On this very notable pitching day in the history of the New York Mets -- with future aces Matt Harvey and Zack Wheeler each starting a game of a day-night doubleheader in Atlanta -- I bring you Masato Yoshii.

I haven't done my "Have You Met?" segment in quite some time, so I figured I would celebrate the occasion of Wheeler's MLB debut with a card of a pitcher who has nothing in common with the Georgia native.  What can I say, I enjoy being random.

Yoshii was one of a handful of Japanese imports that found their way onto the Mets roster during the Bobby Valentine era.  He pitched for the Amazins in 1998 and '99, posting a record of 18-16 with a 4.17 ERA over those two seasons.  That includes a 12-8 campaign in '99 when the Mets won the Wild Card.  He appeared in three games in the postseason for New York, but wasn't exactly effective (8 ER allowed in just 13 innings).  All told, he was a respectable hurler during his time in Flushing. 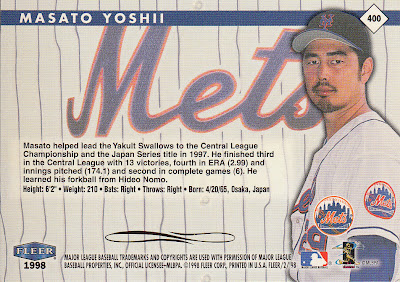 As for the card itself, it's a '98 Fleer Tradition.  A pretty attractive design, both front and back.  The front-side photo is pretty pleasing to the eye.  A well-done Spring Training shot is tough to beat, is it not?

I've only got two cards of Yoshii, and I hope to bump that total to at least five someday.  Hey, for all I know, he may only have five cards to his name.

Yet, it's guys like Masato Yoshii and cards like this one that make card collecting such a neat hobby.