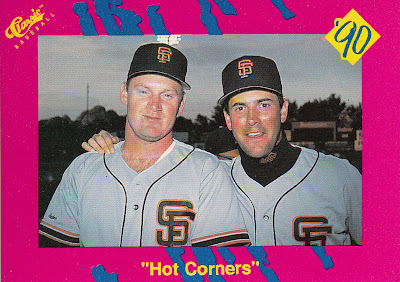 Gee whiz, the rain has finally stopped!  If you live anywhere on the eastern seaboard your world has been plagued by unceasing downpours the past day-plus.  Well, here on Saturday morning in the First State, the sun is out and I hear birds chirping, so things have calmed down.  Of course, parts of my backyard still are acting like temporary wading pools, but at least my grass will be nice and lush in time.  Besides, that just means I don't have to push around the mower this morning :)

Rain isn't the only thing Friday's fortunes brought to Kaz Manor, though, as I received a pair of out-of-this-world baseball card deliveries from our diligent mail carrier.  One package from northeastern N.Y. state, the other from deep in the heart of Texas.

I'll begin with the latter, as it comes to me from a non-blogging collector I've traded with previously.  That is Scott from Austin.  In our first encounter, Scott hit on a bunch of my player collection areas.  This time was no different. 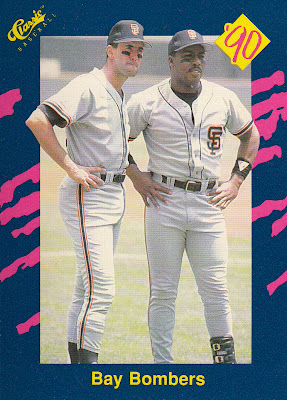 Combo cards of the SF Giants from the early-90s were invariably going to feature Will "The Thrill" with either Matt Williams (man, does he not look a lot like Wayne Rooney or what?) or '89 NL MVP Kevin Mitchell.  Wellp, 1990 Classic took care of both of those permutations.

Of non-Mets players I collect, Will Clark would surely be on my Mt. Rushmore of player collections.  In fact, he's kinda like my George Washington, as he was the first guy I truly collected in my early baseball card days.

Another candidate for that monument would, without a doubt, be Albert Belle.  Through the years, I would always put any cards of Belle's aside when I would pull them from a pack, because I knew he was a special type of player.  But only in the past few years have I really shifted into a higher gear in terms of collecting him. 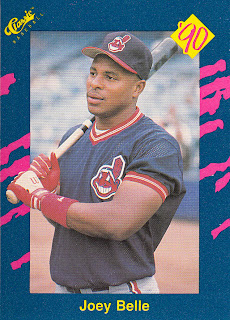 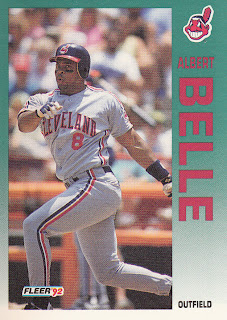 Can you believe it, I'm showing another card from '90 Classic?!  I once stated on this blog that I detested this brand back in the day, and now I'm telling you I wish I didn't.  Every time I see another Classic card from either 1990 or '91, I'm always impressed.  Even with it's totally Saved By the Bell-esque border, I like the photograph and the overall vibe of these cards.  I guess if you didn't grow up during that era (aka the '90s), you probably hate all the wild colors (ahem...Fleer) and color combos.  I hate to say this, and I'll probably end up regretting this in the near future, but I wish Topps would give us a flagship set with colored borders again.  The last time was 2007, we've waiting long enough! 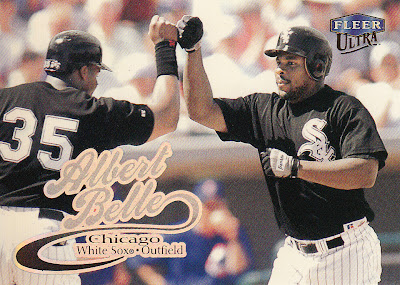 Belle during his days as a basher for the White Sox.  In the midst of a fist-bump and with a cameo from the Big Hurt, how can you not love this card?

Another lock for the non-Mets Mt. Rushmore of player collections is Vladimir Guerrero. 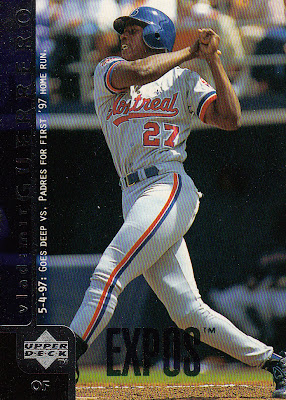 I'm definitely a sucker for Vlad's cards from his days in Montreal, where he was hidden from stardom, playing his home games mostly in front of empty seats.  Do we have any players in today's game that have the combo of power, average, speed, defense and arm strength as Guerrero?

These next two guys would be prime candidates for monument consideration except for the fact that they both played parts of their careers in Flushing, Queens. 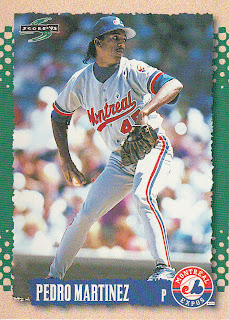 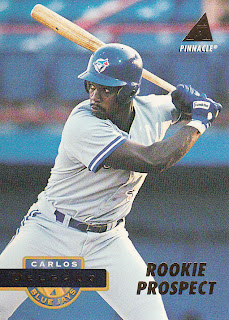 The last time the Mets were relevant, Pedro and Carlos were wearing the blue and orange.  But here, they're donning the threads of their early days North of the Border.  Pedro Martinez and Vlad Guerrero on the same Expos team is stuff of fantasy baseball legend, right up there with Griffey, A-Rod and Randy Johnson sharing a locker room for the M's.  By the way, was 1994 Pinnacle not a breakthrough set for them or what?  Man, I have too few cards from that product.  What a great-looking card!

I'll finish up with the Chief of the Tribe, Carlos Baerga.  If not for his all-too-short stint with the Mets from 1996-1998, Baerga might be the Abe Lincoln of my Mt. Rushmore. 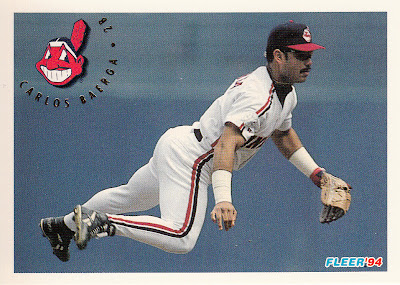 I had a tough time deciding which of the many Baerga cards included in this package was my favorite.  So I'll just show my top four.  Carlos looks like he's acquired some Peter Pan skills in this '94 Fleer.  Just some trust and a little bit of...  Nevermind. 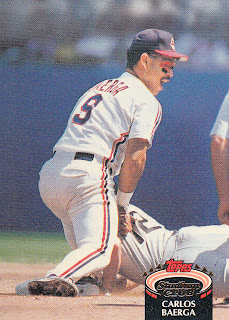 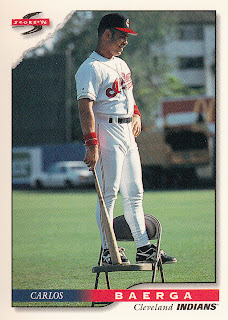 Believe it or not, both of these are conventional photos, given their respective brands.  Of course, we all know Stadium Club was the master of the intense, heat-of-battle action photography.  Meanwhile, I guess around '94 or so, Score carved itself a pretty brilliant little niche by including gobs of quirky scenery throughout its checklist. The only thing odd about this Baerga card from '96 Scofre is that he isn't also brushing his teeth or playing the kazoo. 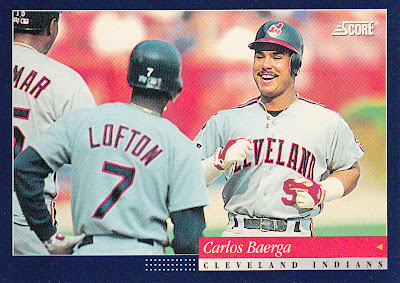 I'd love to get my hands on a complete set of 1994 Score someday.  Judging from the small sampling I've got of the stuff, there are some absolute photographic gems in there.  My best guess here is that Carlos is about to receive a heroes welcome at home plate from Sandy Alomar, Jr. and Kenny Lofton.  What a club the Tribe had back then! 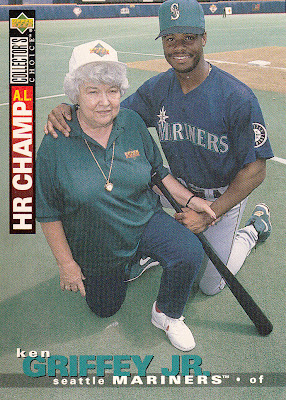 What in the wide world of sports is happening here?!  Surely the Junior Junkie must have a handle on this, right??  Anyhow, this is just one of the handful of great Griffey cards that Scott also included in the mix.

Another absolute winner of a trade package, Scott.  Thanks a million!

I'll dive into Part 2 of the rainy Friday trade extraavaganza in the next day or so.  Til then, I hope you're staying dry, wherever you are...