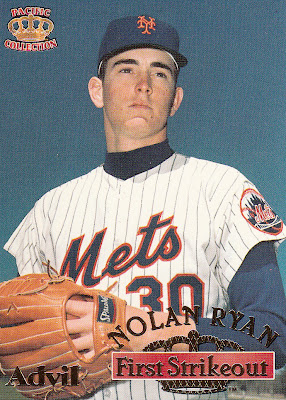 This terrific Nolan Ryan oddball arrived Monday afternoon along with a bunch of other great cards from Weston, the Fantastic Catch fanatic himself.  It seems that the Pacific card company and the makers of Advil put their heads together in 1996 and came up with a series of cards commemorating the career of the Ryan Express.

I don't have to tell you -- you can see it for yourself -- but this is a beauty of a card! 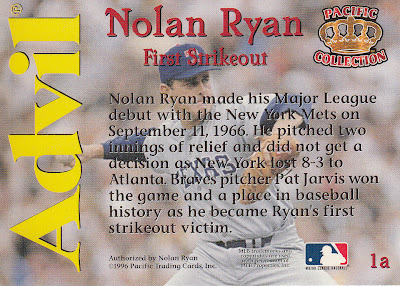 I vaguely remember Ryan 'starring' in a number of Advil commercials back during this time period.  Hey, give the guy a break; it's not like he was doing ads for Depends, Viagra or the AARP.

Anyhow, this is a gem of an addition to my collection.  It's an oddball, a Nolan Ryan card, and a New York Mets card all at once.  Pretty tough to slay that combo.

But, this isn't the only card that I got from Weston.  And, as a matter of fact, it wasn't the thing that prompted me to contact him in the first place.  [Ed. Note: The Ryan, as well as the nice assortment of Mets cards I got, were all neat surprises that Weston included.]

A week or so back, Weston posted a ton of cool trade bait on his blog.  Check it out here; maybe you can drop him a line to see what's still available.

Anyhow, there were two cards that I noticed immediately.  Naturally, I had to get my mitts on them! 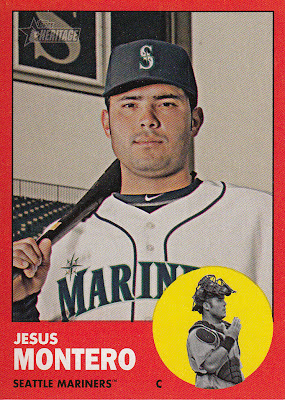 Any of the colored variations from 2012 Heritage are desirable to your's truly.  With this Montero, I'm now 5/9 of the way towards completing a full binder page.  I know: Big deal, Mark.  Well, I like completed pages in my binders, thank you, and I love 2012 Heritage.  The two together are a wonderful pairing. 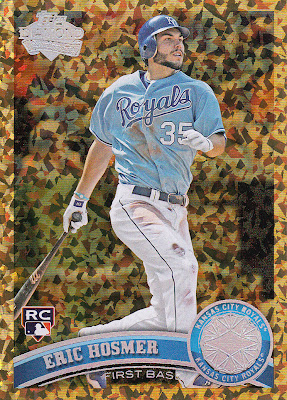 I will never complete the 2011 Topps cognac parallel set.  Won't even come close to getting a third of it done, I'm sure.  But, that doesn't mean I will cease trying to get as many of these cards as possible.  Hosmer's rookie is a nice get, even though his career has seemingly flamed out over the past year-plus.  Plus, the Clubhouse staff is always eager to get samples of the powder blue Royals uniforms into the collection.

I mentioned some assorted Mets that Weston added to the mix.... 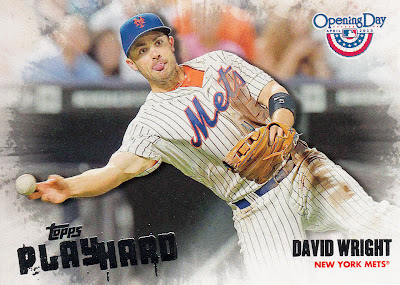 I haven't bought any of the Opening Day product this year.  I've kinda surprised myself on that front, considering I've semi-seriously gone after it the past few years.  I guess I've decided to pool my dollars towards Heritage and Archives instead.  Regardless, I think the inserts from this set are pretty nice, and I always love getting a new David Wright. 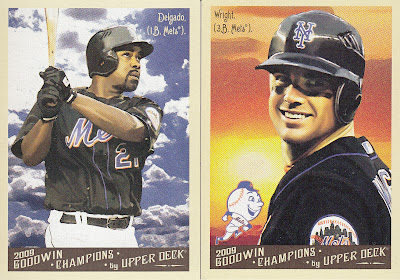 Speaking of David...  A couple of Goodwin Champions cards from 2009.  I can't venture a guess as to why the Wright card features the cartoon Mr. Met in the lower left corner.  Nonetheless, it adds some color and character to what is already a pretty boss card. 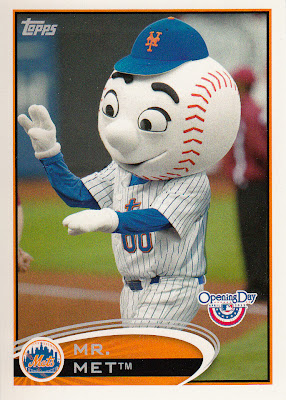 To be fair, a cartoon David Wright should have been placed in one of the lower corners of this Mr. Met card.  By the way, Mr. Met is a trademarked commodity.  Just in case you were wondering.  (In spite of the snark, I really like this card, and any/all cards of Mr. Met.) 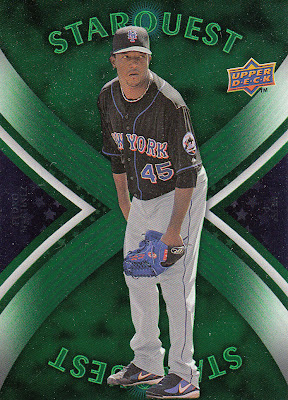 A good finale to any post routinely involves one of the great mound showmen of all-time.  Whenever I watch the floundering Mets, or a Red Sox v. Yankees game, I find myself mising Pedro even more than usual.  Lots of great pitchers in the game today, but no one with Pedro's zest for the game.

I really enjoyed the cards, Weston!  Thanks for putting together a super trade package.  A platoon of cardboard Cardinals will be heading towards southeastern Illinois in the near future...