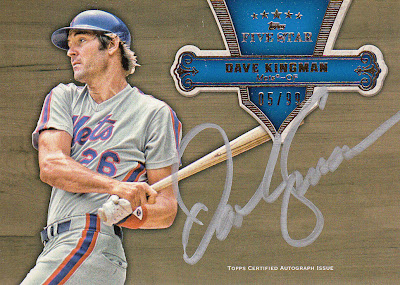 A gentleman by the name of Adam who lives in a place called Schroon Lake, N.Y. (you can just Google Map that for yourself) emailed me last week with a seemingly innocent offer to send "some Mets cards" to your's truly.

Apparently a Dave Kingman Topps Five Star auto numbered to /99 is an example of "some Mets cards" in Schroon Lake!

This card and a whole USPS flat rate box full of other cards -- both Mets and otherwise -- arrived at Clubhouse HQ on Friday.  It was part of the rainy Friday trade package extravaganza that also included the baseball card goodness detailed in my prior post.

I can't think of much to say about this card and about Adam's generosity that would capably approach the level of justice that the instance deserves.  I am as speechless now as I was when I first explored the contents of the box late Friday night.  A word that came to me then, and still lingers now as I type, is WOW!

But, rather than bumble around searching for the right thing to write and the proper way to express it, let's just look at some of the cards that accompanied this beautiful Kingman card... 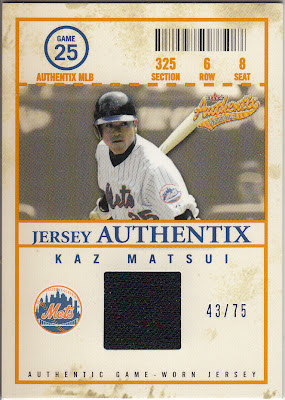 He wasn't much of a player for the Mets, but we here at "This Way..." can't help but appreciate Mr. Matsui's first name.  This jersey relic card is from 2005 Fleer Authentix.  In terms of jersey cards, this is a pretty pleasing one -- not a ton of dead space, plus the swatch is black, which I think always makes relic cards look a thousand times better.

An autograph and a jersey card; if the package were to have ceased here I would still be overwhelmed.
But this is just the tip of the iceberg. 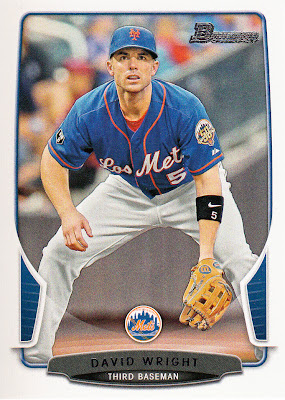 I haven't purchased any 2013 Bowman, nor have I picked up any of the new Bowman cards from shows over the past month or so.  Thanks to Adam, now I don't really need to... 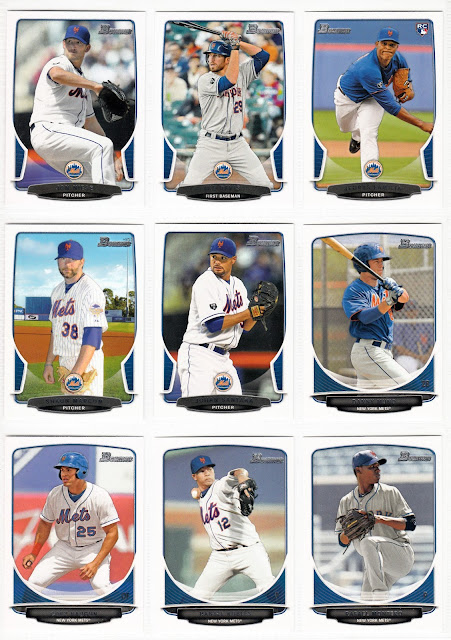 I'm not even sure what the depth of the Mets checklist in this set is, but it can't be much more than this.  I'm more than a little surprised that Shawn Marcum found his way into the mix.  And it's not even a Photoshop job, so that's at least impressive.

Speaking of impressive, here are some more Bowmans... 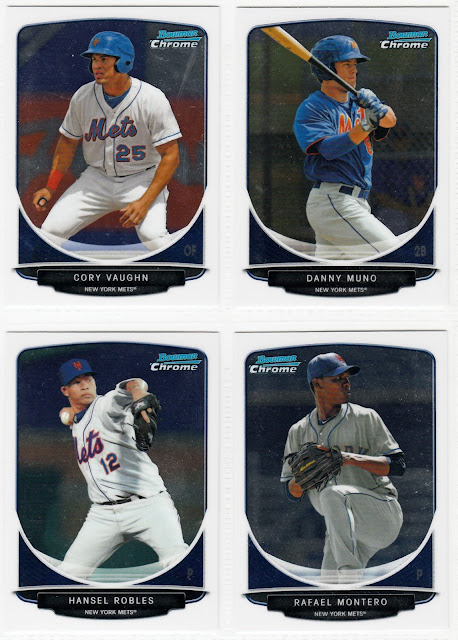 I'll chime in on this year's Bowman design by stating that I like the prospect design, but not a huge fan of the regular base design.  Bowman has been in a rut for the past few years -- and probably even longer than that -- with their designs.  I'm not saying it's awful, but the prhase "mailed in" comes to mind.  If I wasn't paying attention I wouldn't detect much of a switch from last year's offering.

Although I've picked up a few of the '13 Gypsy Queen cards at shows, I haven't purchased any of the stuff from either of the famous retail giants.  Therefore, I haven't had a chance to score any of the retail-only inserts or numbered-minis or SPs. 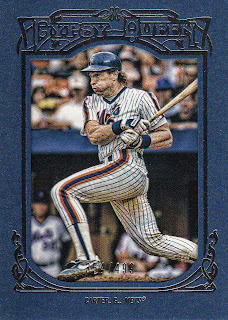 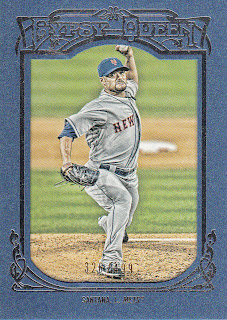 These framed parallels, numbered to /499 are so much more attractive than I had originally figured, only having seen them via other bloggers as well as eBay.  Even the fact that this Gary Carter image has been recycled umpteen times doesn't take away from the majesty of this card. 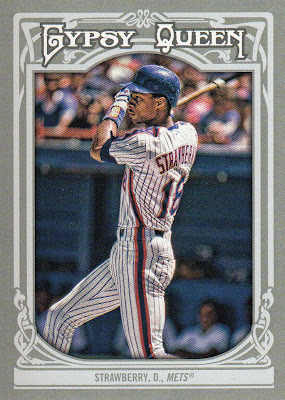 This Straw is part of the short print portion of this year's GQ.  Unlike Heritage, the SPs from Gypsy Queen are sprinkled throughout the checklist, rather than tacked onto the end.  So it's kinda hard to tell what's an SP or not at first look.  Thankfully, I'm not a GQ set collector (not yet anyhow), otherwise I'd probably go cuckoo. 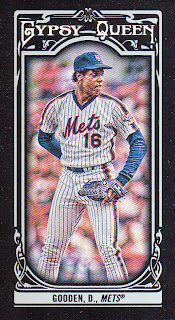 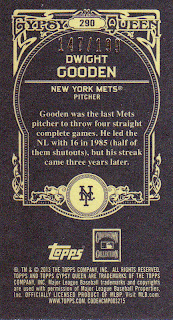 I've slowly but surely started to gather some minis into my collection.  I'm still not completely head-over-heels in love with them like many others out there, but specimens like this Doc Gooden black-bordered mini make me understand the infatuation.  Sharp!  It's numbered to /199, in case you can't make it out from the scan.

And some more minis... 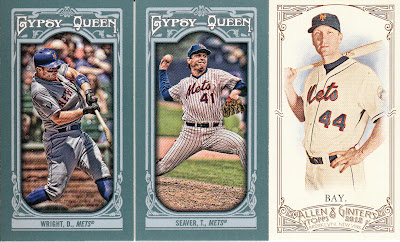 Two more from this year's GQ plus a Jason Bay from last seasons' Ginter output.  Wright, Seaver and Bay.  Obviously, one of these guys is a tad out of his element, no? 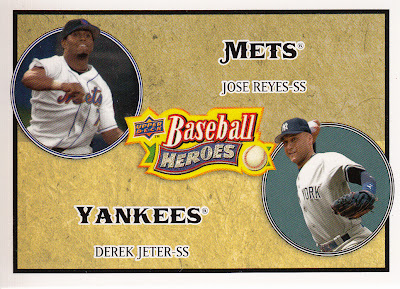 The 2008 Baseball Heroes collection by Upper Deck was a set that bypassed me big time, and I've always kinda been remiss about that.  The layout was simple, but the logos and design gave the cards a retro feel that took the collector back to the early days of UD cards.  In my opinion, that's not a bad place to be!

Thus, I was only too pleased to find a nice run of Mets from the '08 Baseball Heroes product in the box... 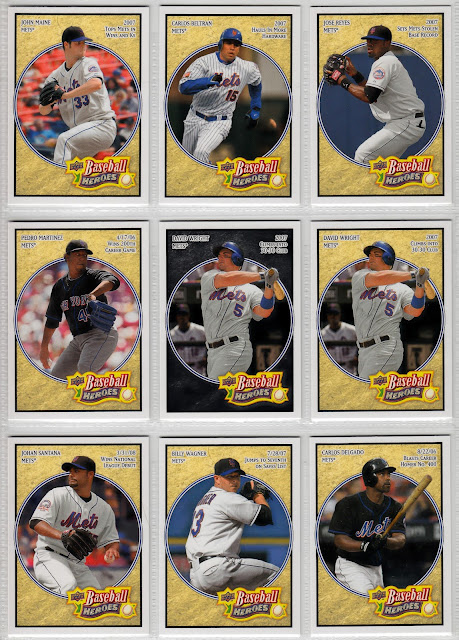 For those mostly in the dark about this product (like me), the middle card is a black variation of the David Wright base card.  After a little homework, I learned that there are also "charcoal" and "emerald" parallels of each player's base card, both of which are numbered.  That sounds kinda frustrating for a player or set collector, but it also sounds like a pretty fun collecting adventure to undertake! 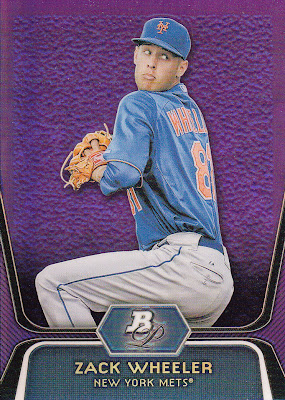 This is one of those take-your-breath-away kind of cards.  Wheeler, one of the Mets top pitching prospects -- and also the headline guy coming back from San Fran in the Beltran trade -- is inching closer and closer to his seminal big league call-up.  Right now, he's still working on his craft for Triple-A Las Vegas.  Heaven knows, the Mets need as many reasons as possible to keep the interest and attention of their beleaguered fanbase. Anyhow, back to the card, and I think purple was by far the snazziest hue for the Bowman Platinum refractors in 2012.  I'm lovin' this card! 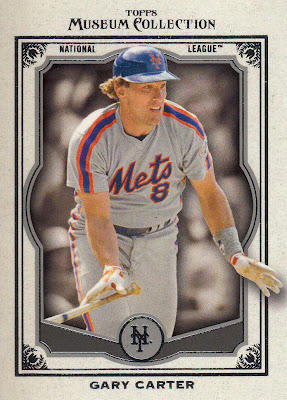 Topps Museum Collection is a high-end product that I don't have any experience with or expose to.  Rarely will you come across any of these cards in a discount box or dime box.  At least in my travels.  And it is thanks to Adam that this 2013 Museum Collection card finds its way into my Gary Carter collection.  Not to belabor the point, but I'm sure Topps has hundreds of images of Carter (and every player) at their disposal, yet...  Ah, nevermind.  You know the song and dance by now.

The box of goodies from Adam included Mets in Chrome... 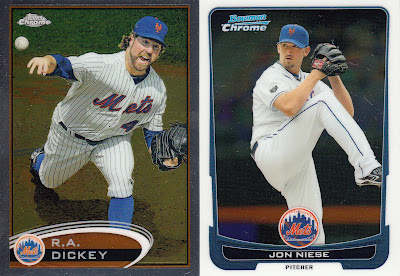 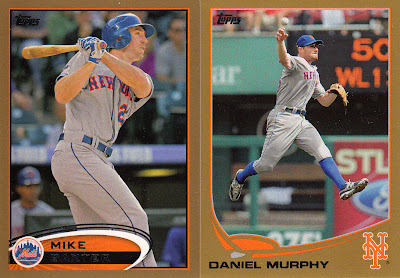 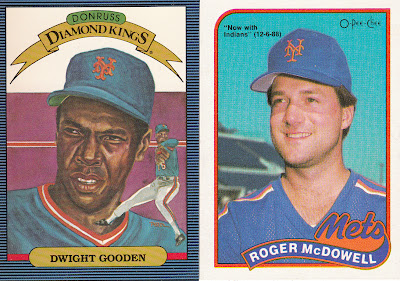 Mets, Mets and more Mets.  Always a beautiful thing, because even though the team is a flop these days [Ed. Note:  Can you believe it? A loss in 20 innings to the Marlins?!], the blue and orange uniforms never get old on the eyes and to the heart.  What can I say?

Ah, but there were other big-time components to the box that extended beyond the boundaries of the Metsies.

For me, and as far as my current-year collecting goals go, 'big-time' means colored parallels.  Specifically the blue variety. 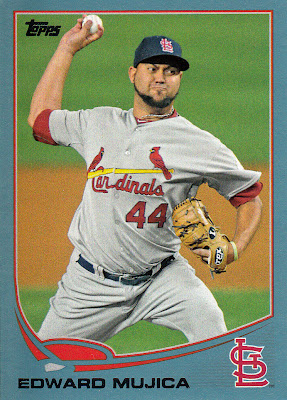 I've gone a while without adding any new blue variations to my 2013 Topps Wal-Mart Blue project.  This Edward Mujica is the 241st step in my journey to put together all 330 cards from the Series 1 set.  I'm 73% of the way towards the finish line!

Series 1 Topps isn't the only set with colored variations that I'm chasing.  While I may not have my eye on the ambitious goal of completing each of the Wal-Mart and Target 25-card variant sets from this year's Heritage, I'm trying to get as many of them as I can. 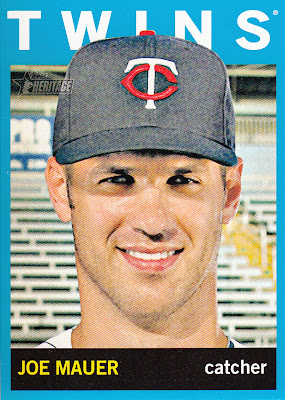 Joe Mauer's addition brings me to 12 of the 25 cards.  I'd be thrilled to reach 18, so as to complete two binder pages. 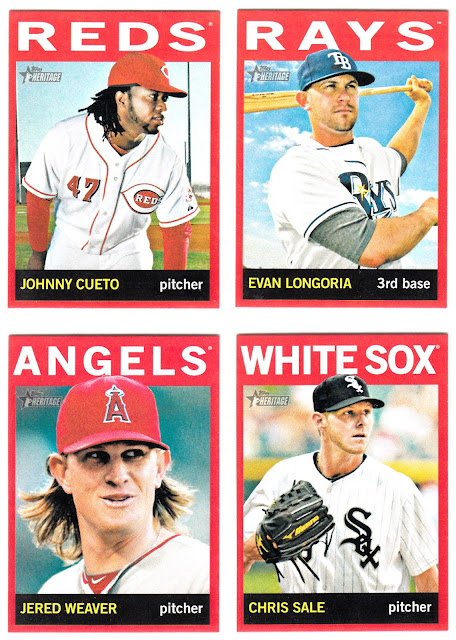 Meanwhile, I only owned one of the Target red-borders until now.  What an awesome four-pack, with the Longoria being my favorite of the lot.

Whew.  Okay, there you have the prime highlight of a most unbelievable box of cards from Adam.  From my email exchanges with him, I learned that Adam was just looking for a good home for these cards.  And while he enjoys ripping packs and rekindling the joyful sensations of more youthful days, he doesn't collect any players, teams or sets in particular.

And boy, am I glad my silly little blog came to mind when he was plotting out a destination point for these treasures.  It's like winning a blogger lottery!

Adam, I can't possibly thank you enough for having me in mind and sending these cards.  Keep in touch, and by all means let me know if I can assist you with any hobby and/or collection needs down the road.