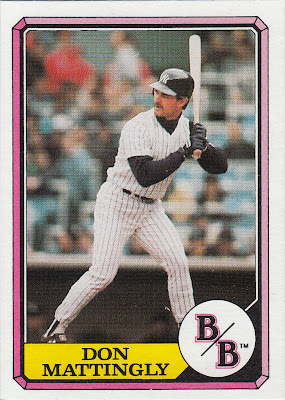 Oh, you're not down with RPA?  That's Runs Produced Average, of course.

Y'see, I had this 1987 Boardwalk and Baseball "Top Run Makers" set -- one of the seemingly hundreds of oddball boxed sets produced by Topps during the '80s -- on my eBay watch list for what seemed like an eternity. And a few months ago I finally pulled the trigger and grabbed one of the 33-card sets.  Naturally, I love it to pieces.

But, while the card design and photography are both enjoyable, the true uniqueness of this set can be found in the sabermetric delight found on the reverse side. 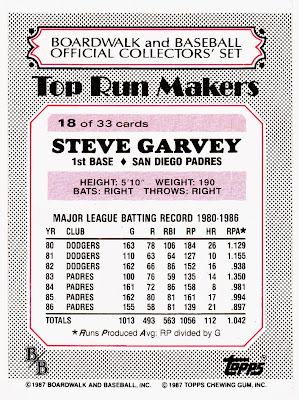 Talk about revolutionary!  Ahead of its time?  I think so!  Sit on it, WAR!

Now, I understand that the whole RPA thing never launched into the upper atmosphere of the game and the analysis thereof, but kudos to the Topps folks for taking a different tack when drumming up these boxed set off-shoots.  It's different, we can all agree upon that.

And, it's not like this is a throwaway number.  To me, personally, I find it interesting to know that Steve Garvey was individually responsible for producing 1.04 runs per game for his career through the 1986 season.

Do players get contracts based upon this number?  Have they ever?  Will they ever?  Well, I'm sure Beane's pocket protector posse uses some derivation of this statistic when convincing themselves and the world that they know more about baseball than you do.  Whether they use the "RPA" designation for it is beyond my research (or desire for research). 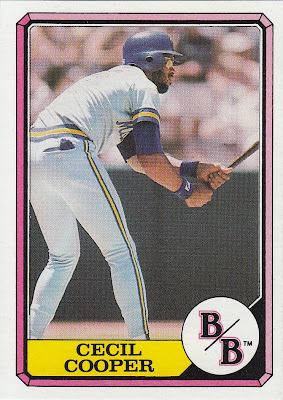 In the big picture of baseball cards, though, does any of this desk jockey stuff really matter?  It's still just another number on the back of a bubble gum card.  Whether the card back features oodles of numbers, amusing cartoons, or trivial tidbits in which a mother could barely feign interest, a baseball card only captures you as far as the presentation on the front.

As far as my tastes are concerned, this set hits a home run.  I generally adore most any of these Topps oddball outputs, but this one likely sits at or near the top.

And I don't need any fractions or formulas to tell me that.