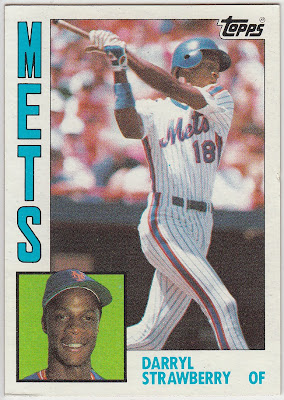 Unfortunately the bounty of Buffalo Bills cards that Adam from Upstate NY sent me recently didn't equate to a victory for Doug Marrone's team.  But, I can hardly blame Adam for that; I think Jeff Tuel's goal line interception and subsequent 100-yard return for a TD by the Chiefs had a little something to do with Buffalo's setback.

In any event, the cardboard cornucopia from Adam didn't stop with football cards.  Actually, the brunt of the package consisted of baseball cards, mainly of my beloved New York Mets.  Everything from iconic rookies (see above) to autographs to commons of utility players.  In other words, a little bit of everything that's best about collecting!

The '84 Topps Strawberry is such a great card, I couldn't not use it as the post's header.  And it's pretty representative of the greatness included in the lot of cards that have joined my collection.

Let's take a gander what else Adam included in his most recent package of incredible goodness... 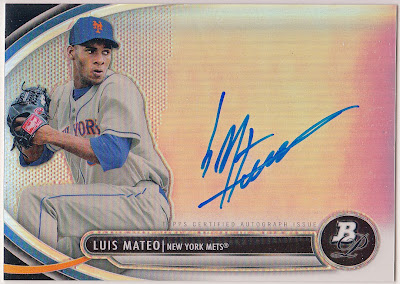 Man, these Bowman Platinum autographs are white hot!  Simply a beautiful card.  Certainly not the most attractive autograph, but it hardly detracts from the card's awe factor.  As for Luis Mateo, the fireballing prospect unfortunately met a premature end to his season in June in a manner that's a little too familiar to Mets fans: Tommy John surgery.  Ugh.  I guess he and Matt Harvey can make a few play dates during the 2014 season. 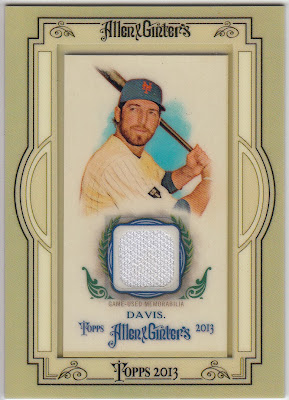 I've never had the pleasure of owning one of these A&G framed mini relic cards before.  I've seen them on other blogs and on eBay and the like and I've kinda dismissed them as much ado about nothing.  Boy was I misguided.  These things are awesome when you've actually got one in your mitts.  A great piece to the collection!  Though I'm not sure what the future holds for Ike, at least as a New York Met.  Regardless, a fantastic card. 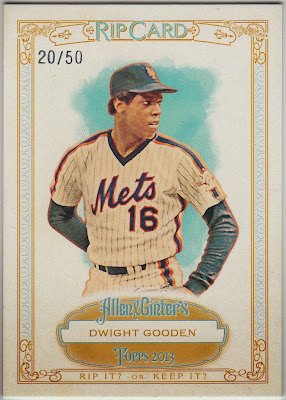 Rip card?  What's a rip card?  Wasn't familiar with these until Adam's latest shipment.  Apparently they have some sort of little treasure inside the card, like a relic piece or a special mini card.  And you rip the tab on the pack to reveal it--or not, if you'd like to keep the card intact.  This one was already ripped, but it doesn't matter.  It's a truly one-of-a-kind card of Doctor K, numbered to 50, no less.  But, Adam, do tell what was inside! 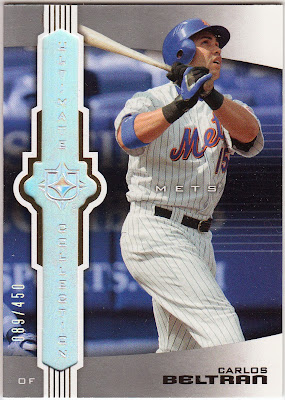 Upper Deck's 2007 Ultimate Collection produced this snazzy card of Carlos Beltran, numbered to 450.  Not to sound like a broken record, but I've never come across this brand before either.  Very sharp!  I'm wondering where Beltran will wind up in 2014, as he's currently a free agent.  I hope it's not the Yankees; I'd rather he stay in St. Louis, personally. 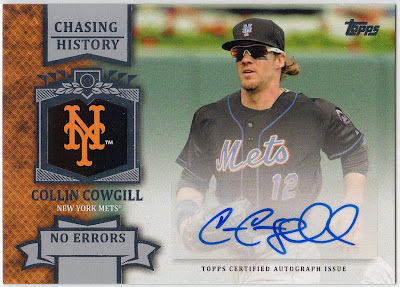 Collin Cowgill made the Mets opening day roster and actually cracked a grand slam against the Padres in the season's first game (sorry, Marcus!).  However, he didn't make it through the season with the Mets and, unless I'm mistaken, I think he finished the year in the Angels organization.  Anyhow, this is a totally rare piece because it's the only card of Cowgill as a Met.  Yes, it's an obvious airbrush job, considering the Mets didn't wear black unis or caps this year, but that makes little difference.  This is such a strange player choice for Topps to include as an autograph, much less a "Chasing History" subject.  And, "No Errors?"  Just, wow, strange!  But this is a most unexpected and treasured addition to the All-Time Mets Project for sure!

Oh, speaking of the ATMP, Adam's package contained some additional entries on that front... 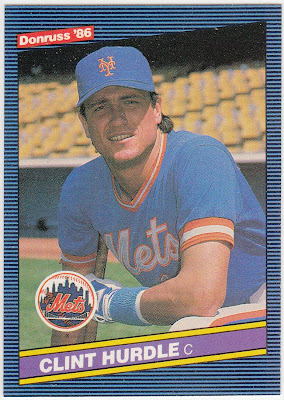 Clint Hurdle, this past year's NL Manager of the Year, played parts of three seasons for the Mets, including stops in 1983, '85 and '87.   In 59 games as a Met, he put together a .195 average and just three home runs.  He was the true essence of a utility player, as he played both corner infield spots, both corner outfield spots and, as the above card notes, catcher. 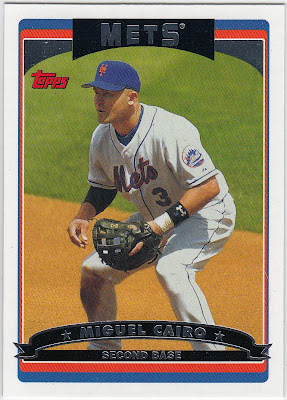 Miguel Cairo played for seemingly half the teams in Major League Baseball (well, nine actually), including one season for the Mets in 2005.  He batted .251 in 100 games for the Amazins, collecting 20 extra-base hits and 19 RBIs. 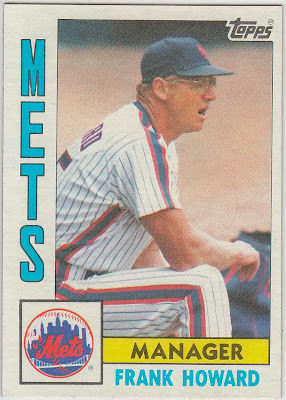 Nicknamed "Hondo" during this playing days, Frank Howard served as the Mets interim manager in 1983, guiding the club the final 116 games of the season.  He bridged the gap between George Bamberger and Davey Johnson.  He would again join the Mets in the mid-90s where he served as a coach on Dallas Green's staff.

Some other gems from the package... 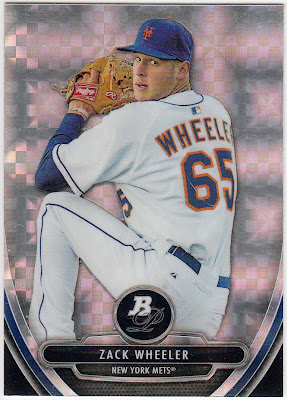 I'm so lost when it comes to some of the terminology Topps/Bowman use for these parallels.  I assume this is some sort of refractor?  Then again, what difference does it make?  You could call this a banana split and it wouldn't take away from the brilliance of this card. 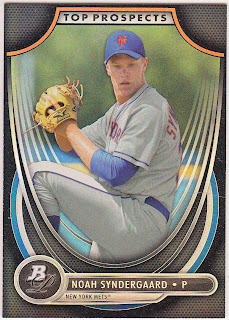 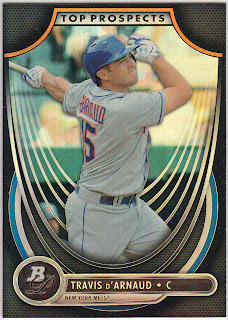 These two guys hopefully will comprise the Mets battery for a very, very, very long time.  Travis d'Arnaud made his big league debut this past summer, while Noah Syndergaard dazzled opponents and scouts alike with his dominant repertoire in the minors.  The former Blue Jays draft choice is regarded as one of the top two prospects in the Mets system, and could be appearing at Citi Field in the near future. 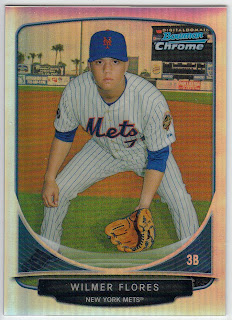 Mini, shiny Wilmer!  Flores is another guy who could be a part of New York's long-term plans.  The guy can hit, we know that.  It's just a question of what position he can play in the bigs. 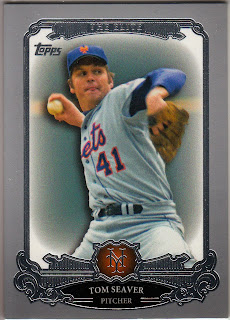 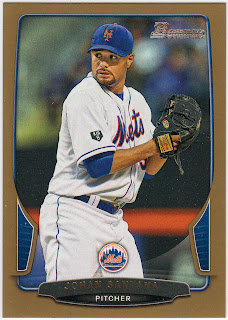 A couple of hurlers who made history for the Amazins.  Geroge Thomas Seaver snagged three Cy Young awards during his Mets career and, oh yeah, a World Series title for the Miracle Mets in '69.  Johan, meanwhile, hurled the first-ever no-hitter for the Mets when he blanked the Cards in 2012.

And we'll finish the highlights with this little bit of quirkiness... 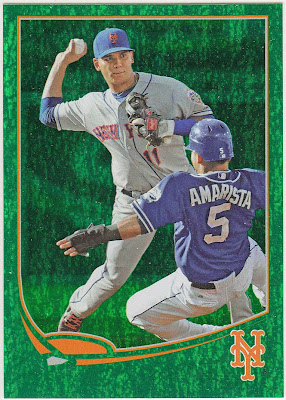 Ruben Tejada, right?  Right.  No name on the front of this one; Topps quality control at its finest!  Definitely a cool collector's item.

Once again, you've made me a very happy collector, Adam.  Thanks for the incredible loot!