I was able to add to new players to my All-Time Mets Project recently thanks to Steve D. from Brooklyn. 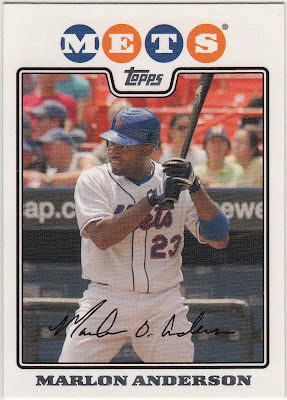 Marlon Anderson was one of my favorite Mets from the Willie Randoph/Jerry Manuel era in the mid-to-late '00s. He actually had two stints in New York: a 123-game sample in 2005 and then a three-year stay lasting from the 2007 trade deadline to the end of his big league career in 2009.  In his four years as a Met, Anderson compiled a .253 average with 11 homers and 54 RBIs.  But more so than his contributions at the plate, Marlon's real value was in the field, where he played almost any position the team needed. 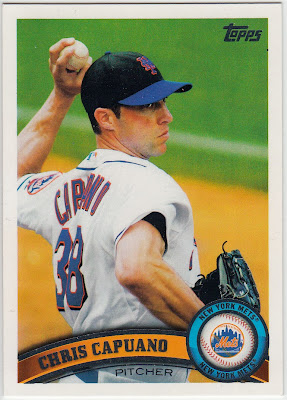 Southpaw Chris Capuano was rescued off the scrapheap by GM Sandy Alderson in 2011, and he turned out to be a pretty solid starter for the Mets in his lone season in Queens.  In 33 games (31 starts), the Duke product crafted an 11-12 record with three complete game efforts.  Capuano became a free agent after that season and subsequently signed with that blue and white team in Los Angeles.

Thanks for sending these along, Steve!

I'm making pretty decent progress with the ATMP.  Check it out, and if you've got any of the players I need -- as long as they're in Mets colors -- drop me a line and I'll gladly work out something with ya.