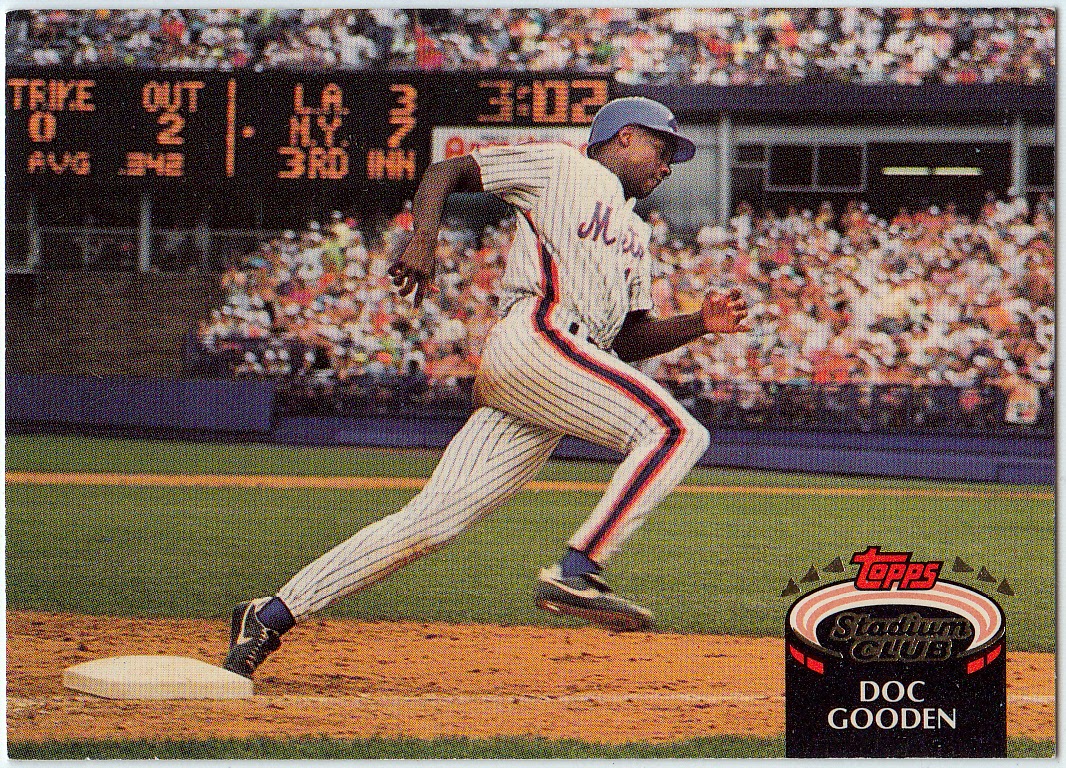 The monthly card show at my local firehouse is upcoming this Sunday and, under normal circumstances, your's truly would be in attendance taking full advantage of the many discounted pieces of cardboard joy.  But, y'know: new baby, family coming to the house to visit said baby since it's the weekend... yada yada yada, as they say. Hey, no biggie, it comes with the turf.

Lucky for me--and the rest of the card-collecting and card-blogging world--there's a guy named Nick who merrily writes a wondrous blog called Dime Boxes.  Well, the planets must be properly aligned because a robust package from Nick arrived in my mailbox just the other day.  With such perfect timing, who needs a crummy card show?  I got delivery!  (Hey, top that, Domino's!)

The above '92 Stadium Club of Doc Gooden is one of the best cards ever (over)produced.  It's not only one of Gooden's best-ever cards, it's probably one of the top five greatest TSC cards ever made.  Furthermore, it's among the most awesome non-traditional pitcher photos you'll find on a baseball card.  In other words, you might say this would make a good business card for Nick!

Pretty fitting, then, that this Doc masterpiece was among the many cards Nick put in the package. Sure, it's a card already in my collection, but that doesn't make it any less impactful or meaningtful.  Every time I see it I'm reminded of how unparalleled a card it is in so many ways.  That said, I'd happily accept 1,000 more. 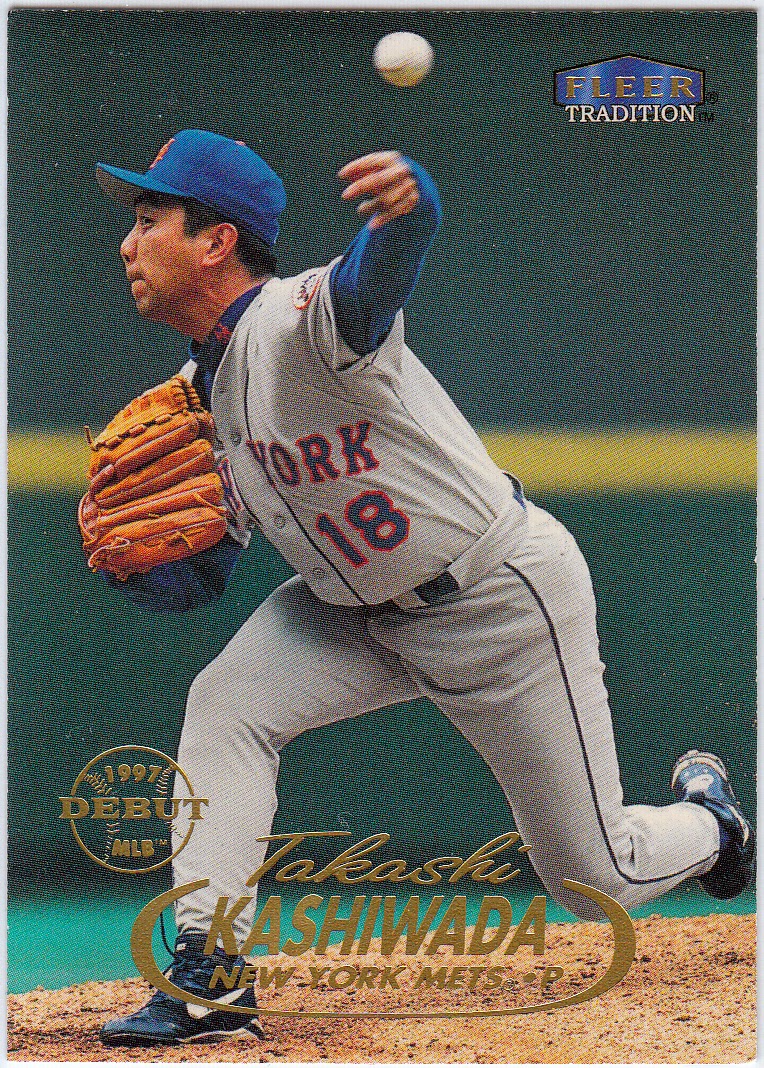 Nick's a guy who keeps a pretty regular eye out for some of those lesser-known Mets players lacking from my All-Time Mets checklist.  He hit the jackpot with this one.  Takashi Kashiwada made his big league debut for the Mets in 1997, becoming the first Japanese-born player to wear the blue and orange.  I wasn't even sure they made a card of him, but now I've got one for my collection.  Considering TK was probably at the top of my most-wanted Mets list, this is a pretty big deal. 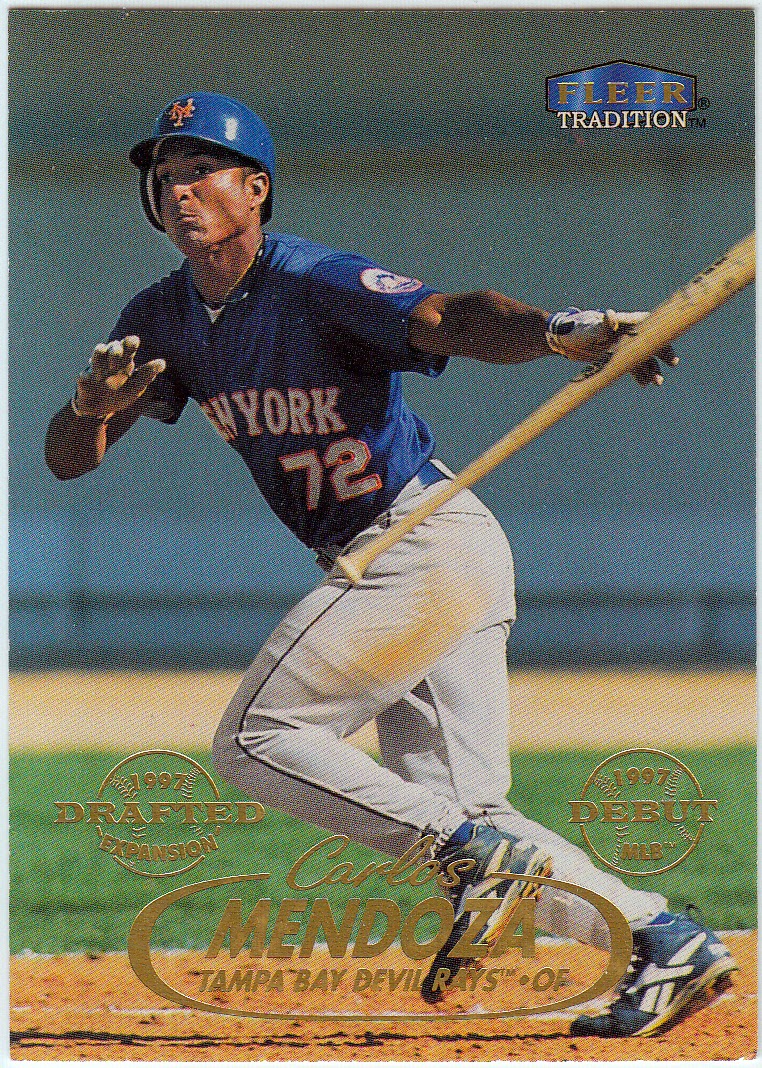 Then there's Carlos Mendoza.  Sure the card reads "Tampa Bay Devil Rays" but all I see is a blue jersey top and an orange NY on the batting helmet.  Unlike Kashiwada, I don't remember Mendoza's cameo for the '97 Mets. Heck, I didn't even have him on my list of players to get.  So this is a most unexpected and happy discovery. 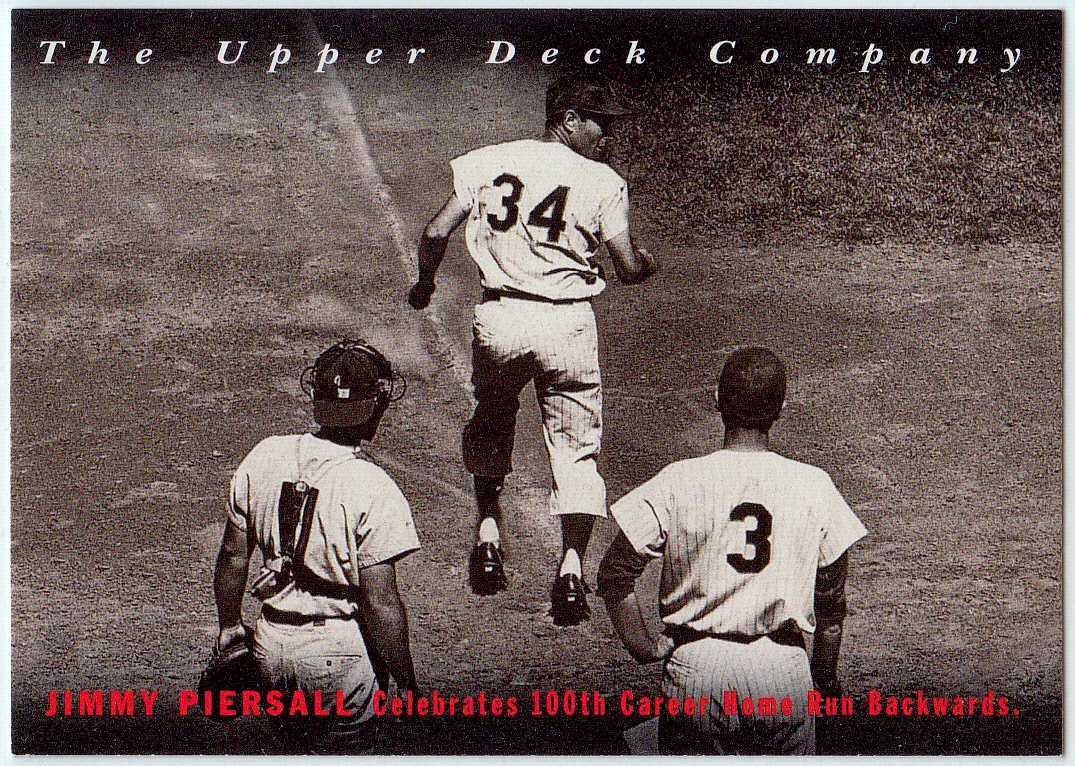 If there was ever a "That's So Mets" moment, Jimmy Piersall may have clinched in back in 1963.  This beautiful card captures one of the zaniest moments in Mets and baseball history, and will make a tremendous addition to the ATMP binder. 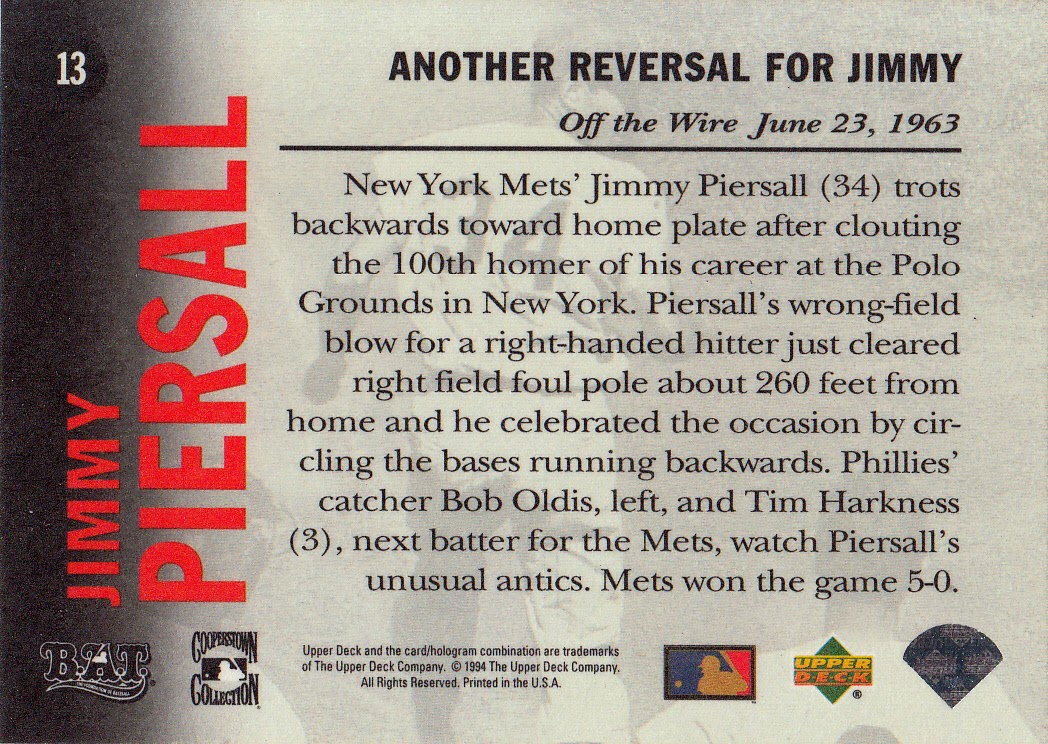 If you've never seen "Fear Strikes Out," I most definitely recommend checking it out.  It paints a pretty vivid picture of a tortured man.  Plus, you can't beat the cast (Anthony Perkins, Karl Malden). 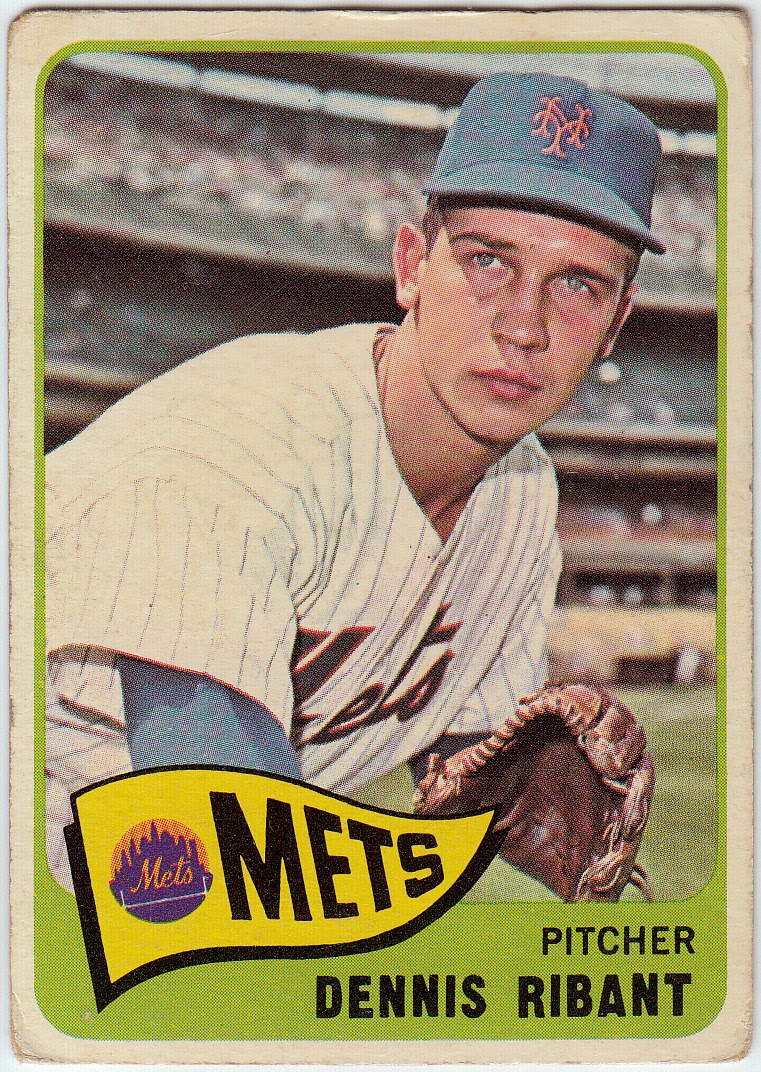 Dennis Ribant is one of the many vintage Mets I was missing.  And it's a purdy '65 Topps, to boot.  Which reminds me, we're only a couple months away from 2014 Heritage which, by the way, celebrates the '65 set. Can't wait! 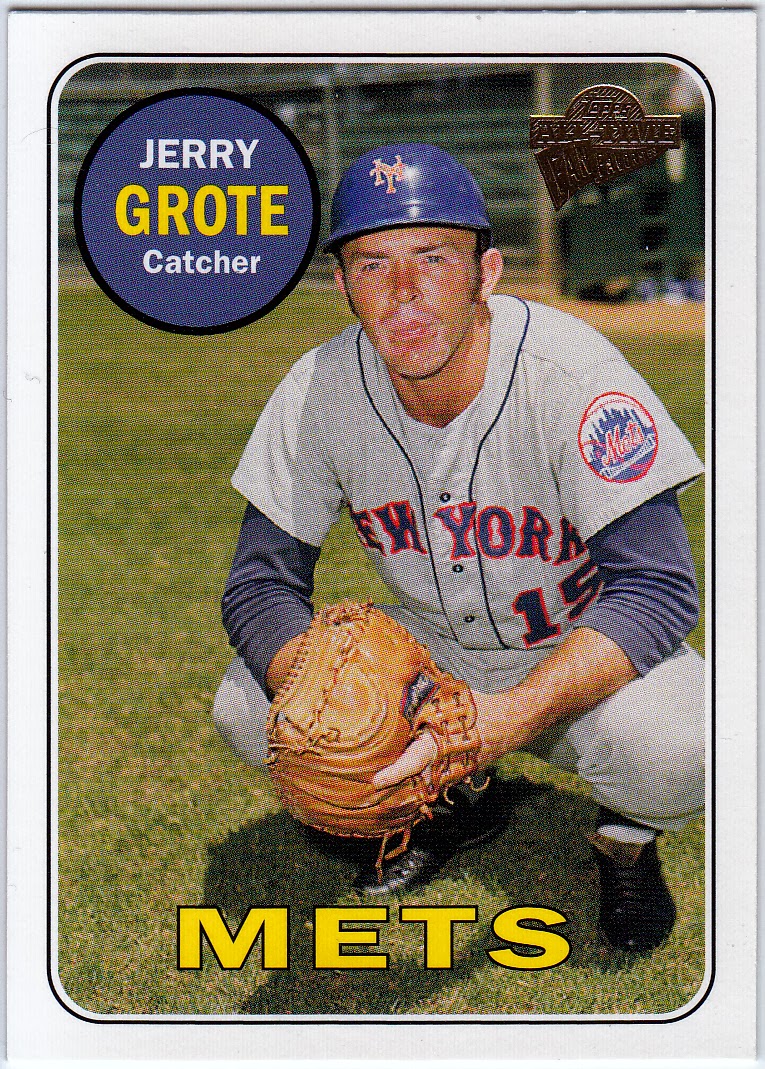 What a perfect example of the greatness of Topps All-Time Fan Favorites.  Grote was the catcher for the '69 World Champs and was one hell of a backstop for a good many years.  This card will fit nicely into the ATMP collection. 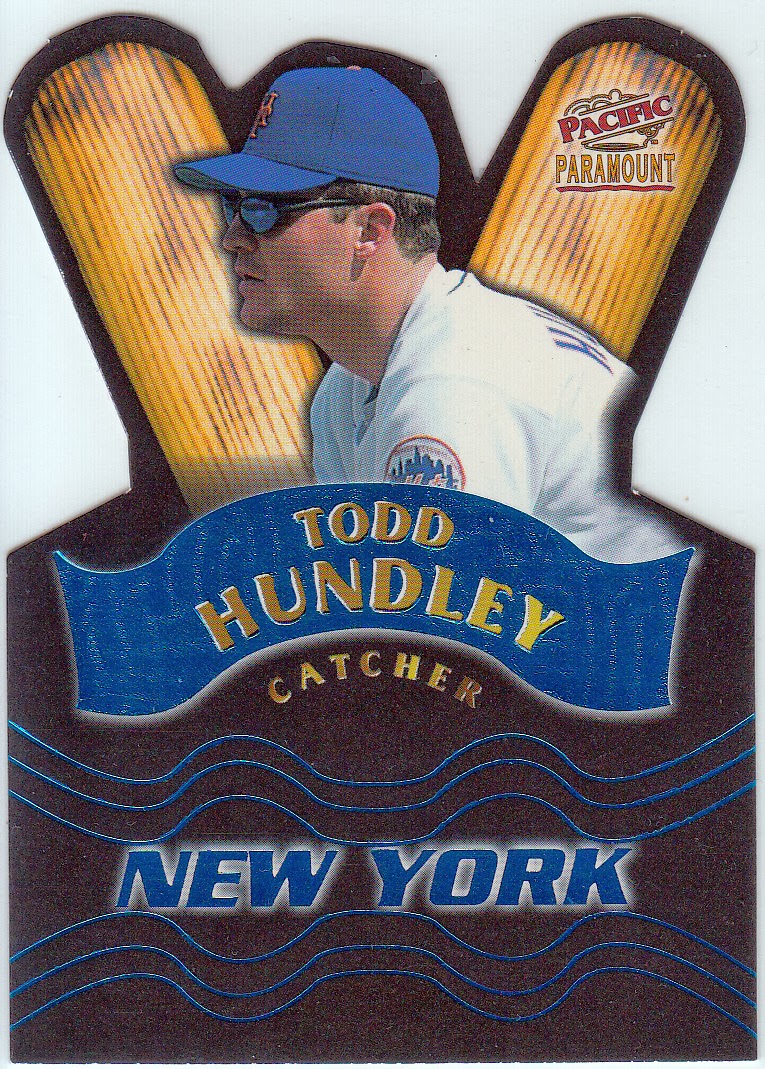 This card doesn't exactly fit the bill of a card I'd include for the All-Time Mets Project, but what a freakin' great card!  Certainly one of the coolest Todd Hundley cards in my collection, and definitely the most unique.  As an aside, I liken the Pacific brand to an onion: you keep peeling back the layers and discovering more...layers.  Just tremendous! 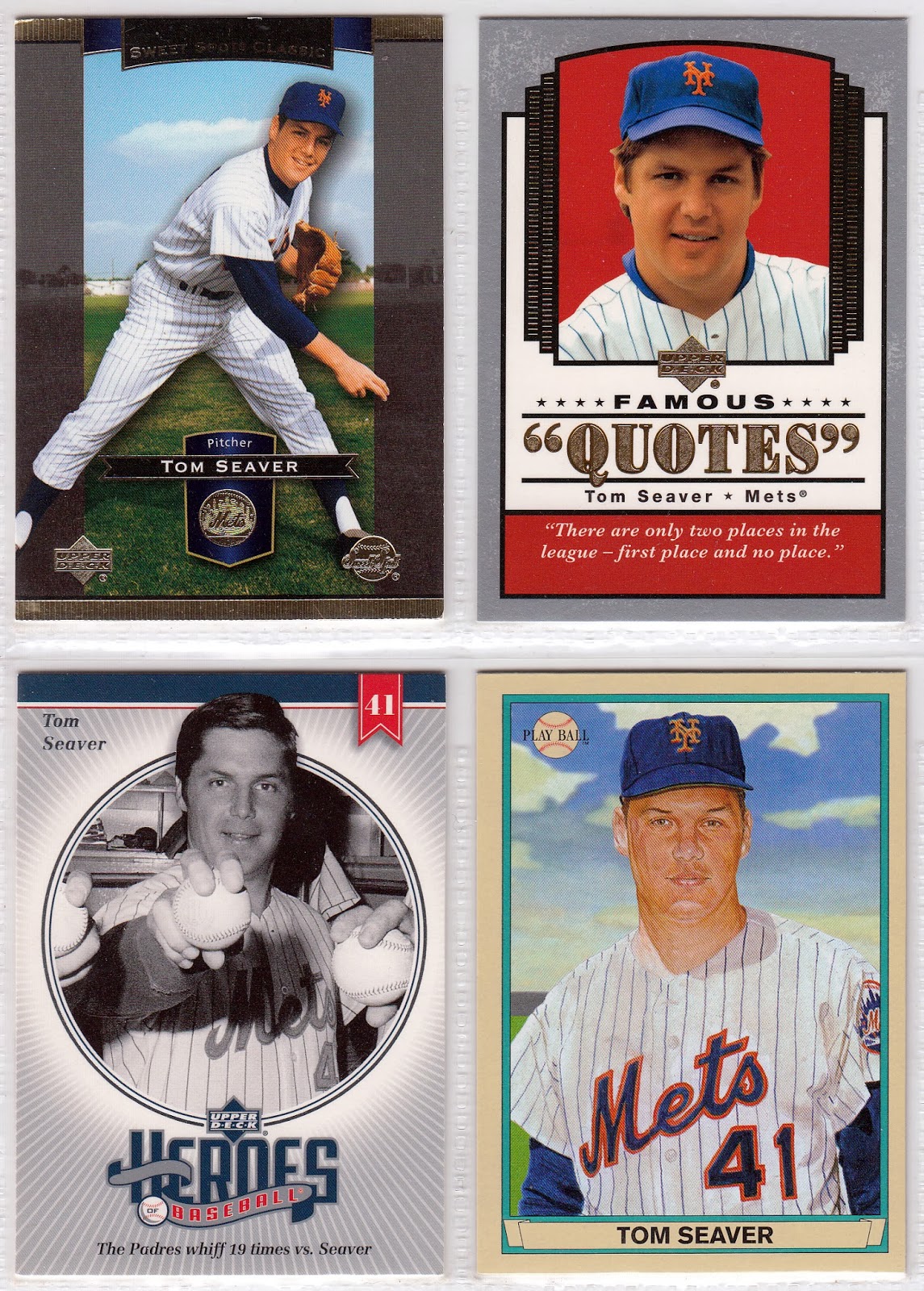 Get a load of this dominant quad of Seaver cards.  George Thomas is greatest Met that God ever created (and probably ever will).   By virtue of that, it's my godly duty to grab up as many of his cards as possible.

But, it's not all about Mets with packages from Nick.  He always hooks me up big-time with cards for my various player collections. 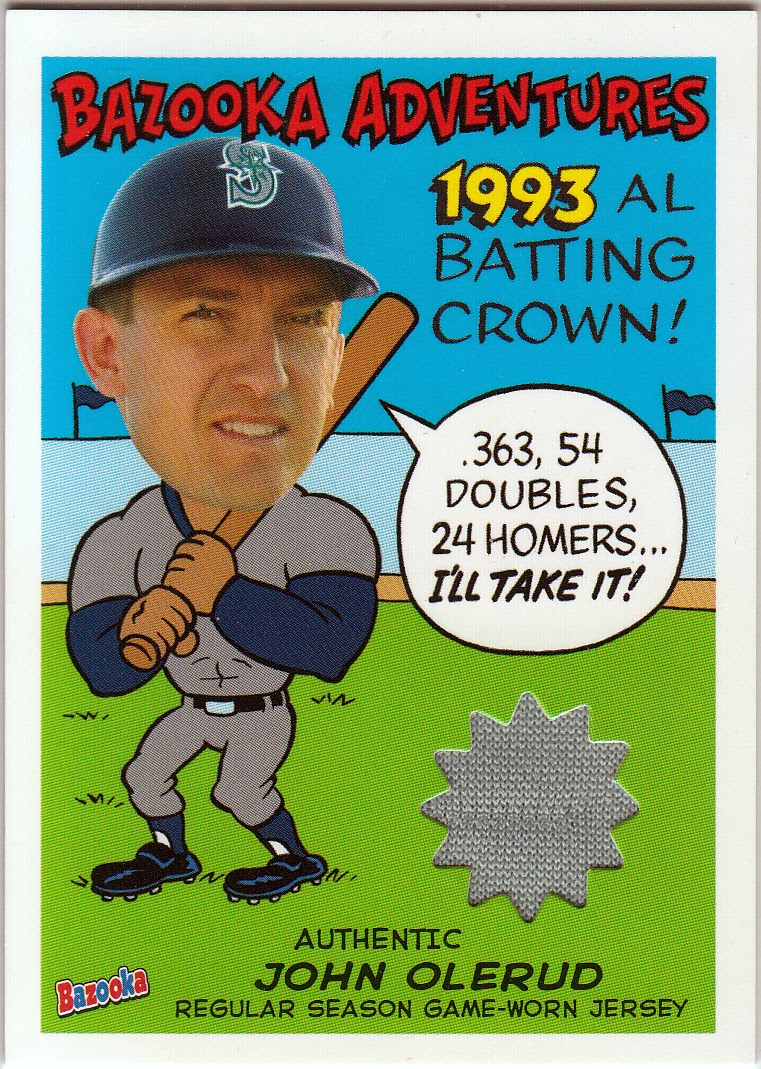 Boy, does Johnny O wish he had the type of physique that the cartoonist bestowed upon him.  It's a Bazooka cartoon and a jersey card?!  I love this country!  From one Olerud collector to another, I most definitely appreciate this neat card. 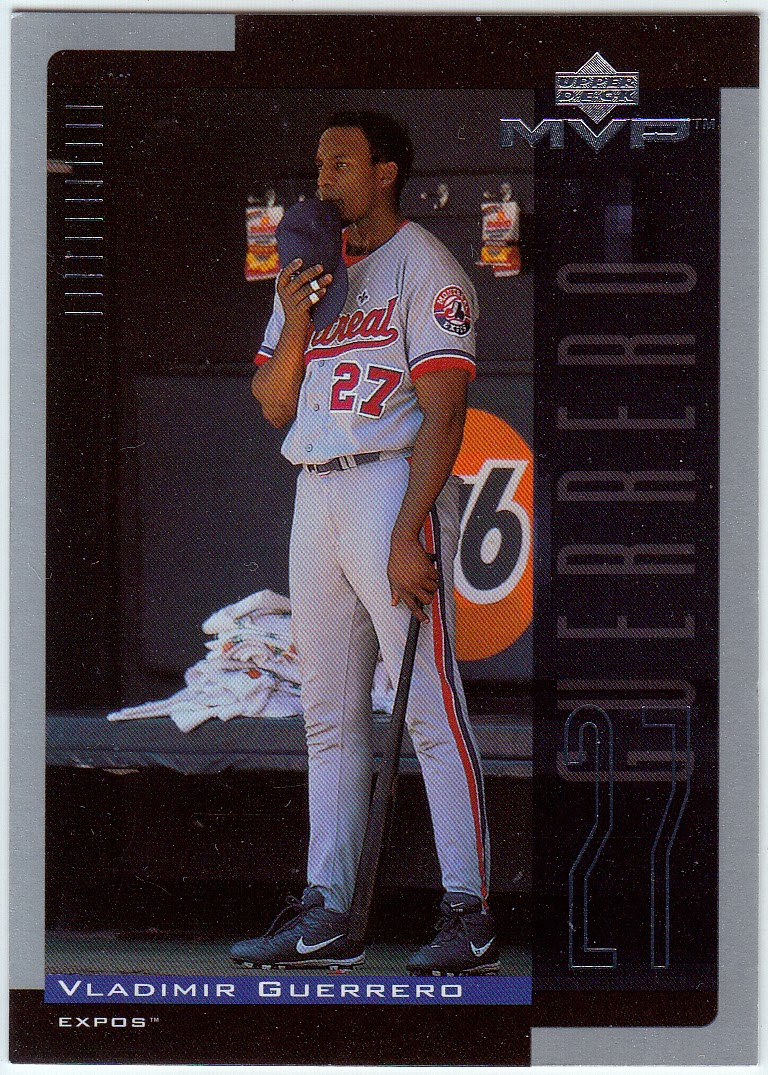 Nick and I also share a love of Vald Guerrero cardboard.  It was tough to choose a favorite among the bounty he sent me, but the unique pose and the setting (Jack Murphy dugout?) on this Upper Deck MVP card make it a true standout. 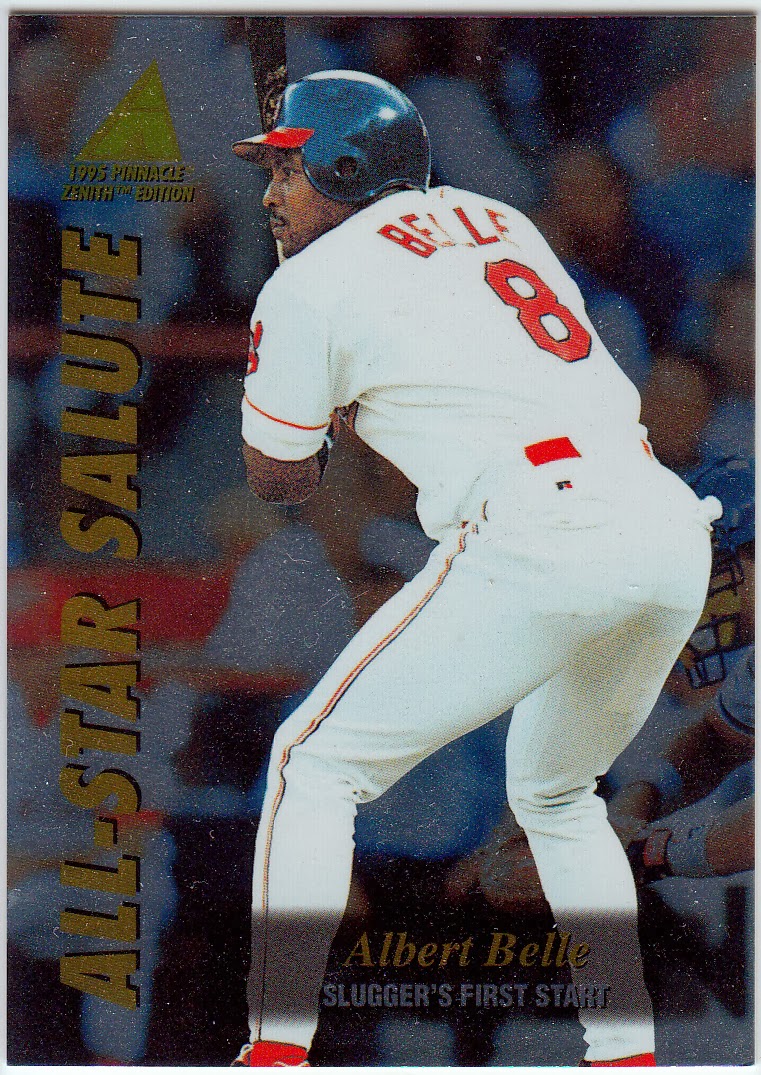 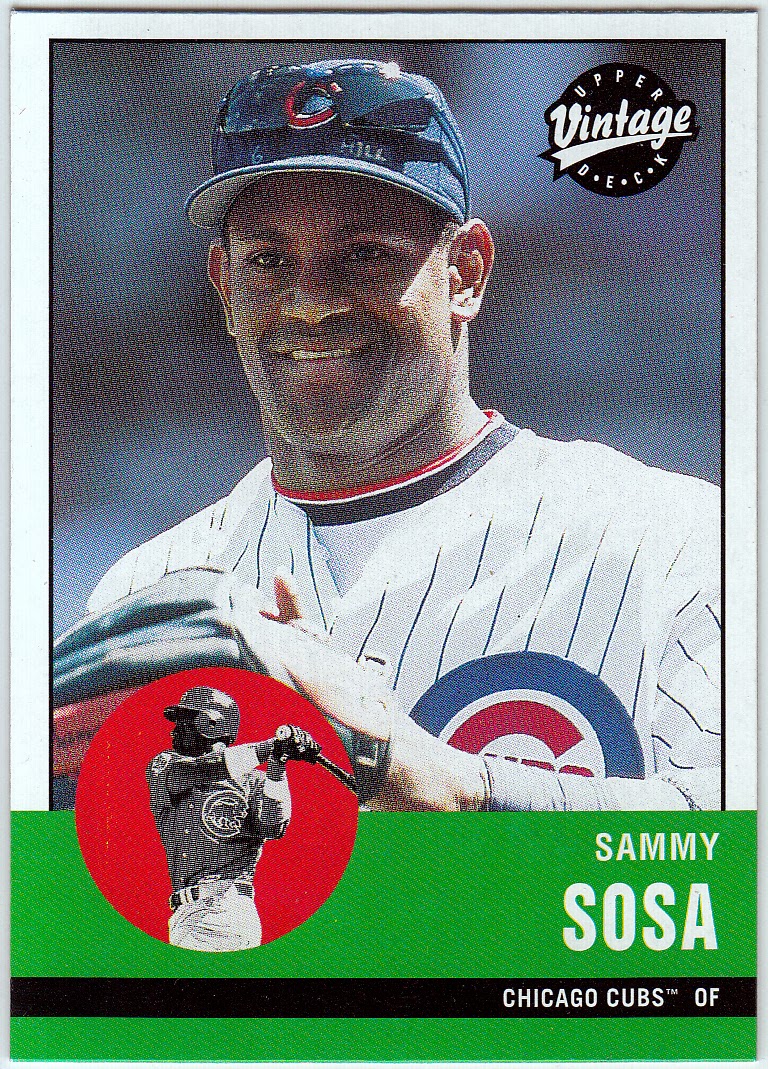 What, you don't like Sammy Sosa?  Too bad, I do!  Even when he's on a "Vintage" card that is an obvious a shameless rip off of a classic card design from another company. 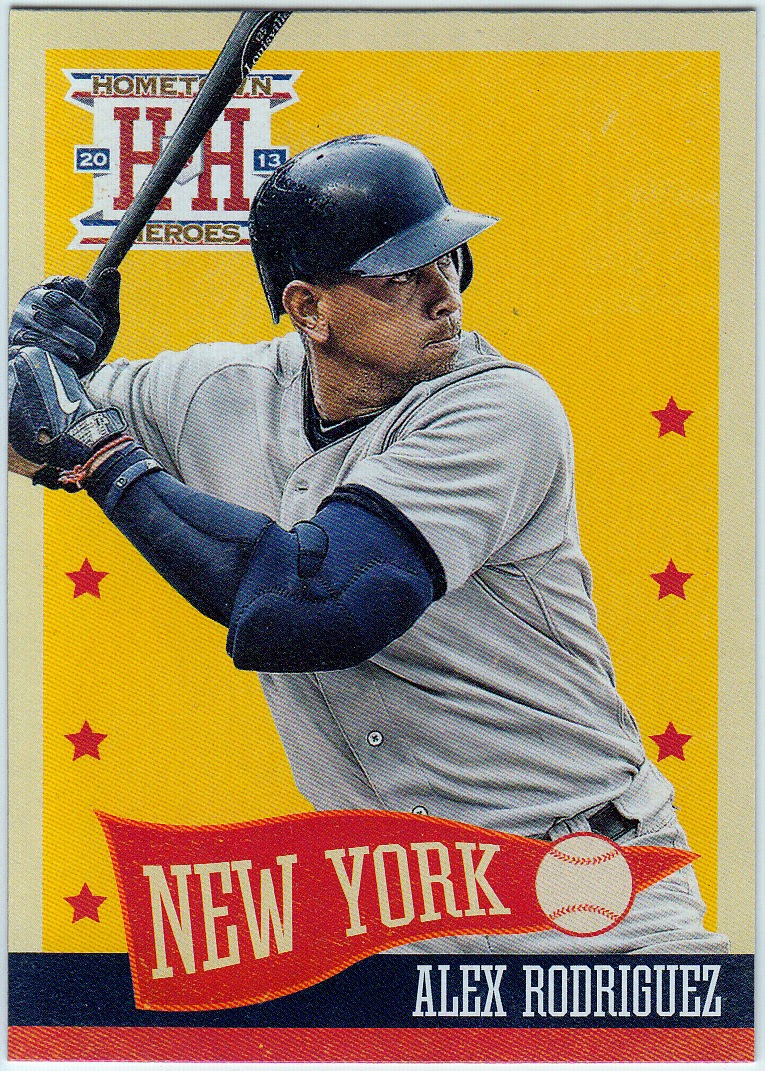 Oh, you really, really don't like A-Rod?  Good; more for me!  Did anyone watch 60 Minutes last Sunday?  I did, and I think it did more to fortify Rodriguez than hurt him.  Granted, I don't think Alex has been without sin, but the case against him is joke.

Anyhow...HEY...speaking of A-Rod, check this out: 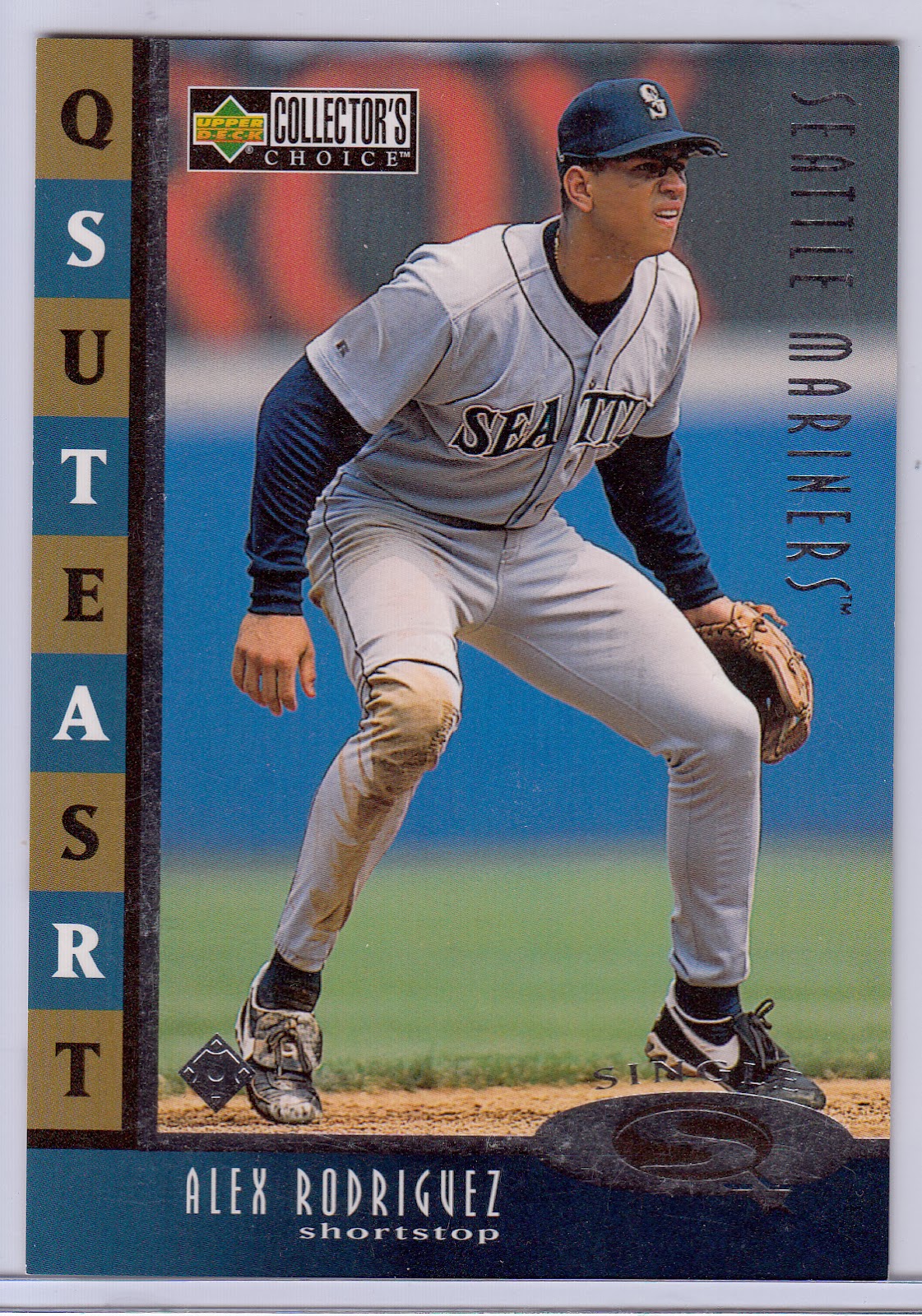 It's a super-huge A-Rod card!

What do you mean you can't tell?  Take my word for it: it's huuuuge! 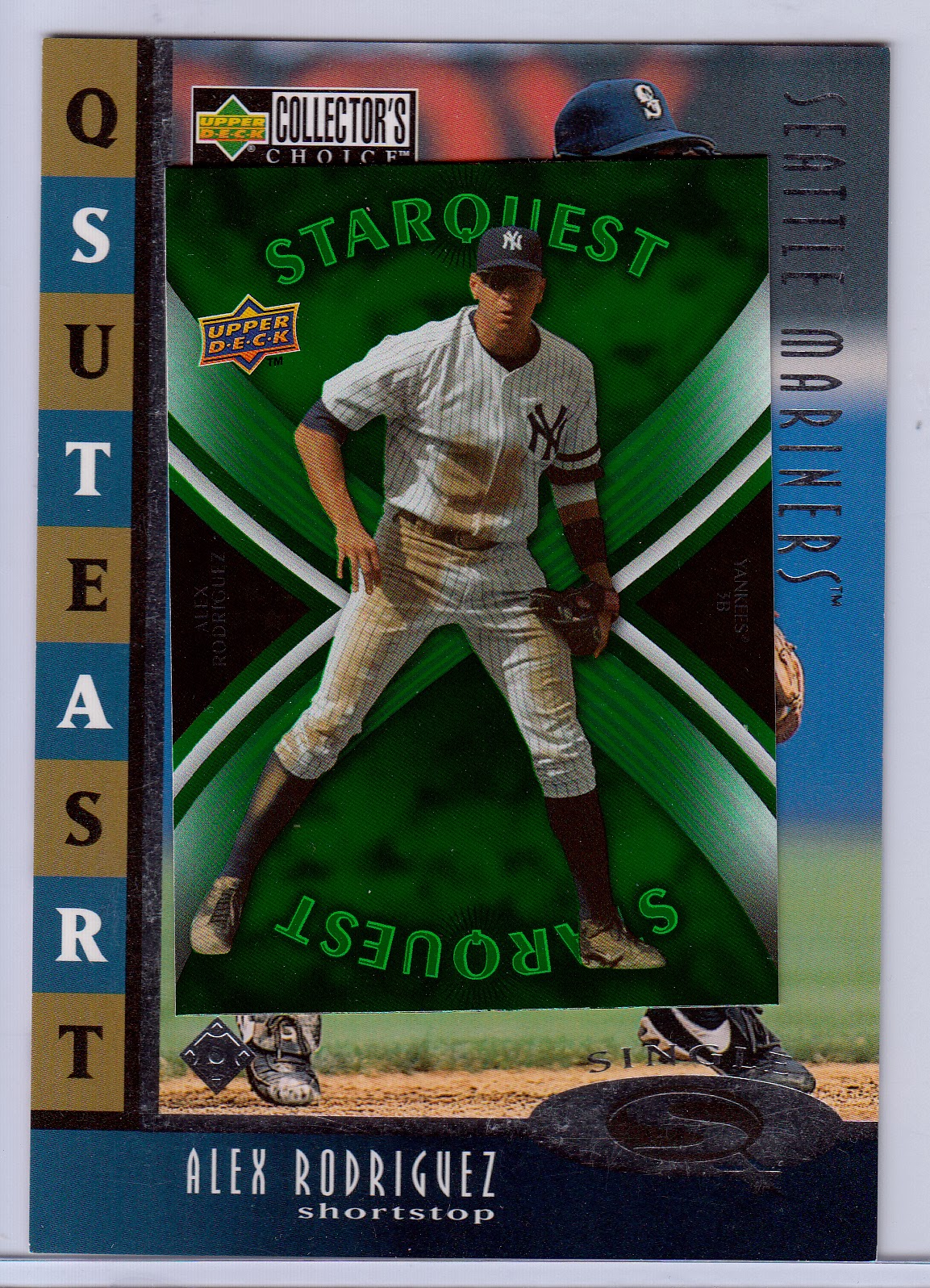 The green Starquest card is a standard sized trading card.

Not sure where this larger-than-life StarQuest A-Rod came from, but I'm glad it's in the safe haven of the Kaz household, shielded from the venom of the outside world.  Thankfully, Nick also placed it in a huge top loader, the kind probably reserved for photographs.  Otherwise, I wouldn't know how to properly protect this guy.

Last but not least, one of my newest favorites: 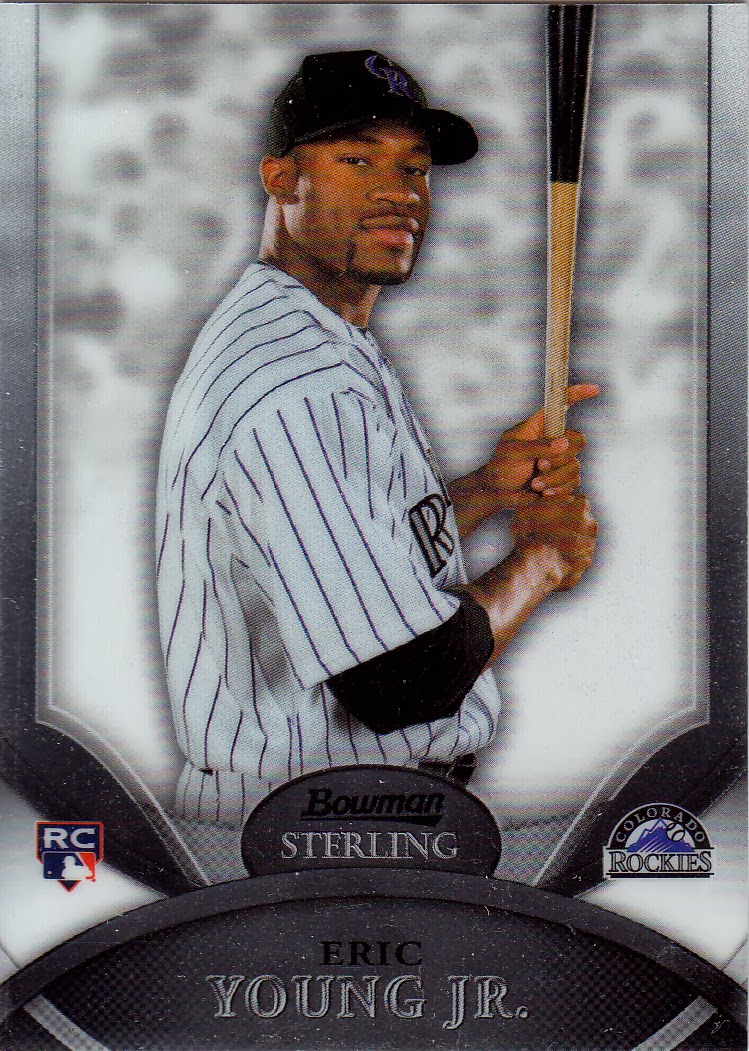 I sincerely hope EY stays in NY this coming season.  He filed for arbitration earlier this week.  I think he deserves a starting spot on the Amazins, whether that's playing LF or 2B.  He's got game-changing speed and a positive attitude that is contagious.  I'm not yet formally collecting his cards, but I'm just about there.  Snagging this attractive rookie card is a nice start.

Once again, thanks for coming to the rescue with a dime box home delivery, Nick!