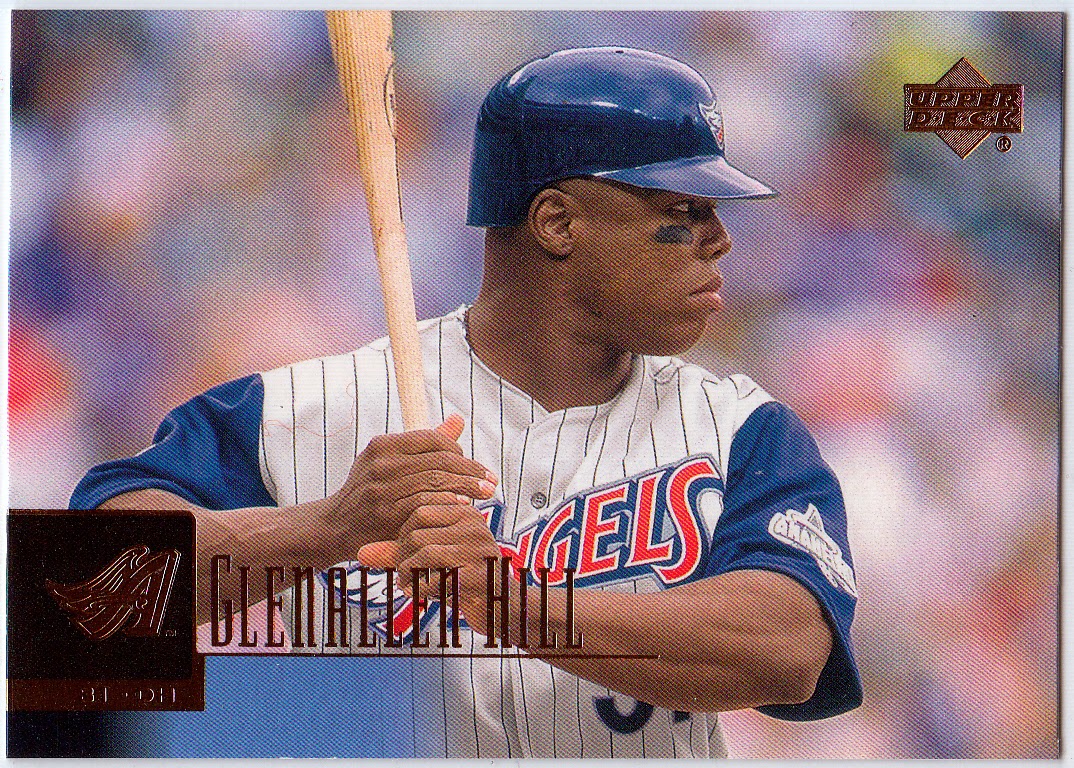 On we go with the 20-card sampling from my recent purchase of a 400 card repack from the local card shop.  In this second part, we'll see some cards of players wearing uniforms that look, well, wrong on them.  Okay, maybe "wrong" is the, uh, wrong word, but it just looks odd.

For instance, am I the only one who didn't know that Glenallen Hill played for the Angels?  Yet, here he is, wearing the cartoonish threads of the Los Angeles Angels of Anaheim California on this neat-o 2001 Upper Deck card.  Even though he played for a number of clubs during his accomplished career, I'll always associate the burly, no-nonsense Hill with the Cubs.  FYI, Anaheim was Hill's final stop before retirement; he played just 16 games for the Halos in 2001. 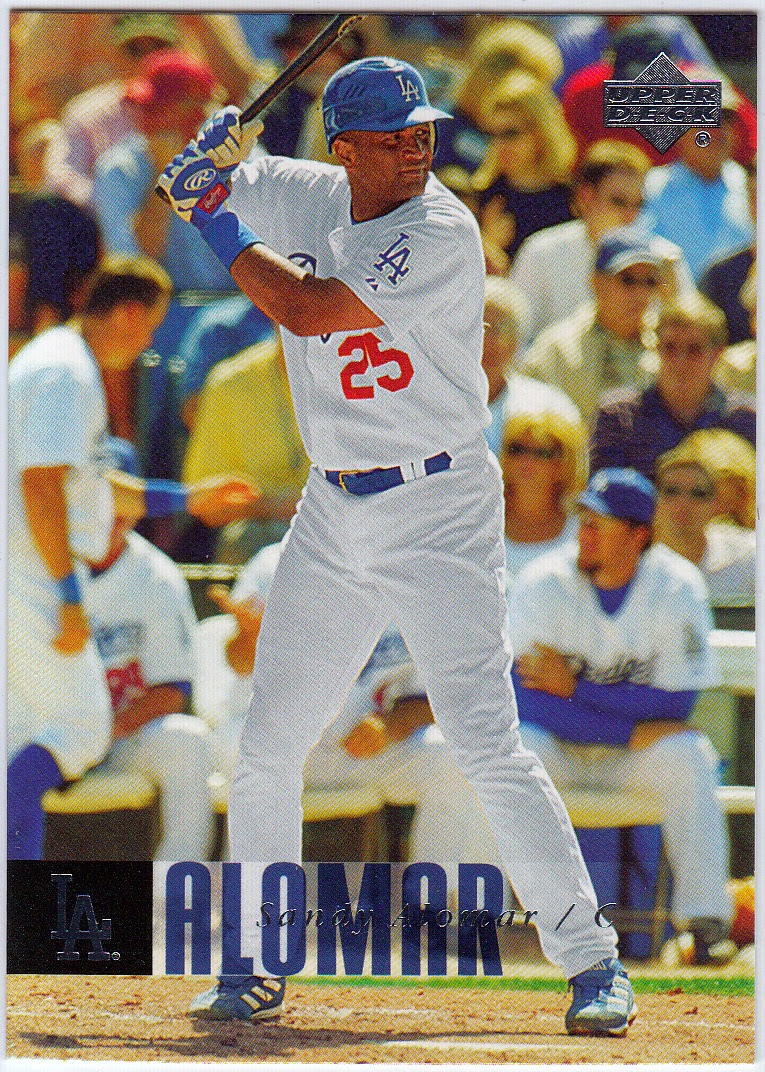 Sandy Alomar, Jr. is a guy I'll be adding to my Player Collections page in the very near future.  I can't say why for sure, but I just like accumulating cards of the guy.  That's why it was pretty cool to find this 2006 Upper Deck card of Sandy wearing Dodger blue.  When I first saw this card, I wrongly assumed that L.A. was Alomar's final stop.  But, he actually played eight games for the Mets in 2007.  You'd think I would recall that, but, well, I don't! 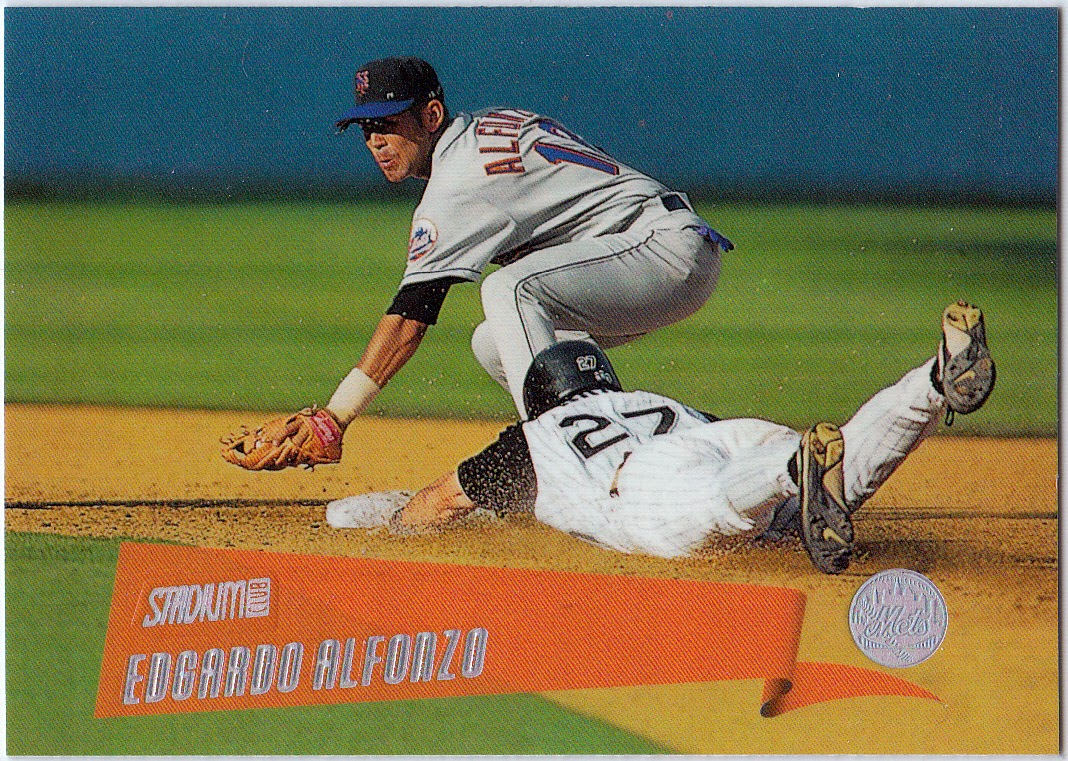 Since we're on the topic of the Mets, now would be an appropriate time to show this awesome 2000 Stadium Club card of Edgardo Alfonzo.  This one was in my JustCommons.com cart, which makes it a pretty nice coincidence that it found its way into my repack box. 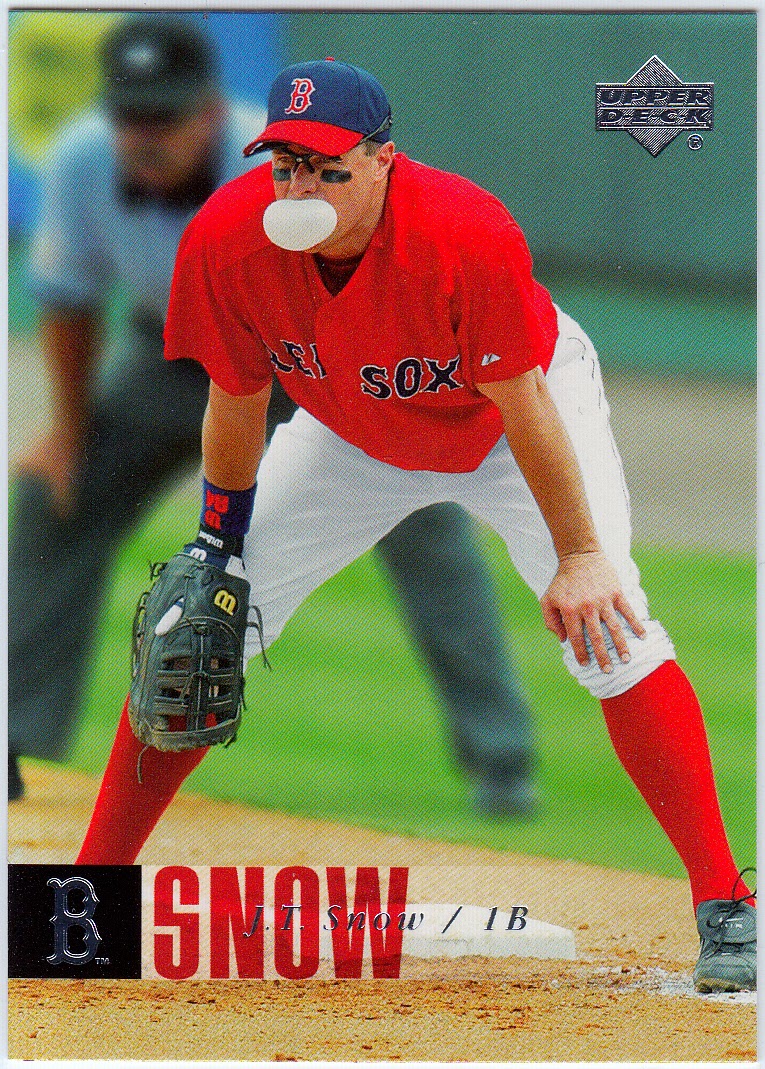 Okay, seriously?  I'm beginning to feel like a sports fraud with all these puzzling Upper Deck cards.  I like to think I follow baseball pretty closely, yet J.T. Snow playing for Boston isn't something committed to my memory. He played for the Sox in 2006 (the same year of this card) and batted .205 in just 38 games.  Oh well, I'll chalk it up to getting old, I suppose.  Anyhow, it's a pretty great addition to the J.T. Snow corner of my collection. Rick Monday is an American hero in my book.  Anybody who prevents the Star and Stripes from being burned is A-OK with me.  The two-time All-Star and World Series champ wound down his 19-year career with the Dodgers in 1984.  Thus, I have to believe this '84 Fleer is Monday's "sunset card," right Nick?? 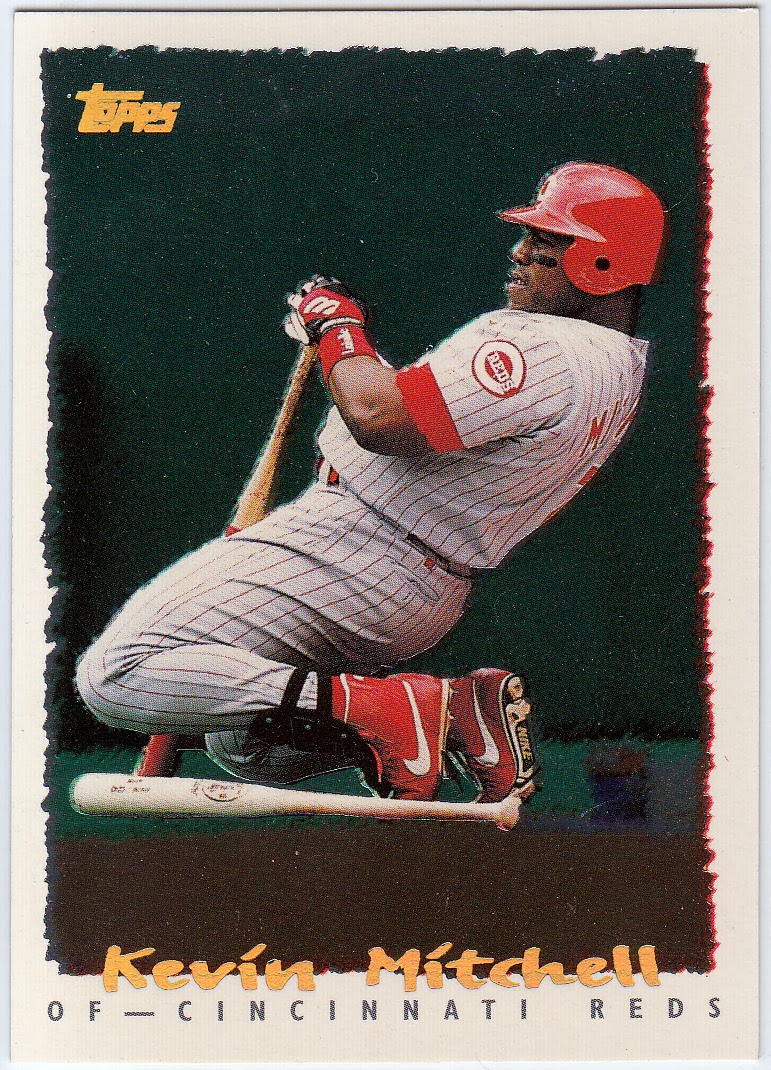 The CyberStats cards from 1995 Topps were one of the better parallel issues created by the hobby leaders.  Just my opinion, of course, but I'm starting to get a bit fatigued by the umpteen number of rainbow parallels.  Don't get me wrong, I love me some Wal-Mart blue and Target red, but I can do without the camo and pink, etc.  Oh, and in terms of this particular card, this is one of the most epic on-deck circle poses you'll ever see on card stock. And, since Kevin Mitchell won the NL MVP when I was nine, that forever makes him a viable player to collect. 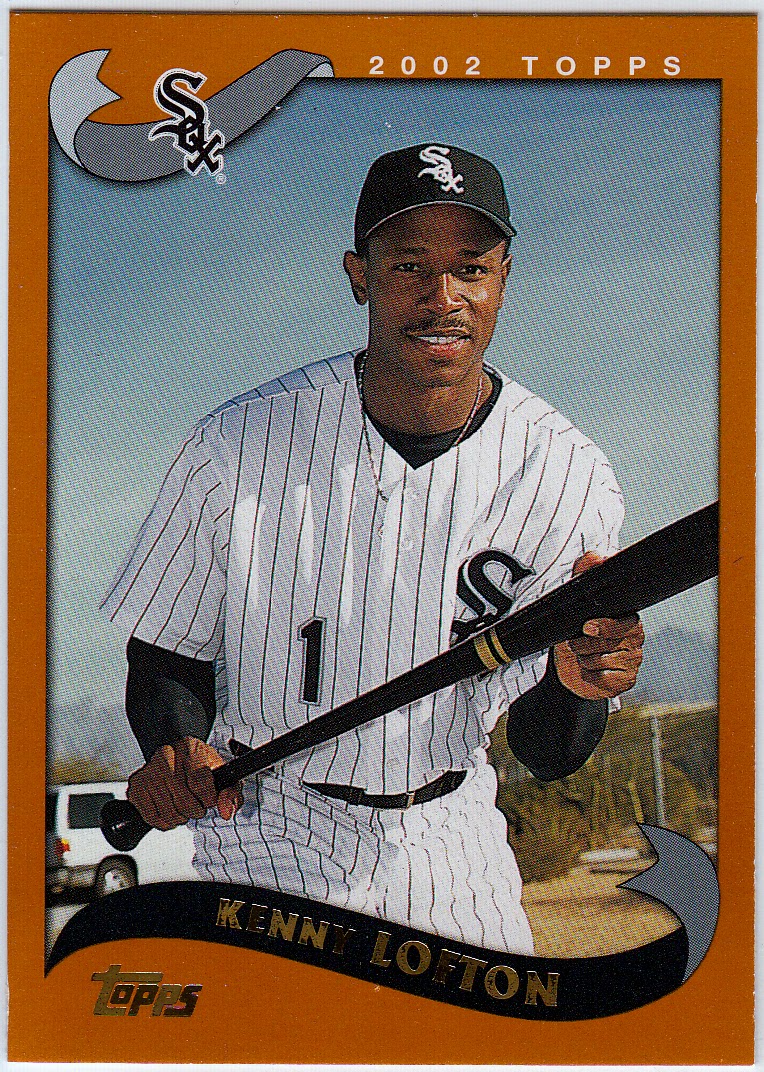 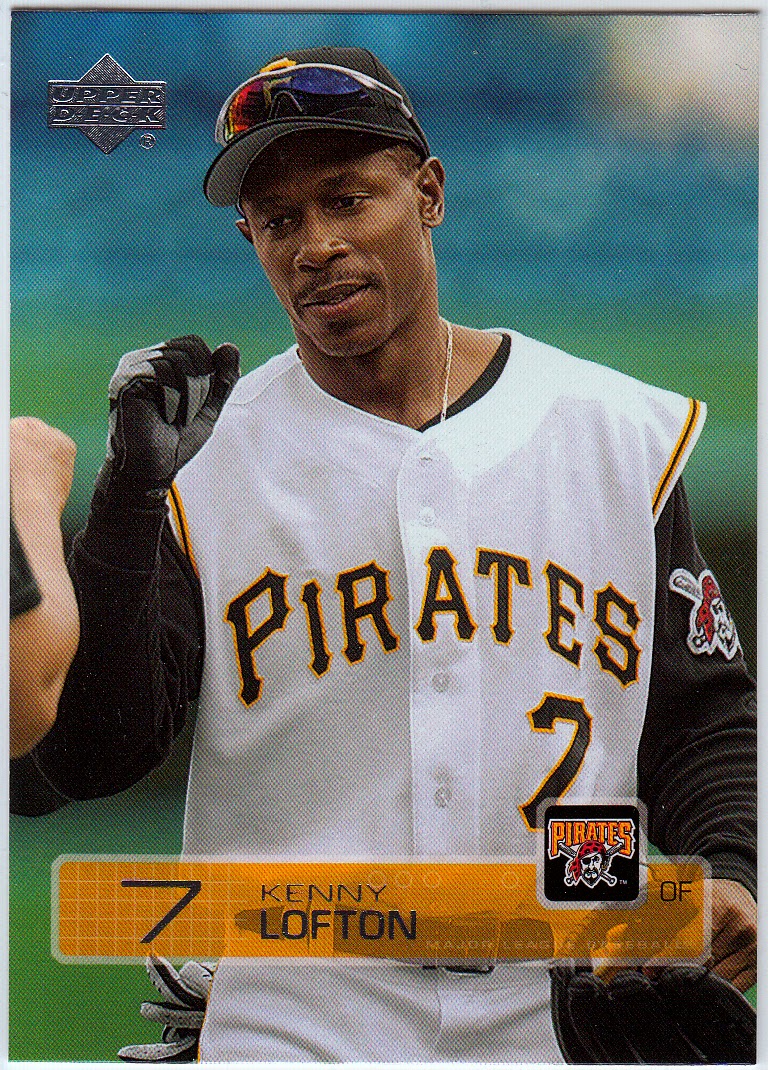 Consider these two Kenny Lofton cards as one entry, a 1A and 1B, if you will.  Yes, I know Lofton played on basically every team in baseball, but it still weirds me out to see him in such uniforms.  He'll always be an Indian in my mind.  I used to collect Lofton's cards with relative fervor, but I guess I stopped in the late '90s.  Looks like I have a lot of catching up to do! 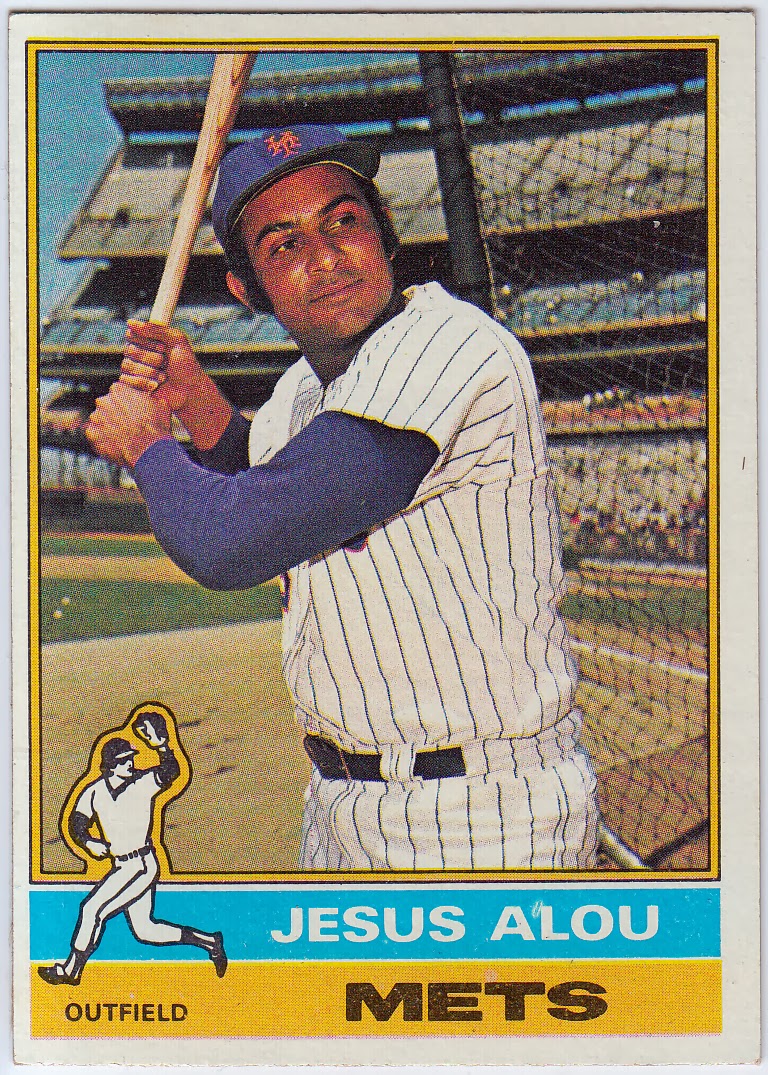 I think I this particular repack box was destined to for me.  How else can you explain the presence of a 1976 Topps Jesus Alou card?  I was hunting for this exact card on eBay not too long ago.  Another name from the All-Time Mets Project crossed off! 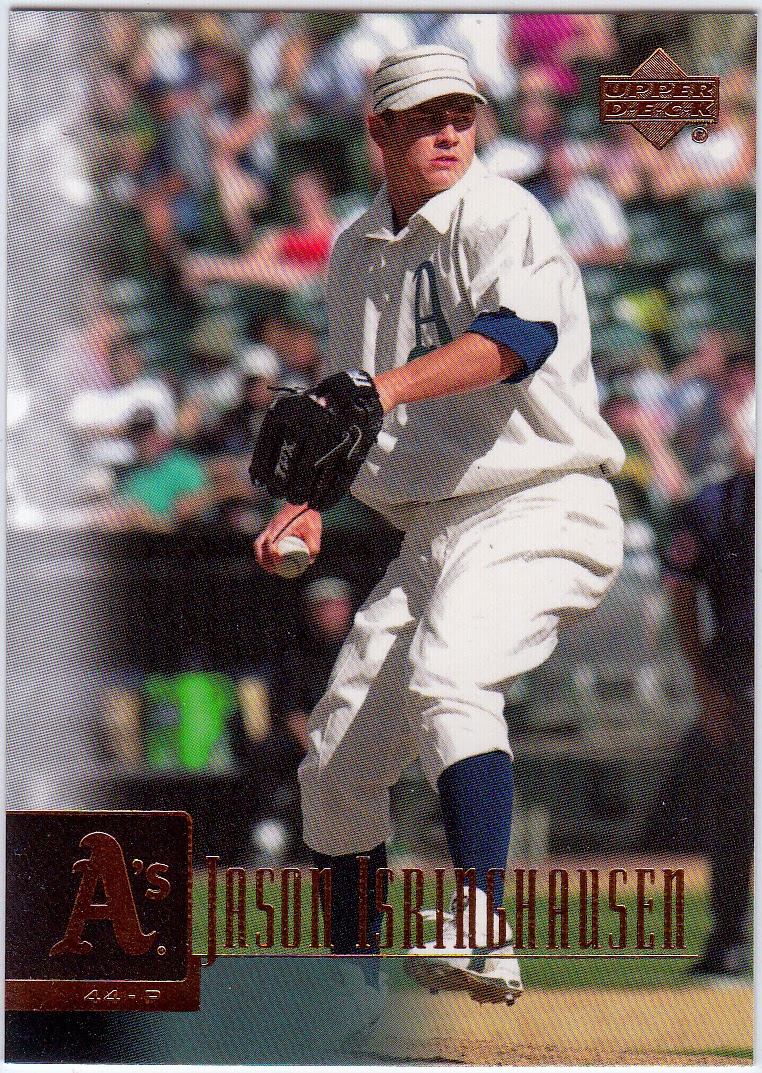 This is what a throwback uniform is supposed to look like, right down to the cap.  Jason Isringhausen wears the old Philadelphia A's threads well on this 2001 Upper Deck common.  Izzy was just coming into his own as a closer at this time.

And, we'll finish up with my guaranteed jersey or auto card: 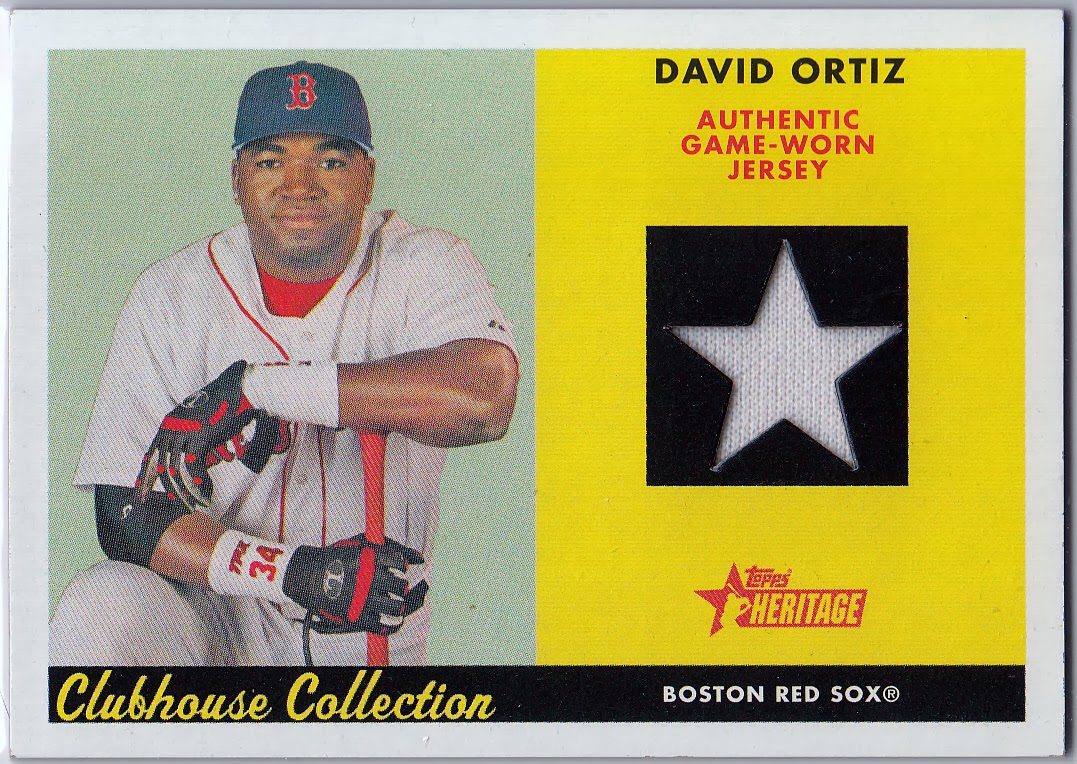 I'm pretty happy with this one: a David Ortiz Clubhouse Collection relic from 2007 Heritage.  This is definitely one of the best Clubhouse Collection designs, as they have been kinda hit or miss throughout the existence of the Heritage brand.  I could've done a lot worse than this as my "hit."

Thanks for taking a jog with me through a few of the highlights of the repack.  I think this is the third one I've purchased within the past year or so, and I've yet to be disappointed.  For five bucks, how can you go wrong?