[Ed.  Note: So this post is for the sole purpose of a contest I've decided to partake in on the blog Nachos Grande.  Basically, you get a random card and you have to write a post about it.  Over 30 bloggers are participating and the grand prize is a complete set of 2012 A&G.  So I figured, what the heck?  This is just a preliminary round, but feel free to vote for my entry when the game gets real!] 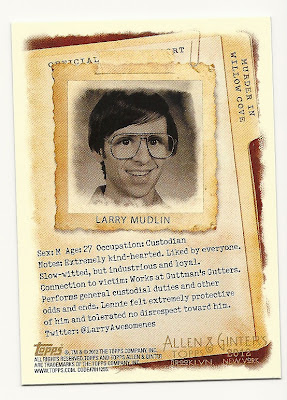 My first reaction to this card: Mr. Potato Head!

Aside from looking like one of the average physical stereotypes that one attaches to baseball card collectors over the age of 15, custodian Larry Mudlin bears a somewhat striking resemblance to the know-it-all computer dork, Melvin, from the 1983 cult hit War Games.  Maybe it's the glasses, I dunno.

In any event, I guess War Games and Allen & Ginter's code contest kind of share another common thread, albeit an abstract one.  In the movie, Matthew Broderick's character attempts to find the password to access secret computer games and, in the process, nearly triggers World War III.

And while A&G's promotional gimmick isn't going to inadvertently launch Soviet missiles at Seattle, fans of this code contest set forth to gather clues and information in an effort to crack the code and solve the mystery.  A buzzer rings and prizes ensue and the Twitterverse adores you for three minutes.

Not as glamorous as breaching the WOPR's operating systems to play "Theaterwide Biotoxic and Chemical Warfare," but to each his own.

Nah, I'll leave the case cracking to the experts.  I don't mean to get all cranky about it, really.  Perhaps I have the subconscious fear of winding up like poor Ralphie in the infamous Ovaltine scene from the holiday classic A Christmas Story.

"Dear Diary, after many months of wasteful spending and mental hardships that nearly destroyed my marriage,  I've finally cracked the Ginter Code.  Alas I am a broken man, for the knowledge I have gained may be summed up in the following, bitter words:  'Buy Topps Chrome on August 29!'"

Okay, maybe not.  But, it's still too much effort.  Part of the reason I love this hobby so much is it allows me a distraction from the many brain-cramping things in life.

Now, if you'll excuse me, there is a game of "Global Thermonuclear War" that has my name on it.