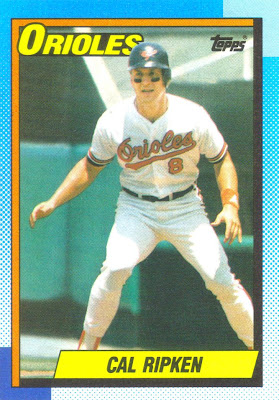 I was recently going through duplicates of my 1990 Topps collection to help a fellow blogger out with his '90 Topps set.  While I was doing so I remembered how much I really like this set.  And I'm not ashamed to admit it.

Thus I got the itch to bust out my 1990 Topps binder and relive this very colorful set.  Some say tacky or gaudy. And I can't completely blame anyone who might hold that view.  At first glance, your first reaction may be, "God, what were they thinking?!"

But, over time, I've really come to enjoy the cards and the design.  At the very least, Topps threw caution to the wind and decided to try something different and maybe even fashionable (for the '90s, anyhow).  Some of the color combos work, some should have been aborted upon first thought.  In my final estimation, I think this set works as a whole.

Okay, back to the binder.  I eventually came across the Cal Ripken card above, and it brought back a lot of memories.  Chief among them is the family trip we took to Baltimore's Inner Harbor during the summer of 1990.  I had never owned a complete Topps set and, after considerable lobbying, I convinced my dad to buy me the '90 Topps factory set from one of the novelty stores near the Harbor.

I can't tell you how many hours I spent going through all the cards in this set after I finally got them home and cracked open the factory-sealed box.  I'd organize the cards by team, and then I would line them up on the carpet in my room.  Sometimes I'd make a starting lineup and arrange them according to their defensive positions.  Obviously, some of the cards retain a "well loved" condition today, but that just serves to reinforce my memories.

Since I got the set in Baltimore where Cal's likeness was everywhere you went, Ripken's base card seems to stand out in my mind the most when I think of '90 Topps.  More so than the Frank Thomas draft pick card.  More than the Sosa or Juan Gonzalez rookies, too.  After all, Cal was kind of The Man back then.  He even had a Record Breakers card in this set, as he broke Ernie Banks' record for most consecutive 20 home run seasons by a shortstop during the '89 season.

I don't know, I guess if you had to choose a card to represent a complete set, you could do a whole lot worse than Cal Ripken.