I received a couple of fantastic trade packages in the mail on Wednesday, and I'm excited to share both of them with you.  One of them was from a fellow blogger, Tim at Home of the Toddfather, while the other was from Steve, a fellow Mets fan and, therefore, a good guy who is blog-less.

I will start with the latter, while I'll go inside the Toddfather's trade offering in my next post.

I guess it was last week that Steve emailed me to gauge my interest in a trade.  He mentioned that, while he did not have a blog, he was a reader of sports card blogs and wished to bestow upon me some assorted cards for my player collections, Mets collection, etc.

After bouncing back from the initial shock that someone other than the wonderful Mrs. K reads my blog [Ed. Note: ...and even she has fallen off lately, might I add], I said 'Heck Yes!' and we worked out a deal.

Steve sent me a bunch of great cards, but I have chosen just a few highlights to share.

I will start with the most oddball of oddball items.  Which, naturally, I greatly appreicate:

I believe this is from Tetley Tea iced tea mix, circa 1989.  Doc has that look about him that should signal to every man, woman and child: Run!!  Darryl, meanwhile, is sporting a pretty laid back 'Whatever dude' kind of expression.  Great oddball items that will look snazzy in my player collection.  I might even try to complete the Tetley Super Stars set via the send-in offer.  See, all you have to do is send four dollars and a SASE to....

Now that's more like it, a happy Doctor K!  Not that there was much to smile about in his personal life around this time, but sometimes it's good not to dwell on the TMZ angle of athletes' lives.  By the way, the good folks at Post wanted me to remind you that many of your favorite Post brand cereals, such as Fruity Pebbles and Honey-Comb, have essential vitamins and minerals that help you start your day off right!  [Ed. Note: If anyone from Post is reading this, I can be bought!]

Flanking Dwight are Gregg Jefferies and Jason Phillips.  Great action shot of Gregg from the '91 Stadium Club set -- a set that I need to add to my collection one of these days.

As for Phillips, the pose on this Fleer Ultra card pretty much sums up my fond memories of Jason Phillips.  I tell ya, this guy would've been right at home on the '62 Mets with the likes of Choo Choo Coleman and Marv Throneberry.  I mean, he was a pretty good receiver behind the plate but, man, he was as slow as a barge.  I don't think there's a player alive -- retired or otherwise -- who would lose a foot race to this guy.  Still, you couldn't help but love him, what with those great rec specs and his goofy personality.  Jason Phillips -- a true Met!

Jon Niese pitched a hell of a game in SF last night.  Three hits over seven innings.  If this guy can ever become consistent, he'll be a star.  This Goudey card is a pretty sweet-looking rookie of him, by the way.

Like a slouched-over Jason Phillips, Gary Sheffield in a jacket in the dugout is another lasting Mets image.  Sheff had a couple good moments with the Mets, including the April night in 2009 when he hit his 500th-career home run.  And as a pinch hitter, to boot!  Otherwise, Sheffield in a jacket in the dugout says it all about Gary's time in Queens.  I like this O-Pee-Chee set, by the way.  Plain design, but effective.

Next to Sheff, Carlos Beltran strikes a pose in the 2010 Topps 206 set.  Steve sent me a bunch of nice Beltrans for my collection, but this one was the most unique. 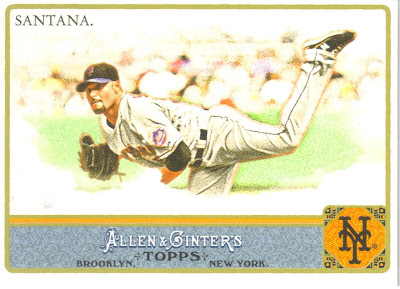 And I'll finish up with three great Topps Heritage cards for my 2011 and 2012 collecting quests, respectively:

Man, that Angel Pagan trade to San Fran last offseason didn't turn out too swell for the Mets, did it?  I didn't throw a fit when it happened, but I always liked Angel as a player.  Glad that he's had a pretty decent season for the Giants to this point.

The Kyle Seager card is an SP, which made me a very happy collector!

Thanks a million for reading the blog, Steve!  And, thanks also for a great trade -- hope to do it again someday soon.