Trade Recap: All Trade Bait, All the Time

Over the weekend I received a very cool trade package from Oscar (aka Stealing Home) of the great and mighty blog All Trade Bait, All the Time.

I'm still working my way through the 2012 sets, including Archives and Heritage, and Oscar was able to hook me up with some cards for each of those ventures.  One of the Heritage cards was even an SP (#428, Eric Thames), giving me a grand total of 20 of the 75 SPs.  That's, like, almost 27% man!

Additionally, Mr. Stealing Home included some terrific cards for a few of my player and/or team collections.

How about some highlights?  Here we go, in reverse timeline order... 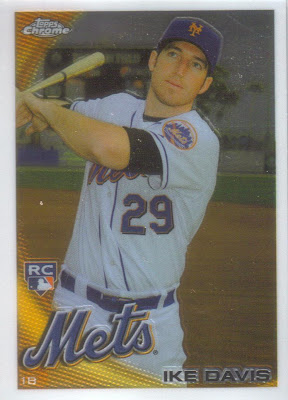 A good card to lead off with: 2010 Topps Chrome rookie of Ike Davis.  I love this card so much that I have a few copies of it already, including a couple refractors.  But, the more the merrier!  Great photo, and the 2010 base card design is one of my favorites.  By the way, Topps really enjoyed using the scoreboard of St. Lucie's Tradition Field for the backdrop of several Mets cards from their various 2010 and 2011 releases.  I'm not complaining, just making an observation.

The next card comes from 1996 Topps Gallery: 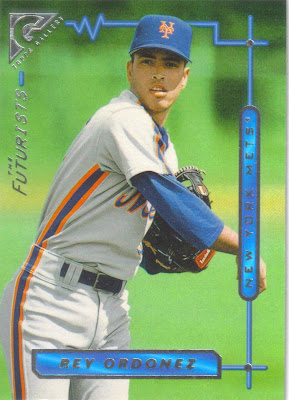 Rey Ordonez, from a subset called "The Futurists".  I don't know about you, but I'm diggin' the design.  So what, it's kinda got a schmaltzy Tron rip-off thing going on.  In 1996, you know you were drooling all over this set and cards like these!  Besides, Ordonez's defensive abilities were otherworldly, so a little Tron mixed into one of his cards makes perfect sense.  Or, as the back of this card reads, "He simply makes plays no one has ever seen before."

Let's dial it back a couple of years: 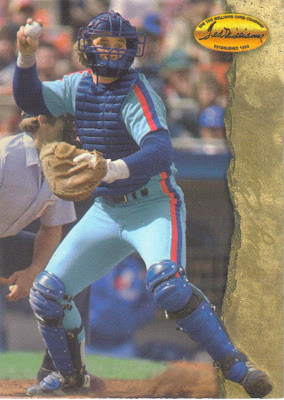 The Ted Williams Card Company, eh?  Yes, I do believe I have some of these, but certainly none of Gary Carter. This card is from the 1994 set, which is a couple years after Kid retired.  The picture they chose is outstanding: Powder blue Expos uni, full gear, ready to fire a strike down to second base.  Perfection.

From '94, we go back to 1992 now and some wonderful artwork from the Donruss people: 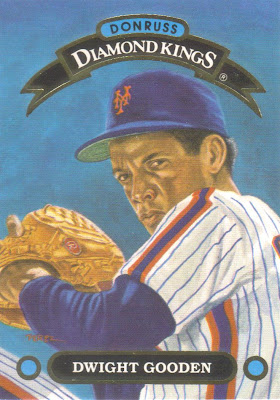 I think this might be my favorite rendition of Donruss' Diamond Kings set.  Nicely composed, solid artwork. Here, the attention to detail on Doc is pretty darn good. They have captured his focused scowl in mid windup. I'm very happy to add this to my Gooden collection.

Last, but certainly not least, we go waaaay back to 1976 for the final highlight of this fine trade package: 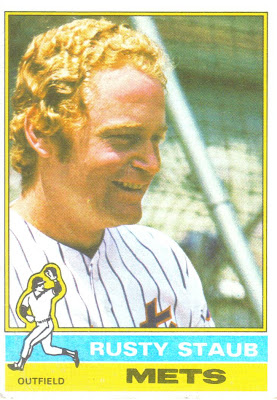 A pleasant surprise, to be sure!  I was just recently thinking that I'd like to seriously start collecting some of Rusty's cards.  I have a few, but not enough of this official Mets "Team Ambassador".  As for the card itself, it looks like Rusty is having a good laugh around the batting cage.  And why not?  Getting paid to play baseball is a wonderful thing.  Plus, us redheads are generally known for our good-natured jocularity.  So there.

Hey Oscar, great group of cards!  Thanks for an extremely worthwhile trade...