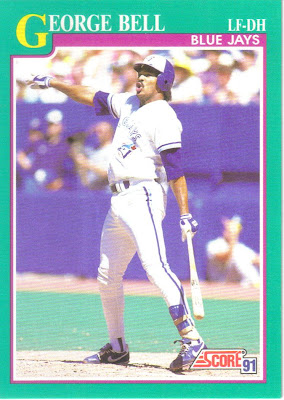 I know what you're thinking.

Furthermore, how's a guy who is obsessed with Topps products going to choose two cards from a manufacturer like Score to use as the focal points of a new feature?

Fair questions, both.  But, stay with me.

If you can get past the, uh, "unique" color of the border (what color is that anyway?), can you honestly tell me that this isn't an amazing photo of George Bell?  Can you think of any other George Bell cards that are as interesting as this?  Granted, many of us don't sit around thinking about George Bell, much less George Bell trading cards.  But, c'mon, look at this thing; it's simply awesome!

The roof was open at Skydome on this particular sun-splashed afternoon in Toronto, Ontario during the 1990 season.  That much we know.  But, the real caper revolves around the pointing and yelling.  Who or what is Bell yelling at?  And the pointing, what?

When I was 11 and I first saw this card I breezily surmised that one of two things was true: A.) Bell was letting everyone in the park know where he was going to send the next pitch, a la Babe Ruth, or B.) he was sassing the umpire about a missed call.  I'm thinking some cringe-worthy "yo mama" material was used.

I guess either one of those hypotheses could be true.  More likely, though, the 32-year-old Me thinks maybe he's directing base runners in the aftermath of a wild pitch or passed ball.

Regardless of what George Bell is doing, or how fat he thinks the umpire's mama is, I love this card.  And, if you think about it, 1991 saw a lot of tremendous photography in card sets from the likes of Score, Topps and Upper Deck.  This might not be the ultimate example, but it's one that has remained emblazoned in my mind.

What I Learned from the Back of this Card:  In 142 games for the Jays in 1990, Bell clubbed 21 homers and drove in 86 RBIs, picking up his second All-Star Game appointment in the process.  Per former teammate Lloyd Moseby, "He's the ultimate baseball warrior.  If he's on your side, you love him.  You hate him if he's on the other side."  Awesome.

Maybe I was right about the mama jokes after all...