Right or wrong, I get the feeling some collectors contract great amounts of joy from dumping on a lot of Topps' efforts from the late '90s and early '00s.

Namely, I've seen the Stadium Club brand getting flogged in more than a few places throughout the blog world. Perhaps not recently, but in my many search engine jaunts throughout recent time, I've stumbled upon gobs of pretty vicious prose aimed at TSC.

And my question is:  Why?

Other than severely overpricing the packs like every other manufacturer of the time, what exactly did Stadium Club do to merit such exaggerated hatred?

To my eyes, even to this day, I've never seen better photography in a baseball card set than I've seen in Stadium Club sets.  Obviously, this is my opinion and you're free to contradict it.  But, if they're not at the top of the list in terms of brilliant and creative photography, they're close enough to spit on it. 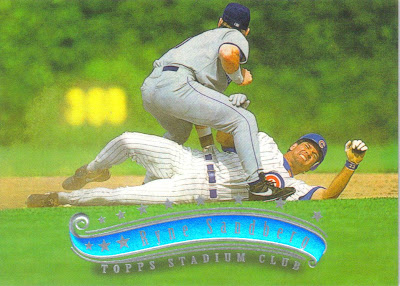 Additionally, I don't recall any Stadium Club sets being complete eyesores, do you?  There are no Tron-like graphics (on the card fronts, anyhow) or borders, no clutter or visual mayhem bombarding your senses.  Nothing as embarrassing as sets that other card makers put out during the same period.  Not even close.

Okay, maybe Topps went a little overboard in terms of their fascination with embossed images or graphics.  And, sure, the cards are so over-glossed that they begin to curl into the letter 'U' as soon as you take them out of the pack or box.  Are you going to send them to guillotine for that?

Well, if the world hates Topps Stadium Club, then stop the globe and let me off!  I unabashedly love the stuff and am still collecting it to this day.

As a matter of fact, I recently won an online auction that consisted of a starter set of 1997 Stadium Club, which is absolutely my all-time favorite Stadium Club design.  And, boy was I happy! 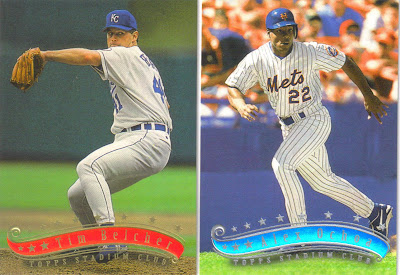 Granted, the winning lot consisted of mostly common players (see above) and semi-stars, as most of the star players had been stripped away from what originally had been a complete Members Only set.  But, that's no biggie, since I didn't break the bank.  Plus, I view every card in the set as a visual masterpiece.  The fancy ribbons at the bottom of the cards with the players name are...ahem...embossed, and very striking visually.  Blue for the NL players, red for the AL guys.  They are a perfect compliment to the ace photography.  I will happily visit COMC or a similar site and purchase the additional 100 or so cards I need to complete this set.  And then it will go straight into a binder for future enjoyment.


Maybe some day Topps will resurrect the Stadium Club brand.  Probably not any time soon, since they already have a billion different sets to sell us.  In the meantime, I'll just enjoy those past issues of TSC that I never got around to collecting, like the '97 set.

Oh, and if anyone has any tips on how to keep those super-glossy cards from curling, I'm all ears...