Trade with Coot Veal and the Vealtones

As promised, here is my recap of my trade with Dustin, the founder and CEO of the fantastic Coot Veal and Vealtones blog.  Dustin emailed me a little while back about the 2012 Topps manu-patches of Sparky Anderson and Al Kaline I had posted on my trade page.  Thank goodness, a Tigers fan to take those things off my hands!

From his trade bait page, I was able to find a pair of relic/game-used cards that I liked, and here they are: 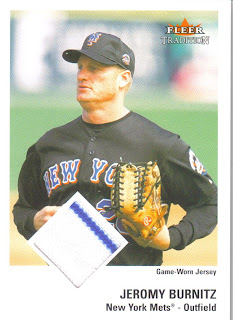 Yes, that is Jeromy Burnitz.  How could I take a pass on a Burnitz jersey card?  I mean, not only did he fail once as a Met, but he came back for second helpings of failure after he actually carved out a nice little career for himself in Milwaukee.  But, that’s a bit harsh.  I like Burnitz and I proudly collect his cards. 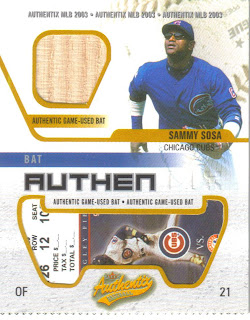 The Sosa is a bit more conventional of a card choice, perhaps?  This is an awesome-looking relic card from the 2003 Fleer Authentix collection.  It’s unique not only in appearance, but it’s slightly shorter than a normal card, I guess to emulate a ticket stub?  Got me, but it’s a great piece for my Sammy collection.

But, the trade package doesn’t stop here.  Nay, it’s just beginning!  During our email exchanges, Dustin mentioned he was pulling some cards for my player collections, but I didn’t figure he’d go as bonkers as he did.

The package I received from Dustin was stuffed with four additional team bags of cards – all cards of guys I collect.  He really did a thorough job of going through my player checklists and finding all sorts of goodies that I don’t have.  I most certainly appreciate that sort of effort!

I picked just some of the highlights, not doing justice to the volume of cards I received.  I think my scanner would start to smoke and spit if I tried scanning everything.

But let’s check out some of the loot:

Great place to start, right here.  Some of my favorite Mets from the past couple decades: Rey Ordonez, Carlos Beltran and the incomparable Pedro Martinez.  Ordonez is a guy that I’d really like to collect as many different cards as possible.  I still haven’t seen anyone play a better shortstop in baseball since Rey manned the post for the Amazins in the late ‘90s .  The Beltran is a sweet gold parallel from Ultra, while Pedro tries to get on the same page as his catcher in this Stadium Club gem.

The Bowman Jeff Kent is an awesome card with the diamond graphic etched into the background.   I love getting Keith Hernandez cards in general, but one from his final year in baseball is truly a treat.  It’s still weird to think about him in an Indians uniform, but there he is.  Even on a 1991 Fleer card, Keith is a smooth dude.  And speaking of ’91 Fleer, this is a Pro-Visions card of Darryl Strawberry.  I have the Gooden from this same insert set, so I’m happy to have the Straw now.  Call me crazy, but I like these.  They make Diamond Kings look like pre-school drawings.

Yes, the cards of Robin Ventura and Carlos Baerga are great, but I’d be lying if I said the Kevin Maas “Hot Rookie” card isn’t my favorite card here.  Shoot man, kids were probably getting jumped and/or beaten up for this card back in 1991.  Great addition to my Maas collection.  Love it!

What can I say, this was a tremendous trade package.  Trust me when I tell you that were plenty more cards.  I had a blast flipping through them all and I’m anxious to update all my player lists.  If you are a player collector who is all over the map in terms of who he/she likes to collect, Dustin is a great person to trade with.

Thanks a million, Dustin!  Your return trade package is on its way…