I hadn't previously opened a pack of these before, though I have a few cards from this series that I found in dime boxes over the years.  I kinda like these; the photos are solid and, as is the case with Fleer cards from this period, the back of the card features copious statistics and tidbits about the player.  Of all the cards I got in this pack, Yount is the only player I collect.  Still, a pretty cool pack!

A Donruss design that I don't necessarily mind right here.  Not anything within this pack that would make me do cartwheels, but the George Brett "Diamond King" is a good hit which will make a nice addition to my Brett collection.  Also, I glanced at the back of the Don Baylor card and was kinda shocked to find that he hit 31 home runs for the Sox during the 1986 season.  Not too shabby for a guy in his 15th season!

A pretty standard assortment of cards from the '88 Topps series.  By the way, I never noticed this before, but on one of the inside folds of the pack is printed, "Be a Superstar, Say No To Drugs."  Thank you, Mr. Reagan.  Anyhow, the Tom Kelly has a serious gum stain on the back, but overall the cards are in pretty decent condition all things considered.  Mookie, Pudge and Trammell are all players I collect, though I already own these cards (as well as the rest of the set).  Still, opening this pack was a pleasure, considering my blog's title was born/borrowed from the backs of these cards.  Mookie's This Way to the Clubhouse info line tells us that "Mookie was signed as a 2nd round Draft selection with the New York Mets, 6-23-77 by Scout Wayne Britton."

Not exactly sure what Topps was shooting for with this release.  Here we have a pack of Big Baseball from the 2nd of a three-series set that includes 264 cards.  Yes, they are slightly bigger than the normal issue, which is just enough to annoy any collector.  At least with their "League Leaders" or "UK" releases, the cards were smaller and you could still put them in normal-sized binder pages or penny sleeves.  But, what are you supposed to do with these?  Needless to say, I never purchased or opened a pack of these before.  I will say that the design is kinda neat, and you get a big, colorful tri-panel cartoon on the back.  They even give you the first-middle-last name treatment on the back, a la Donruss.  Of course, the pack I opened isn't exactly a blazer.  Still, it is a Topps product and therefore qualifies as something that I will keep on my radar for future set-building consideration.

I may be in the minority on this one, but I really like this card design.  It's so gaudy it's great!  I don't own too many '88 Fleer, but I'm toying with the idea of working on a complete set some day.  As for this pack, I got a pretty good hit with the Nolan Ryan, and the Ozzie is nothing to sneeze at either.  And what would a pack of cards from the '80s be without one of the Perez brothers?

First thing right off the bat: Will Clark!!!  Now then:  This is the first of the packs that wasn't a wax pack per se, as Score went with soft plastic package for their product.  On the front of the pack, we're told that these cards are of "Photo Quality".  For 1988, I will give them that feather in their cap, as these cards were of a much more rigid card stock and were more like photos than any of the other companies.  But, the series of different colored borders just doesn't do it for me.  Pick a color and stick with it, please!  Oh, and how about 17 cards per pack?  In today's card collecting lexicon, that would qualify as a "jumbo" pack.  [Ed. Note: Pffffffffft!]  Packwise, decent assortment from their 660-card set.  Obviously the Clark is a nice prize, but getting a couple of subset cards is neat, too.  I've chosen to highlight the Gant card instead of the Puckett because I've transported myself back to being eight years old.  And any card that had "Rookie Prospect" printed on it was greater than gold in them days!

As alluded to in Part 1 of this post, 1988 Donruss is perhaps the mugliest of all baseball card designs since the inception of the hobby.  Were they going for the abstract art thing?  Who knows, but it's a complete eye sore.  Regardless, this was a pretty fun pack!  Lots of good players from that era, including Cal Ripken (a card I do not own!) and Ron Guidry.  You've got a baby-faced Jamie Moyer and even a Diamond King of Benito Santiago.  Oh, I also got a chuckle out of the Nelson Liriano DK.  I worked as a broadcast/media relations assistant for the Wilmington Blue Rocks (Single-A affiliate of the Royals) in 2007 and 2008, when Nellie was the batting coach.  I have a few good stories pertaining to him, and maybe I'll share them on here some day.  By the way, I got a straight run from card No. 169 through 180.  I never bought Donruss packs as a kid, is that normal??

Wow, not the most sparkling pack.  Kind of a bummer from a Topps edition that is my all-time favorite.  Luckily , I already compiled the complete '89 set and have oodles of extras.  I was hoping for find a Gregg Jefferies or a Mark Grace or a Howard Johnson.  But, I will settle for Joe Carter and a Mike Harkey "Future Star" I suppose.  Two "Leaders" cards and a manager card is kind of buzzkill, though.  Oh well, it doesn't change the fact that 1989 Topps is my A-1 favorite set of all time.

My Uncle Rick bought me the '89 Fleer factory set for Christmas that year, so I have all of these cards.  But, the opportunity to snag another Griffey Jr. rookie or a Randy Johnson, Gary Sheffield or Craig Biggio is always exciting.  No such luck on any of those fronts, but this was a pretty decent assortment of players, especially Joyner and McGriff.  A couple of good hurlers in this mix, also, with Wells and Drabek.  Plus, the Mets sticker is a welcome addition!  Again, I might be one of the few who actually enjoys this particular design.  I'll take 'em over Donruss any day!

Well, I've done my share of ragging on Donruss, and the '89 set surely isn't among my favorite designs either, but this is a pretty good pack!  My second card of the pack break for each Fisk and Gant.  I finally got another Met, also -- Big Mac.  The Sandberg, Van Slyke and Martinez cards are nice additions to my player collections.  I never understood the puzzle thing that Donruss always featured.  Maybe there are/were some collectors out there who looked forward to those? 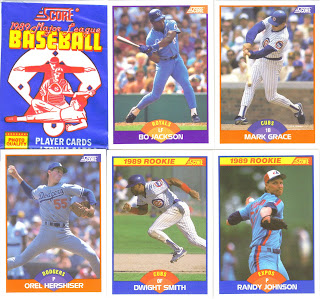 Wow!  What the '89 Topps pack lacked, these two more than made up for!  One of two "doubles" I got in terms of the 25-pack assortment was 1989 Score.  Prior to opening the packs, I was A-OK with that because '89 Score is by far my favorite of all the Score releases from that period.  Heck, it's among my favorite for any company's releases from that period.  In these two packs, I got some personal favorites as well as some real star power.  At the top of the list is obviously the Randy Johnson rookie.  Since Score once again used plastic packaging, it wasn't possible for unethical store owners or dealers to search the packs and reseal them, as with wax packs.  Thus, landing a rookie of the Big Unit was a true possibility (though I still kept hope alive with the Topps, Fleer and Donruss packs).  The Bo Jackson was a card I had when I was nine, but I handled it so much back in those days (cos it's an awesome card!), it took a beating.  But, now I have a nice new one!  The Grace and Hershiser cards are no-brainers, while the Dwight Smith is such a great action photo that I had to include it in the scan.  If Smith's on-field talents matched my love for that card, he'd be on a Hall of Fame ballot.  This is another one of those sets that I may try to complete some day.

Okay, that does it for the 1980's packs.  I netted some good cards for my player collections and even got one of the premier rookie cards of that era with the '89 Score Randy Johnson.  Moreover, I had a blast ripping into them.  My next post will be the results of the 1990's packs.  See ya then!