Going Through My Player Collections

Thanks to a much-needed long holiday weekend, I had lots of time to go through my 5,000-count boxes which house my player collections.  Partially because I am trying to upload as many of my player collection lists to the blog (see the "My Player Collections" tab above if you are so inclined), but also because it's been way too long.

See, I have a bad habit of acquiring a bunch of cool cards from shows or packs, storing them in the appropriate section in the appropriate box, and then neglecting them for weeks at a time.  Rather than keeping the player collections in binders, each card gets the penny sleeve treatment and then it's into the box.  I can't say for sure if I would give these cards more love and attention if I did house them in binders.  I mean, after all, I have my 1994 Topps set in a binder and I can't tell you the last time I gave that a look.

Anyhow, plenty of weekend leisure time afforded me the enjoyable chore of admiring each card and plugging its info into a Google spreadsheet.  This went in perfect tandem with marathon of The Walking Dead that AMC aired over the weekend.  Every so often, between logging Mike Piazza cards, I would look up and see horrific glimpses of the zombie apocalypse unfolding on the TV.

I know, what a great weekend, right?!

The only good thing about leaving my player collections fallow for as long as I do is the ability to rediscover cards that I absolutely love.  At one time, they were the primary object(s) of my hobby affection, only to become one of many; a statistic, if you will.  [Ed. Note: Cue the violin music]

But, the thrill returns quickly enough when you come across that rookie card with nice centering and sharp corners.  Or the card from such-and-such base set with the amazing photography.  Or the bad-ass insert that you either were lucky enough to rip from a pack or stumble across in a dime/discount box.


Of the latter I found plenty.  So, I figured I would share a quick six with you.

I won't rehash my diatribe about how Topps has ruined the idea of "insert" cards.  And how inserts mostly exist as vehicles for swatches or autographs or slivers of wood.  But, looking at some of these makes me wish we could turn back the clock to inserts of this caliber: 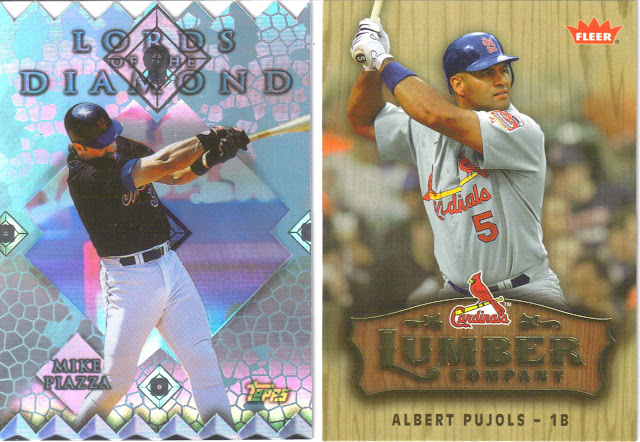 Notice how the Piazza "Lords of the Diamond" card doesn't have a huge, vacuous area where a relic piece would go.  Heck no!  This is an insert, dammit, and Topps (back then) wanted to impress you with a shimmering, glossy coat; fancy die cut technology; and an action photo that was original (read: not used in four other subsets).   Fleer was always at the vanguard of inserts in my opinion, and I always enjoyed their entries through the years.  Whether they were from the base set, Ultra or any of the gazillion other brands they dreamed up before going belly up, Fleer inserts were mostly solid.  The above Pujols card isn't breaking barriers, but it's a damn good-looking insert and a nice part of my collection. 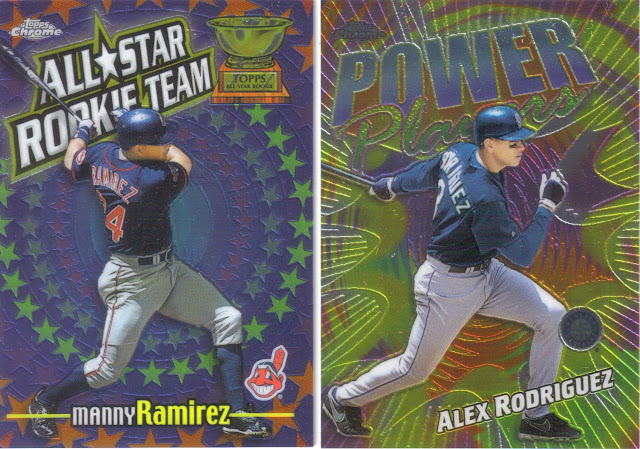 Boy did I love this era of Topps and Topps Chrome inserts.  Can you beat the late-90's, early-00's inserts you'd find in a Topps Chrome pack?  Of course, I never bought Topps Chrome packs in those days and, even if I did, I wouldn't ever find any cool cards like the two above.  But, coming across them in discount boxes was just as fun and rewarding.  Colorful, shiny, glossy, sparkly, and even gaudy.  Can't get enough! 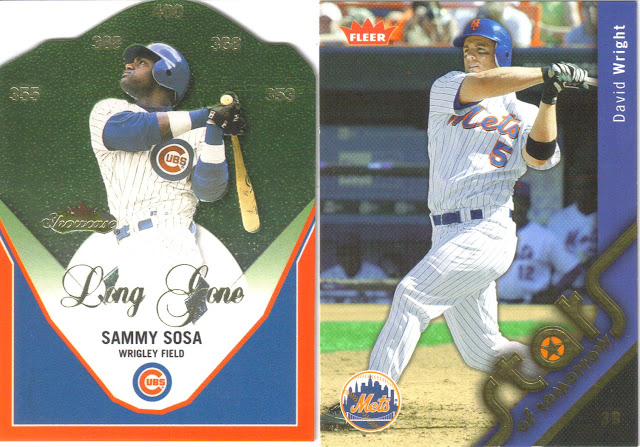 I'm a big fan of this Sosa card on a number of levels.  Primarily for the very cool die-cutting job, which depicts the outfield dimensions of Wrigley Field.  Say and think what you will about Sammy in a negative sense -- and I was guilty of it, too -- but the guy was an awesome ball player and really gave the fans tons of thrills over the years.  And you can't put all of that on illegal substances, I'm sorry.  As for David "I Should be Starting on Tuesday" Wright, I just really like the photo they chose, and how the design kinda reminds me of those early-90's Fleer inserts.  Again, nothing earth-shattering, but just a clean, attractive card.

There are still some good insert sets out there, fitting the mold of the 'classic' insert style.  Those that spring to mind are are the Series 2 "A Cut Above" that Topps has given us, as well as Opening Day's "Fantasy Squad" and "Opening Day Stars".  There needs to be more of these and less of the 'other kind'.

Thanks for taking the time to stop by and read my rambling.  I still have a ways to go in terms of listing my player collections, so I'm sure I'll be sharing a few other favorites in upcoming posts.

Til then, take care and happy collecting!
Posted by Mark Kaz at 11:00 AM