One of the main reasons I started this blog (aside from blabbing about cards and such) was to be able to make trades with fellow collectors.  And lo and behold, not even two weeks after the birth of this blog, I have completed my first trade.  It is only fair that my seminal trade was with Marcus, the man behind the keyboard at All the Way to the Backstop, as his blog was chief among the many that inspired me to finally throw my hat into the ring.

Rather than be too wordy in the set up (a real problem of mine, I admit), I will just fast forward to the good stuff -- of which there was plenty!  Where to begin...? 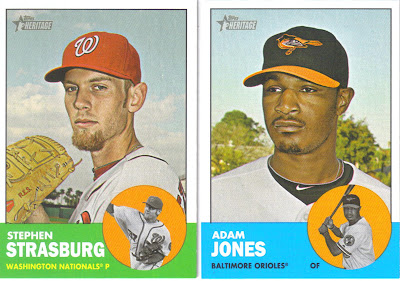 How about with some sweet base cards from 2012 Heritage!  He flipped me a bundle of great cards from this product (including an SP!), inching me closer to completion of the base set.  Still a ways to go, but this was a huge help.  I went with a Beltway theme for the above scan, plus I'm a fan of both guys.  Mrs. K (a big Birds fan) and I went to the middle game of the Nats/O's series at Camden Yards a couple weeks back.  Naturally, it was the only game of the series the Orioles lost.  Still, it was a great time.  And getting to watch Jones patrol CF is always a treat.  We even got an up-close seat as Strasburg shagged flies during BP.  I guess that's some consolation for not getting to witness him pitch, right?  ....Right? 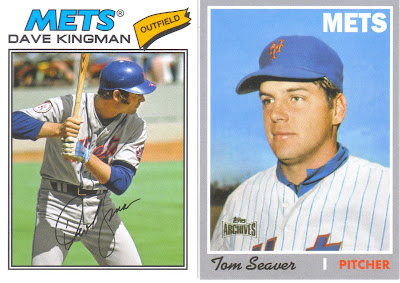 We move from one 2012 set to another that I'm currently working on.  As he did with Heritage, Marcus spoiled me with oodles of great Archives cards.  And as a cherry on top, the above SP of Kingman plus a Seaver reprint.  I'm lovin' both of these!  I doubt that I'm going to go chasing too many of the Archives reprints, but the Seaver is most definitely a keeper.

If he would've stopped at that point, I would have considered myself very satisfied with this trade.  After all, I was primarily hunting cards for the aforementioned sets.  But, the generosity of the hobby blogosphere showed itself in a big way, as Marcus included a bunch of cool cards to put towards my player collections.  I picked some of the highlights to showcase, including the above Alomar, Alou and Glavine cards.  I can't say that I've seen many (any?) Mets cards featuring the jersey that Glavine is wearing.  Very cool!  And, what's not to admire about Sandy Alomar?  As a kid who played catcher practically ever year of rec ball, I really have a high appreciation for guys who play the position well.  And he was one of the best.  As for Moises, he was a great hitter.  Too bad he could never stay on the field for too long.  Great photo they used in the above card.

And some more!  I don't think I have any Gypsy Queen cards in my collection, so this Doc Gooden card is a real nice addition.  Chris Sabo was one of those guys my buddies and I would endlessly make fun of at baseball practice or in the dugout at games.  I mean, who looks like that?  Still, "Spuds" played his fanny off every game and had some pretty good years for the Reds.  He's a fun player to collect.  Todd Zeile in an Orioles uni -- nice!  He only played 29 games in Birdland, but that kinda steps in line with his career.  He basically wore a uniform of half the teams in baseball.  Okay, not quite, but you know what I mean.  [Ed. Note: Two Orioles cards in this post so far, Mrs. K.  Happy now?] 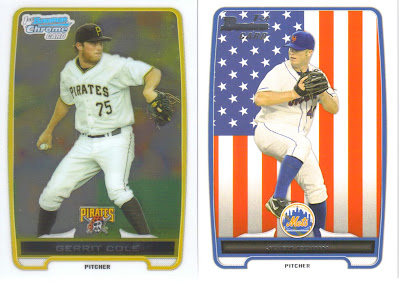 Still more??  Indeed!  In one of our email exchanges, I mentioned that I liked the Gerrit Cole Bowman Chrome rookie Marcus had on his trade page.  Bingo!  I now have his base card and his Chrome.  Maybe I'll try to chase one of each parallel for the former No. 1 overall pick.  And the sweet parallel card of Mets prospect Josh Edgin was a nice surprise.  I don't really follow the progress of minor leaguers as much as I should, but a quick glance at his numbers this year at Triple-A Buffalo: 3-2, 3.89 ERA, 40 K in 37.1 innings.  Not too shabby.

I couldn't have picked a better trade partner for my first crack at the trading game.  Thanks much, Marcus.  I look forward to our next exchange...
Posted by Mark Kaz at 1:00 PM