I had all sorts of cool mail waiting for me when I arrived  home on Monday.  The mailbox at the K house was happily stuffed with envelopes/packages from fellow bloggers.  Among them were my winnings from the Crackin'Wax A&G  break, which I've detailed previously here.  Cards of Ike Davis, Johan Santana, Jason Bay (blech!) and Tom Seaver all arrived safely -- whew!  So, thanks once again to Topher for that.

Then there were two packages containing the front ends of trades that I worked out with two quality bloggers.  One was from Corey over at the Tim Wallach blog, while the other was from Dustin at Coot Veal and the Vealtones.  Both packages had outstanding stuff in 'em!  Their respective ends of the exchanges will be dropped off at the post office today.

I split the trades up into a pair of posts, and I'll use this one to share some of the goodies I got from Corey over at the Wallach blog.  I'll cover the Vealtones treasures in post later today.

When I first found out about Corey's blog, I had to contact him to say, "I'm in!"  If you're not familiar, the mission of his blog is to collect every single Tim Wallach card that is out there.  Not just one of each, but every card bearing Wallach's likeness that was ever printed.  How can you not respect that mission?  More than that, how can you not want to contribute!?  Anyhow, I emailed him, he emailed me.  We laughed, we cried, we made a deal.

I wasn't sure what he would send me, but I saw trade posts involving Corey on other bloggers' sites and those guys got lots of neat stuff.  So I was pretty excited...

...and I was not let down!  Here are just a few of the great cards I received:

Some amazin' older cards of Cleon Jones, Tom Seaver (and friends), and a brilliant 1983 Topps Traded of Keith Hernandez!  I'm not sure which of these cards I was most excited about, honestly.  They are all outstanding in their own way.  Getting a card of Cleon was great since I didn't own any of his cards previously.  It's also in way better shape than many of the other 1968's that I have.  Most of those seem to be badly miscut, etc.

Anything vintage of Seaver's is gold to me, obviously.  Tom Terrific topped the NL in strikeouts (again) in 1971 with 289, a total which wound up being his career high.  Seaver led the league in K's five times in a seven-year span between 1970 and 1976.  He was traded to the Reds in '77. [Ed. Note: I'm glad I wasn't born yet when that occurred.]

As for Mex, I love having his "first" Mets card.  Hernandez begrudgingly came over to the Mets via trade from St. Louis during the '83 season.  In 95 games as a Met that season, he batted .306 with 20 XBH and 37 RBIs.  I am a huge Keith fan, and I'm happy to finally have this card in my Keith collection!

I also got some Mets from the mid-90's, which happens to be one of my favorite eras of the team: 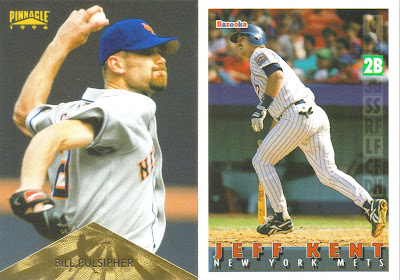 I think every Mets fan was drunk with ecstasy with visions of Bill Pulsipher, Jason Isringhausen and Paul Wilson fronting the Mets rotation and leading them back to prominence.  Yeah...that never happened.  It didn't even come close.  As a matter of fact, the wheels to that bus fell off before it even left the depot.  Still, it was a very hopeful time to be a Mets fan.  And, I love this card of Billy.  Pinnacle '96 is a nice looking set if I may say so.

Ahh, Jeff Kent.  I maintain that he is a mortal lock for the HOF.  What he did from a run production standpoint as a second baseman was pretty unprecedented.  Naturally, all of it occurred after his time as a Met.  Oh well, Kent was an awesome player and I remained a fan of his even after his days in Flushing expired.  By the way, these Bazooka cards are pretty neat.  I don't think I have any of these in my collection.

This was a really fun trade package; thanks again Corey!  And continued luck with your Tim Wallach quest.