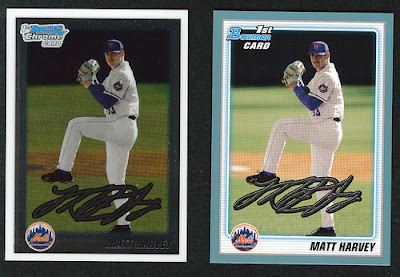 Okay, I'll admit it.  I was swept up by Harvey Hysteria.

Last Thursday evening as I was following Matt Harvey's ML debut via Yahoo's Game Channel and Twitter, I was browsing the ever-famous online auction site that we all love.  As his strikeout total continued to climb and my excitement level began to intesify, I began to search in earnest for a Harvey rookie card worthy of my investment.

Call me a sucker, but it's not very often a Mets rookie takes the late edition of Baseball Tonight by storm.

After a thorough search, I finally settled on a reasonably priced "Buy It Now" lot that included a pair of 2010 Bowman Draft cards -- one chrome and one blue-bordered parallel numbered 116/399.

I fully understand that Matt Harvey is just as likely to give up six runs in 2 1/3 innings in his next start as he is to duplicate the mastery of his debut (11 Ks in 5 1/3 IP).  But, at the very least, having a pair of true rookie cards of a record-breaking Mets rookie is pretty cool.  And it's not like I broke the bank to make it so.

Anyhow, the cards arrived today -- just in time for career start No. 2 later tonight -- and I'm quite happy with my purchase.

Here's to many more dominant outings by Matt Harvey!