I had a pretty great experience at my local card shop yesterday, and it goes a little something like this...

My local card shop, The Collector's Box in Newark Del.,  is a short distance from our house and it's not unusual for me to pop in there a couple times a month on my way home from work -- as was the case yesterday.

More so than anything, I utilize this shop for their vast assortment of hobby supplies, such as penny sleeves, pages, binders -- you know, the usual.  But, of course, once I'm in there I have to look around.  And, usually that involves going through the "discount" box, which is basically a .50-a-card collection of recent base cards and inserts housed in several 5,000-count boxes.  I've mentioned these boxes before, and how sometimes you find a really good deal, sometimes not.

Well, nothing extremely ground breaking this time around, but I did find some great cards that I deemed worthy of purchase.  Among them were cards from a 2006 Fleer set called "Greats of the Game", of which I'm not familiar.  But, they looked pretty cool and they had some players that I liked: 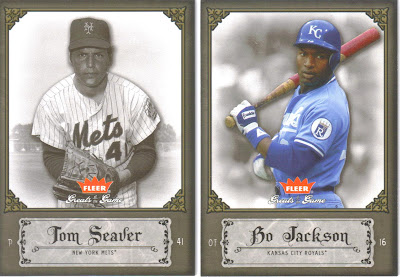 The Seaver was a no-brainer, but I also could not resist the Bo Jackson card.  Especially not when he's wearing the sweet powder-blue Royals unis of the '80s.  There were a bunch of other base cards from this set mixed in as well, many of which were as nice looking as the above.  But, at half-a-buck per card, I didn't go crazy.  Maybe another day.

They also had some inserts from the same set, three of which I snatched up, as well: 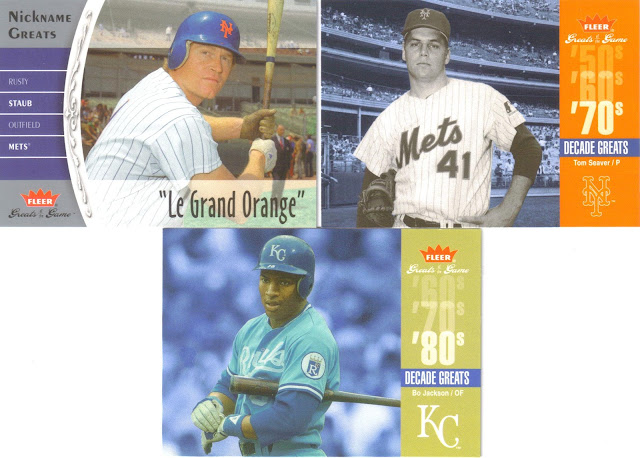 Finding cards of Seaver or Bo isn't really an extraordinary occurrence, but finding a Rusty Staub certainly is!  "Le Grand Orange" is one of those guys who will always have a place in Mets lore, and I think it's outstanding that Fleer went deep enough into the pool of retired Mets players to recognize someone other than Seaver, Gooden, Straw or Carter in an insert set.  Not that I don't enjoy all those players, but you know what I mean.  Speaking of Seaver, how badass does he look in that "Decade Greats" card?  That's either his game face or he just wasn't in the mood for a photo that day.

Moving on now, but staying with the retired Mets theme.  I found these Topps inserts from recent years that I didn't already possess:

Of course, the vast "Topps 60" insert set is from 2011 Topps, while the faux '62 Seaver is from something called the "Topps Vintage Collection" in 2010.  Not super-familiar with this set, but I know they put a bunch of HOFers on card designs from years that did not coincide with that player's career.  Topps has never done anything like that before or since, so that's pretty cool.  [Ed. Note: Sarcasm much?]

And finally, these two inserts were much too splendid to pass up: 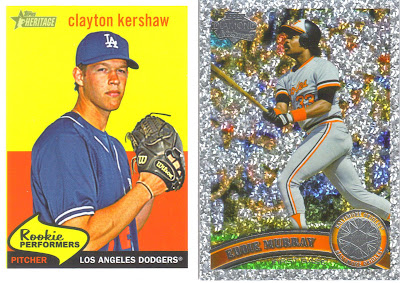 Both of these were real eye-catchers.  The Kershaw is a "Rookie Performers" insert from 2008 Heritage, while the sparkle card of Eddie is...well, you know what that is I'm sure.  The Kershaw alone books for $8 as I found out later, so the five bucks I spent for all of the above cards seems like an OK deal to me!

But, before I headed to the register with my package of penny sleeves and the 10 cards you see above, I decided to grab an over-priced pack of 2011 Topps Heritage from the nearby counter.  Aside from the box topper being removed, the hobby box looked untouched and every pack was still nestled in place.  So, I grabbed the middle pack off the top, paid for all my goodies and headed home.

Well, I don't know what it is about '11 Heritage, but I've had an insane streak of luck with hits.  First it was a relic card (Mark Reynolds bat), then a stamp card (Nelson Cruz/Brett Myers), and now this: 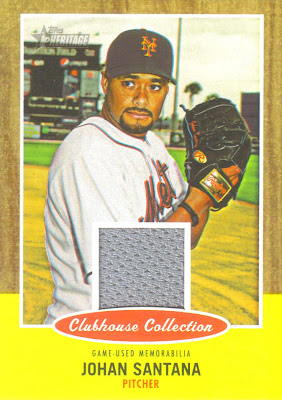 What are the chances??  One pack and I get a jersey relic, and a Mets player at that!  And I didn't even have to "pack search".  I don't feel so bad about overpaying for the pack after all.  Truth be told, I would've been happy to just get an SP, but this was definitely a great surprise.  I guess the owner of my card shop is an honest chap since this pack was allowed to exist in the box.  Good to know.

Anyhow that's how it went down.  I'm not expecting the lucky streak to continue, but I wouldn't mind it!

Talk to ya soon, and happy collecting!
Posted by Mark Kaz at 12:07 PM