I haven't done a formal survey, but the consensus among my peers seems to indicate that the second Godfather film is the one that is most fancied.  I'm not in that crowd, but I can understand where they're coming from. That's not to say I don't like the second film -- quite the opposite.  But, for my money, the original can't be beat.

What does this have to do with anything?  Well, not a whole lot I suppose.  But, I recently completed my second transaction with Tim over at the Home of the Toddfather blog.

I know what you're thinking:  So which trade was better?  This second installment of the Toddfather or the Original Toddfather?

My answer:  Every trade is glorious and beautiful in its own way, of course!  How can I choose when Tim keeps hooking me up with such great loot?

Let's take a peek at some of the highlights from this great lot: 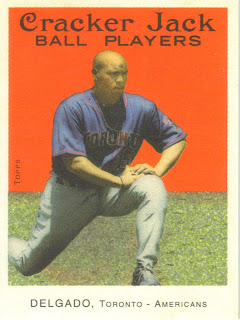 Tim sent me a couple of unique cards of Carlos Delgado for my player collection.  One was a disc-shaped card from the 2003 Fleer Hardball set, while the above is a mini sticker parallel from '04 Cracker Jack.  I love the Cracker Jack set and might put my mind to completing it some day in the future. 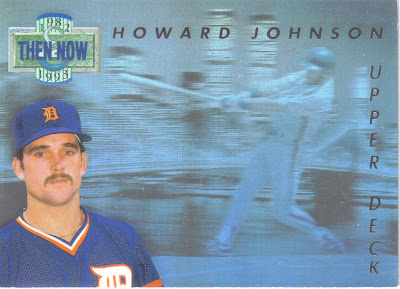 That's a dazed-and-confused HoJo from his Tigers days at the bottom left.  In the background is a holographic image of Howard swinging away from left side of the plate...right in front of the Brooklyn Bridge.  Of course, also having the Twin Towers in the background is a beautiful touch.  It's nice to have an image of the Towers preserved on a baseball card.  I'm a big fan.

Next we have a baseball card that thinks it's a label from a bottle of iced tea, or something: The unique shape of this card coupled with printed elements such as "All Ingredients Added" and "2.7 FL. OZ." has me a bit confused.  Plus, there's the name of the insert, "Hot Ticket."  Is this supposed to be a label off a Snapple bottle or a can of bug spray?  Hey, I'm not sure what Fleer was aiming for with this particular insert set, but I really like this card of the great Vlad Guerrero.

One of my all-time Mets favorites is featured on this next card: 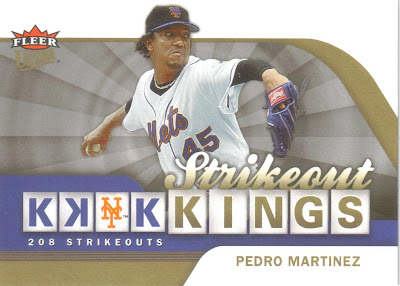 A very cool 2006 Fleer Ultra "Strikeout Kings" insert of Pete.  I've said it before and I'll say it again, Fleer made some pretty damn cool insert sets.  Great addition to my Pedro collection!

One of my bigger player collections centers on Mike Piazza.  Tim flipped me a couple beauties of the future HOF catcher, including this guy: 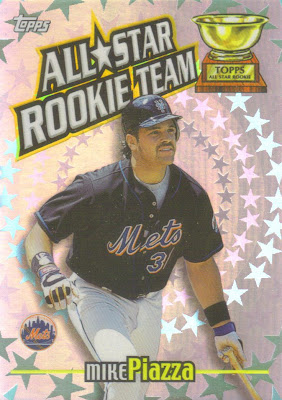 If you've got a thing for the Topps rookie cup, like me, this 2000 Topps insert set is right up your alley! Remember in 2010 when Topps changed the color and appearance of the rookie cup?  What were they thinking?! Glad they changed it back, though I think it's getting smaller and smaller by the year.  I'm not saying it should be the size of the enormous cup on this Piazza card, but beef it up a bit please. 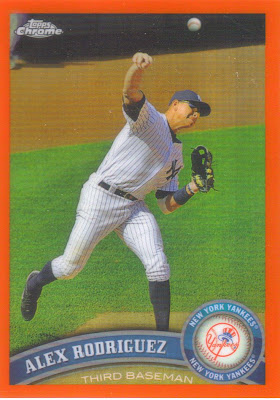 And an orange refractor, to boot!  Call me a sucker, and I hate to admit this, but I really like the colored parallel cards.  It gives us player collectors a little something extra to go after.  This A-Rod was a most gracious inclusion in the trade package, and a great card on which to conclude the highlights portion of the post.

Many thanks once again to Tim at the Toddfather blog.  It's been a pleasure not once, but twice!