He debuted in September 1976 for the Orioles and threw his final big league pitch in September 1998 as a member of the Braves.  In that time, Dennis Martinez, aka El Presidente, racked up 245 victories and compiled a career ERA of  3.70 over 23 season.

On August 9, 1998, Martinez threw a scoreless 8th inning out of the bullpen and wound up the winning pitcher in Atlanta's 7-5 triumph over the Giants.   The victory gave the Nicaraguan-born Martinez 244 career W's, moving him past Hall of Famer Juan Marichal and, thus, making him the winningest Latin American pitcher in baseball history.  I don't know about you, but I think he's going to own that distinction for a long, long time. 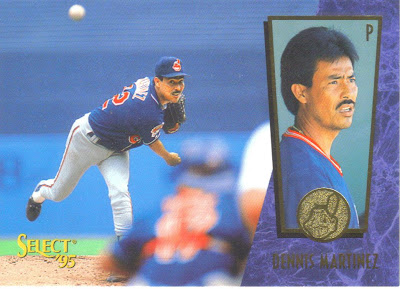 About the Player:  I've always admired pitchers like Dennis.  I sort of group him into the category with contemporaries Jack Morris and Dave Stewart, insomuch that they don't get the acclaim they deserve.  I can't say for sure if El Presidente should be in Cooperstown, but most pitchers would trade their left kidney and a few toes to have the career this guy had.

About the Card:  1995 Score Select (#130). Anytime I see a Denny Martinez card in a dime box, I always throw it onto the "buying" stack. He never pitched for my favorite team and he wasn't a guy I noticed a whole lot when I was younger, so I'm not sure why I collect his cards. Nonetheless, I've amassed quite a few over the years.  I think I probably got this one out of a pack of '95 Select.  I wasn't a huge fan of Select over the years, but I like the action shot they chose for this card.  The gold-stamped team logo is a nice touch, too.