Yeah, in case you were wondering how I made out in the Elite 8 round of the Nachos Grande blogger bracket challenge, it wasn't pretty.  My bracket was busted and your's truly -- the No. 25 seed playing the top dog -- was given a bitter dose of reality.


If any of you are NCAA hoops fans, you no doubt remember the crushing defeat suffered by Adam Morrison and upstart Gonzaga Bulldogs in the Sweet 16 back in 2006.  The Zags led the UCLA Bruins by 17 points at the half, but it wouldn't hold up.  Thus, the weeping mess you see in the still frame above.  Morrison got a lot of guff for his histrionics as the clock ran out, but I was a fan of his before this happened and I stuck with him in the aftermath.  Tears or no tears, I can never assassinate a man's character based on his intense desire to win.

Well, compared to the final score of my matchup with Carlos at Chuck's Corner, Adam and the 'Dogs got off easy (albeit with much more crying).

How about five votes?  Keep going.

Ten?  This may take a while.


But, as with most things, the journey outweighed the final outcome.  I had a great time with the contest and discovered some blogs I otherwise wouldn't have seen and/or read.  Carlos did a fine job with his post.  I congratulate him and wish him well in the next round.

And lest I forget, allow me to dole out sincere thanks to everyone who took the time to participate and cast a vote for my corner.  I got as far as I did thanks to all of you!

While it's a bummer to have my bubble burst, I have a bright side to bask in.  I can now dedicate more of my blogging time to waxing poetic about B.J. Surhoff cards from toy store factory sets. 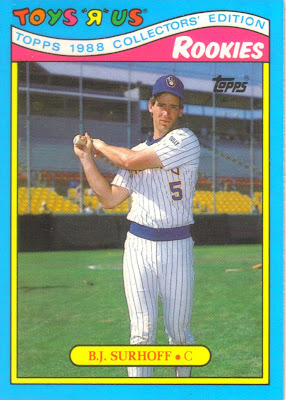 Surely, this is a card that could launch a thousand ships.  I wish Topps and Toy "R" Us still made sets like these.  So glossy, so colorful, so...good.

Anyhow, thanks again for your support.  And happy collecting!