The Whole Kit and Kaboodle (aka A Trade with Backstop)

If you follow the blog "All the Way to the Backstop..." like I do, you probably came across the article Marcus wrote last week in which he talks about whittling down his collection.  This kinda went lockstep with the trend that kicked up some dust over the past couple weeks in which several of my favorite bloggers expressed their desire to take time off from blogging or pare down their collection or something along those lines.

Talk about a sinking feeling!  I'm just getting started with this blogging thing and many of my favorites are pondering a downshift?

My fears grew over the past weekend when I received a package from Mr. Backstop, aka Marcus, that was the size of a Britannica volume.  It was stuffed with five team bags brimming with cards from all over the card collecting map.  I excitedly went through each team bag and found gobs of amazing cards.

Some were a bit too amazing, like this one:

So with my concern level high, I emailed Marcus to find out if he bumped his head or not.  Thankfully, he responded and assured me his coconut was fine.  And that was indeed paring down his collection, but not discarding the hobby or his collections.  Basically, he was just finding some good homes for cards that were not essential to his collection.

Well, that's good news on multiple fronts.  Foremost, I'm happy to know Marcus will still be bloggin' and collectin', because I definitely enjoy his thoughts and words on the hobby and his collections.  After all, his blog was and is an inspiration for my own.

And, as it pertains to me, I'm all too happy to be the recipient of some great cards!

So with a clear, calm head, here are some more highlights from the massive mailing: 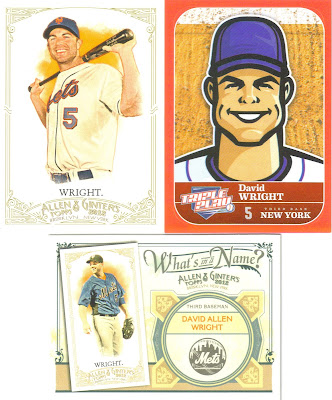 Three David Wright cards that I did not have in my collection previously.  Score!  I know it's probably old hat, but count me a fan of the "bat over the shoulder" pose.  And it looks even better on a A&G card.  The Ginter insert is pretty great, as well.  And, is that a Triple Play sticker I spy?  Yup, my first time seeing anything from the 2012 Triple Play product up close.  To be frank, I'm not a fan of cartoon cards, especially those without the team logos, etc.  But, now that I can inspect them in person, they're kind of cool. 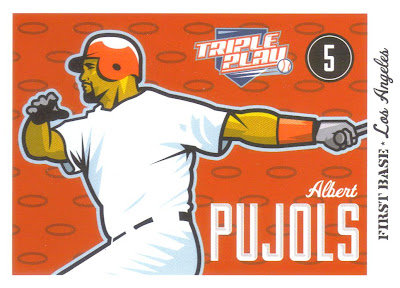 Now, I'm still not going to be buying any packs of this stuff, but this Pujols card is pretty darn nice, and I'm happy to have it in my collection.

Same goes for this Ike Davis: 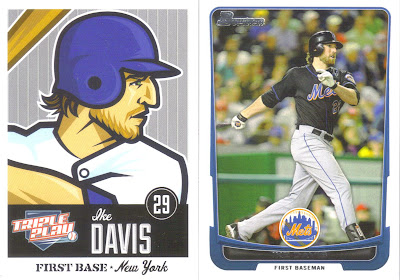 This is a great artistic rendition of Ike: big schnoz, scruffy facial hair and all!  Very cool!  Along with the Triple Play, Marcus also tossed in a few other base cards of Ike, including his 2012 Bowman, which I did not have.

Staying with the Mets theme:


I was completely geeked to receive this card!  Harvey continues to impress with each outing.  His electric debut created a lot of buzz and even higher expectations, but he's acquitted himself quite nicely in the aftermath.  I'm keeping my fingers crossed and knocking on wood, but I think he's a future star in the Mets rotation.

As much as I love Mets cards, I love oddball cards almost as much.  So when I saw these guys I was very pleased:


My only exposure to the 1989 Cap'n Crunch set is in the form of a dime-box find from a couple years ago.  It features Will Clark with a fake-looking mustache.  I love these cards, and I'm gonna have to complete the set now because I have OCD.

How about a pair of HOFers?


In regards to the Mantle, this is one of the rare Mantle cards that Topps has done that doesn't make me roll my eyes.  I mean, we're all sick and tired of having Mickey Mantle shoved in our faces in every release Topps does, aren't we?  I know I am.  But, this one is so unique looking, that I can't help but showing it off.  Great artwork in this Chicle set, too.  I don't know why I didn't buy any of this stuff when it was out in 2010.  As for the Schmidt, there's not much to dislike.  It's a cool insert of an all-time great.  And it features a powder blue uniform.  What else do you need?


The iconic Michael Jordan '91 Upper Deck card.  I never owned one of these, but obviously everyone I knew who collected cards back in the day would've sold his sister's spleen to have a copy of this.  Luckily for my sister, her spleen is intact.  And, good ol' Brett.  I saw him on TV Sunday night throwing footballs on the beach to B-list celebrities and washed-up former superstars in some Madden '13 release event.  Eighty years from now, Brett will be nothing more than a head on a stick and he'll still be trying to flick paper footballs with his eyelashes.  I guess you gotta take your hat off to the guy for being such a competitor.

Lots more in this trade package, but that's a solid sampling of highlights.

Marcus, you are a good man!  Thanks for sending the goodies my way.  They have found a good home, I assure you.