[Ed. Note: Due to the kindness of strangers, I have advanced out of Round 1 of the Nachos Grande bracket challenge (I'm Mark, in case you didn't know).  Ranked No. 25 out of 31 teams, I am the lowest-seeded entry to survive -- a fact I shall wear as a badge of honor.  Still a ways to go before the finish line, however.  The following post constitutes my second-round contest entry.  And, don't worry, I'll bang on the proverbial pots and pans when Round 2 voting goes live.] 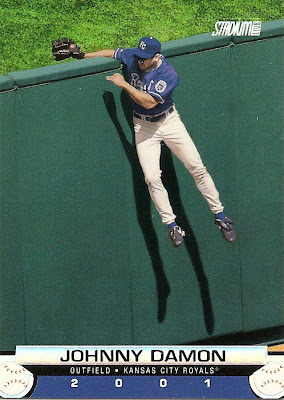 From the home office in Fort Riley, KS, and submitted for the approval of the sportscard blogosphere worldwide, here are the...

No. 9:  Began practicing the Lambeau Leap during an agonizingly long inning by pitcher Jeff Suppan.

No. 8:  Fleeing a gaggle of Japanese tourists who thought he was the GEICO caveman.

No. 7:  There was an engineering malfunction on the Jump to Conclusions mat.

No. 4:  Perfecting his slamdance routine for the next Kid Rock concert.

No. 2:  Testing out the Nike's new plyometric baseball cleats. "Johnny couldn't jump at all before he got these.  Johnny...was like you."

And the Number One Explanation of What's Happening in Johnny Damon's 2001 Stadium Club Card:

Dude, it's Johnny Damon.  Who the hell knows?!