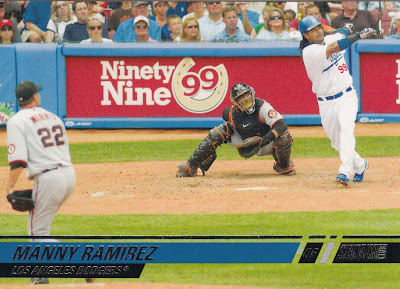 So, thanks to Michael at Nomo's Sushi Platter, I finally have one of the iconic cards of recent memory.  Boy, I've seen this card get some well-deserved attention on more than a couple of my favorite sports card blogs. And I was instantly smitten upon seeing it.  An obvious Photoshop job if there ever was one, replete with an invisible umpire.  This is truly a gem among trading cards.

This was but one of the many great cards I received from NSP recently.  It was my first exchange with him, but I knew I was in for something extraordinary based on the countless other trade posts I've sen on other blogs.

And, I've learned in a short amount of time that some of the best folks to swap with are Dodgers fans.  Well, at least that's the case for me.

Why?  Simply because I tend to get excess amounts of cards of guys who I love to collect.  Such as Manny Ramirez (see above).

And Mike Piazza, the greatest offensive catcher of all time (my opinion, not necessarily fact). 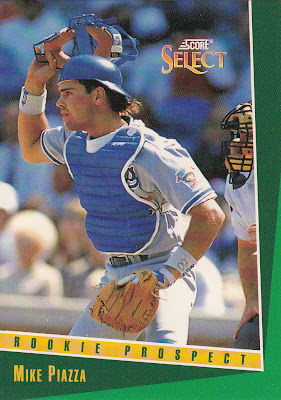 And Jeff Kent, the greatest offensive second baseman of all time (again, my opinion) But, my trade with Michael wasn't just a case of Dodger overload.  I also received a fantastic addition to my Carlos Delgado collection. 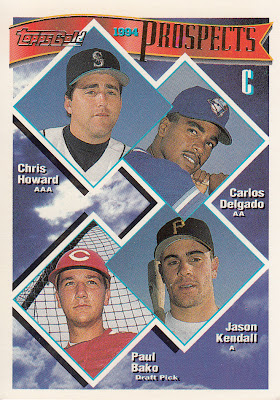 Gold, nice.  1994 Topps made a pretty snazzy multi-player "Prospects" card, if I may say so.  And not only do you get Carlos on this particular one, but also Jason Kendall.  He was a darn good backstop and offensive contributor for quite a few years.

Finally, I know collecting Albert Pujols cards isn't exactly rare or original, but the guy is such a monster of the sport I can't help myself.  And this next card is certainly uncharted waters for me. 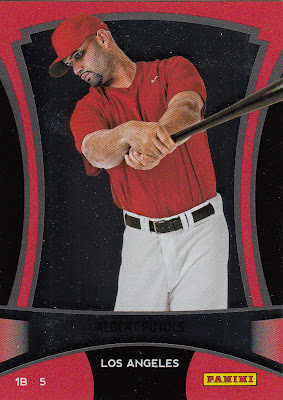 I certainly don't have any of these Panini cards in my collection.  And, ya know, I don't mind the blank hat and jersey top.  I certainly like this more than the cartoon cards, as well as the Cooperstown set with all the heads cut off and angled bodies and so forth.  Don't get me wrong, I think that Cooperstown set is a brilliant premise, and the design of the cards themselves is magnificent.  I wish like heck that Topps would do something so wonderful.  But, the cropping does bother me.  Not enough to never pursue the cards, but it's something that is pretty tough to ignore.

Anyhow, this is just a small smattering of cards that I received from the Left Coast in recent days.  Thanks a bunch, Michael!