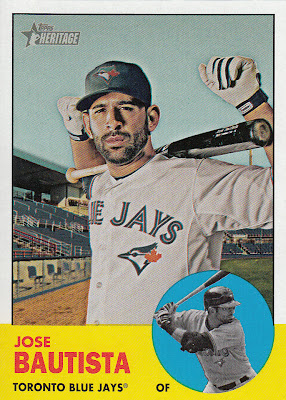 This one falls into another one of those handy "formula pose" categories.  There were a few very decent bat-over-the-shoulder cards in this set.  One of which is card no. 361, Mr. Alex Rodriguez.

I had a tough time deciding between A-Rod and the eventual selection, Jose Bautista.  I think the tie-breaker was twofold.  Firstly, the above is a short-printed card.  Secondly, Joey Bats has launched a whole lot more baseballs out of ballparks recently than the controversial Rodriguez.  Thus, he gets to be the 2012 Heritage flag bearer of this style of photograph.  At least on this countdown.

I'm absolutely a sucker for photos like this.  Just a man and his bat, getting cozy before battle.  The only thing better is when sluggers are photographed in the dugout or on the on-deck circle wielding three bats at once. You don't see that much these days.  I suppose batting weights (you prefer donuts?) have removed the need for ballplayers to simultaneously choke multiple bats around their handles in today's world.

Anyhow, we here at the Clubhouse love this card because of aesthetics and because we're big fans of Jose Bautista.  The bright yellow and blue accent elements at the bottom of a card create a pleasing look.  And blue skies and bleachers in the background are always welcome sights.

The only demerit on this card is Jose's decision to keep the batting gloves on.  Otherwise, color me a fan.