They Got Me Again... 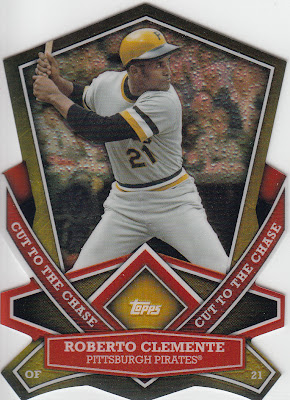 Gee, it's a good thing I promised myself prior to the dawn of 2013 baseball card 'season' that I wouldn't go too crazy with Series 1 Topps.

Over the weekend, Mrs. K and I were out and about and eventually our trail led to Wal-Mart.  And, naturally, the siren song beckoned me to the card aisle.  There were some reduced-price rack packs of 2012 Bowman Platinum and Topps Chrome, as well as some of those nifty "Best of 2012" repacks featuring the assorted Topps products.

But, apparently I only have eyes for the newest Topps issue these days.  The suits at Topps must love guys like me, seeing that I'm such a sucker for their gimmicks and color variations and such that they plant in their blaster boxes.

I have nothing to state in my defense, sadly.

Okay, so I bought another stinkin' blaster.  My fourth of the season.  I guess that isn't exactly grounds for an AA-style program, but it's pretty bad.

Anyhow, I got some pretty nice stuff.  Chiefly, the Clemente "Cut to the Chase" insert above.  Man, these things look great.  I previously got the Musial, and now I happily add this to my collection.

Besides the Clemente insert, I netted 19 new blue borders (one was a dupe; it was bound to happen eventually). 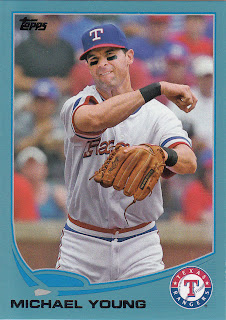 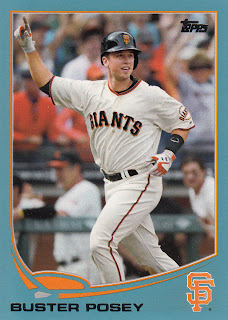 My blue total is up to 93 of 330, or 28% complete.  Pretty satisfactory progress so far.  I'm still in the honeymoon phase with these things and, eventually, I'll hit a roadblock that will cause me to pull my hair out. I'm thinking that getting the Trout card might be one of the toughest obstacles remaining.  Ditto for Harper. 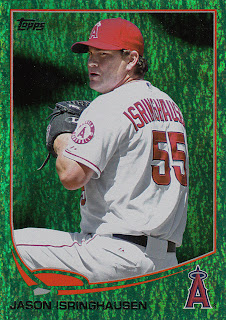 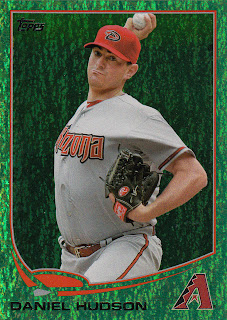 More greenies.  Ya know, I haven't pulled one "star" player -- or at least a player that I collect -- in this variation yet.  No Mets, either.  It's either platoon outfielders or middle relievers for the most part.  Sigh. 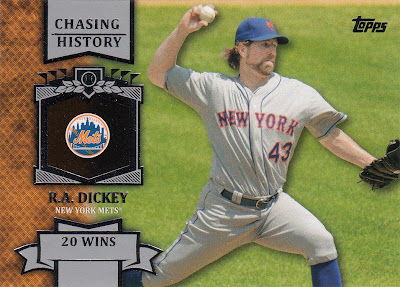 Ah, that's a little bit better.  I don't think it's fully sunk in yet that Dickey won't be a regular at Citi Field this year. Once it does, I'll settle into a nice little shell of depression.  I still wish him well, and hope he has a fantastic year for the Jays.  And, I'm actually okay with the Mets' return in the Dickey trade, so that makes it a bit easier, too. 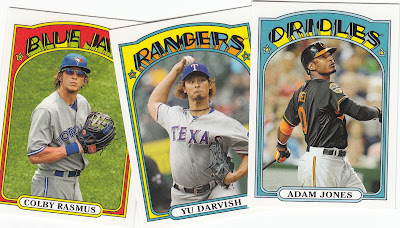 And now the time has come for me to get on my annual "Topps collation stinks" soapbox.  I accept the fact that the base card collation is pathetic, but this shouldn't ever be the case for inserts.  I mean, I should never receive the exact three 1972 minis that I received in a prior blaster.  Yet, the proof is in the pudding.

I don't intend to end on a sour note, so I'll now transition into a happier matter.  Here's the contents of my special manu-patch packet: 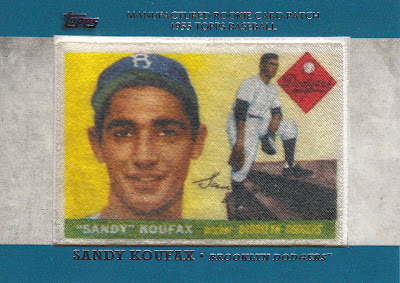 A very classy presentation here of Mr. Koufax.  I really hope Topps keeps this theme going for the next two flagship releases of the year (S.2 and Update).  It would be especially cool for Update to have these patch cards for some of the more notable Traded or Update cards from their annals.  And they needn't necessarily be rookie or first-year cards.  A 1985 Traded Gary Carter or an '89 Traded Nolan Ryan patch would both be nice collectible pieces.  Or is that just me?

Well, thanks for checking in.  And may you have good fortune with your impulsive blaster, hanger box, jumbo pack and single pack indulgences!