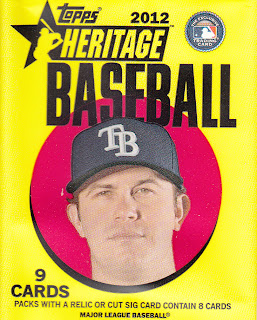 In two weeks from today, we might expect to find 2013 Topps Heritage seeping into the sports card section at our two favorite retail chains.  Technically, the street date for these cards is Wednesday, March 6 (have I got that right?), but you know how that goes.  Usually your local Target or Wal-Mart or both are wont to put these things on the shelf a day or two in advance of the hobby stores.

As exciting as that is, it's an equally enormous letdown when you got to said super-chain stores on that Monday or Tuesday only to find a bunch of 2013 flagship and a slew of random of hockey blasters (no offense).  But, that possibility won't keep me away from either joint on either day, believe me.  Not when we're talking about Topps Heritage, my favorite product offered by the hobby czars.

So, to feed into my excitement level, I thought it might be fun to identify the top 12 cards from the 2012 Heritage base set.  That includes the short prints (though, I'm still lacking five), but excludes any inserts, subsets or the dreaded high numbers appendix (I don't want to start any riots).

This is a tough set to crack into from an aesthetics standpoint, since the majority of the cards are cliched poses and head shots.  That doesn't mean I don't love this set, as I most certainly do.  Very much so.  I just think it works better when viewed as a whole.  You know, as a complete set.

Nonetheless, there are some true beauties within 2012's Heritage edition that stand out just fine on their own. And I've made my list of these very cards, and will count down the top dozen, descending from 12 to one.

Without any further stalling or hype, let's get down to business.  I'll be dedicating a post per card, so as not to create a mega-post... 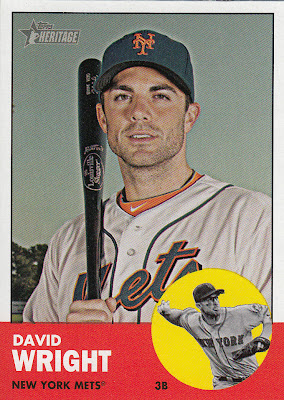 I can already hear the howling.

How typical, a Mets fan choosing a Mets card.  What a homer!

But, trust me when I tell you this isn't a completely biased selection.  And take comfort in the fact that is the lone Mets card that has cracked the top dozen -- and at No. 12, at that.

Full disclosure, however, you're seeing this card because it is a Met who happens to be David Wright who happens to be my favorite ballplayer presently.   Don't get me wrong, this is a very classic-looking card.  I think David and guys like Evan Longoria, Derek Jeter and Chase Utley are players who carry that timeless appearance and, thus, look completely at home on a Heritage design...or any design.  You could slap their visage on a 1955 Bowman reprint or a 2006 Topps Chrome card and they'd look equally appropriate.

I don't know if that makes sense to anyone else, but for me it works.

Alas, I chose David because, well, he's my guy.  If you're doing your own countdown and you're a Rays fan, maybe you choose Longo.  I don't know, but Wright is my choice at No. 12.

And, maybe I love this card a little bit more because it's a short print.  Maybe not.  After all, you'll find out in short order that this isn't even my favorite SP from the set.

Wright's 2011 Heritage short print is one of my all-time favorite baseball cards.  This one doesn't rank anywhere near as highly, but it's still a pretty darn good card.  Certainly good enough to be in my Top 12 of 2012 Heritage.