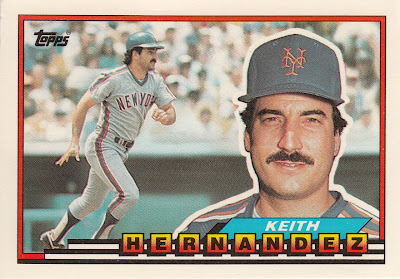 Over the course of the past week or so, this blog has kinda been dominated by trade posts.  Which isn't necessarily a bad thing for me, but it may get tiresome for the reader.

For me personally, I enjoy perusing trade posts on other blogs to see what sort of goodies are changing hands on a daily basis.  There's so much of it going on and so many great cards to check out.  I haven't gotten bored by it all yet.  Rather, I look forward to it.

I can't be the only one who feels that way.

Besides, if somebody is good enough to gather some cards, package them and drive off to the post office to send them to me, the very least I can do is spend a few minutes to give that person's efforts a proper write-up.

Furthermore, I don't possess the ambitiously creative and machine-like mind that others who ply this craft seem to have.  Allowing them, thus, to have original and brilliant content almost on demand.  I wish that were me, but...

So it's nice to have a crutch or two to support my content efforts.

Have I acquitted myself sufficiently to proceed with another trade post?  I sure hope so...

Michael, the Card Raven, and I have a few important things in common.  We both are lifelong Mets fans and, if my memory is steady, we both began our blogs around the same time.  To dovetail off the latter point, both of us were influenced in a very positive way by Nick P.'s tremendous blog (aka Dime Boxes).

All that being said, I can't believe it took us so long to hook up and complete a trade.  And after receiving my end of the equation in Saturday's mail, I'm certainly happy to have made the connection.

There were some big things -- in both a literal and figurative sense -- included in the card assortment Michael put together.

Big in size like the above Keith Hernandez 1989 Topps Big card.

And big in terms of player selection, particularly in regards to offensive productivity on the baseball diamond. 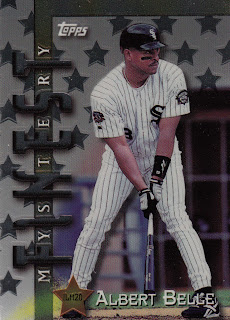 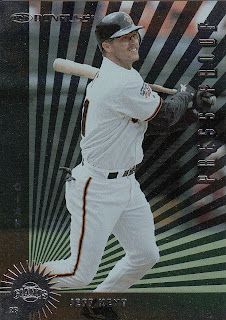 Belle ('97 Mystery Finest) and Kent ('97 Donruss Press Proof) are two of my favorite run producers of all-time. And these two cards represent two of the most attractive cards I've come across of either player.  I especially love the Finest, because it comes from a time period when Topps Finest wasn't a mailed-in effort like it appears to be at present time.

And to balance things out, there were also some small things.  Or mini, if you will. 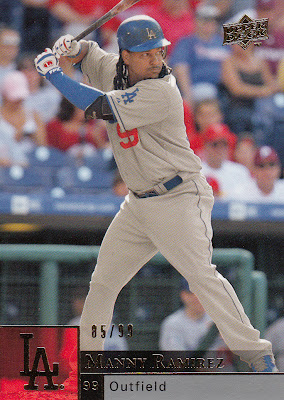 That's numbered 85/99, in case you can't make it out.  Pretty cool considering that Manny was wearing the number 99 for Hollywood back then.  What a beauty of a card.

It seems Michael did a bang-up job on handling all things big and small, but there's even more. 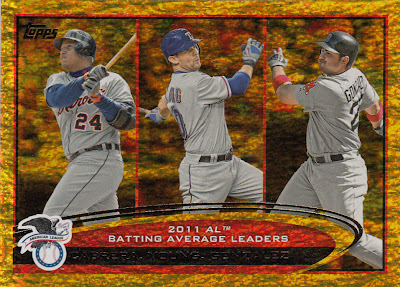 Not sure which player collection might be graced with this one, yet.  I'm actually leaning towards Adrian Gonzalez, since I've kinda caught the collecting bug with him lately.  However, isn't it more proper to award the card to the tally of the guy who's the actual league leader?  Hmm.

There were also cards of those Amazin' Mets. 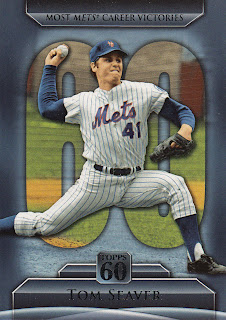 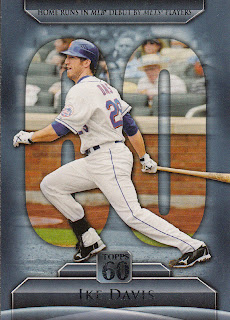 I don't know why I didn't pay more attention to these "Topps 60" inserts back in 2011.  Because every time I come across them, I tend to like 'em.

Then we have a card of a Card showing off one of my favorite baseball card poses. 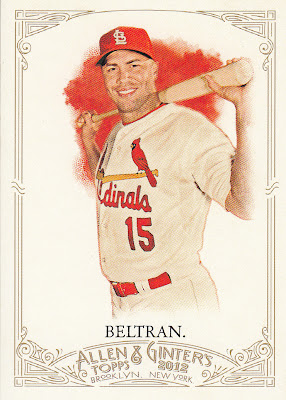 Classic.  You know, if Ginter didn't feature oddball cards of non-baseball people, I'd really be into this set.  I love the feel of the cards, as well as the design elements.  Then again, I guess Topps produces enough "normal" card sets for the rest of us.  I you want a card featuring Erin Andrews or a picture of a honey badger (perhaps both?), I guess A&G scratches that itch.

Last but not least, a card towards my remaining 2012 Topps flagship needs. 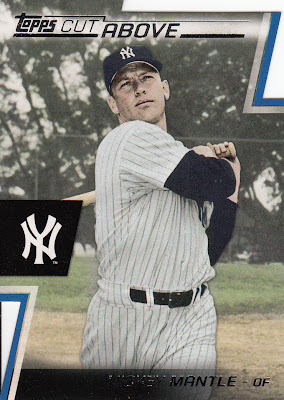 Yeah, I still have a few of those pesky insert sets to knock out,  "Cut Above" being one of them.  The way Topps has previously flooded the marketplace with cards of the Mick, I can't believe I didn't already own five copies of this one.

With that, another trade post from a busy mail week concludes.  Thanks a million for the super loot, Michael!

By the way, I know many of you read Michael's blog but, in case you don't, he's trying to put together an entire 1993 Topps Gold set.  If you have any of those laying around, be sure to send them his way!

Oh, and a small heads up about the ol' blog here.  Since the March arrival date of 2013 Heritage is drawing ever so near, I'm planning on doing some form of little "Best of 2012" feature.  Maybe count down my top 10 or 12 favorites from that set.  Just a thought, since I wanted to do something to help ramp up the excitement to the release of my favorite product.