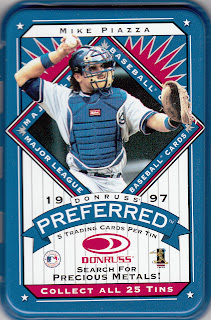 Are ya sick of trade posts?  Might want to divert your browser from this here page.  [Ed. Note: But not for too long please, we really like having you around!]

By fortune and circumstance, nearly every day this past week greeted me with another yellow mailer.  I'm certainly not complaining, trust me.

This will be the third straight post of mine to detail a fabulous trade bundle that came my way.

Still there?  Oh, good!  I haven't completely alienated everyone.

So, this most recent trade came by way of Tennessee and one of my favorite trading partners, Tim at Home of the Toddfather.  The eclectic nature of Tim's trade selections, coupled with the quality of the return makes Tim a fantastic option for trades.  I highly encourage giving him a holler ASAP if you're in the market for a swap.

Anyhow, the contents of this particular package contained two distinct items.  One was a mini Mike Piazza bobblehead (not pictured) and the other was the above Donruss collector's tin which was filled with a potpourri of tremendous cardboard. 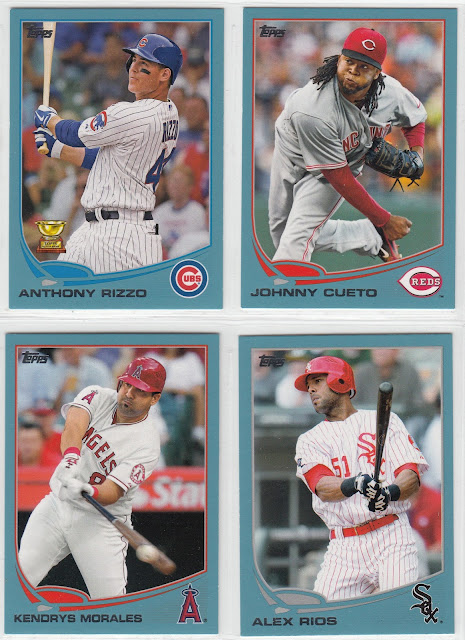 A four pack of 2013 Wal-Mart blues kicks off the highlight reel.  With every addition, I love these blue parallels even more.  Gotta love the Alex Rios in throwback duds.  Also, the moment of impact captured on the Morales card is pretty darn cool.

Next up, some golden UD Victory parallels from 2002, featuring a pair of my all-time favorite Mets. 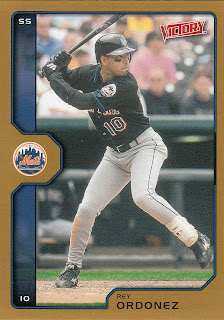 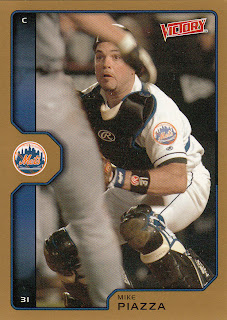 What a freakin' great shot on that Piazza card.  Upper Deck gets full marks for capturing the high drama of one play on a summer night at Shea Stadium.  Mike's eyes are Jackie Gleason-sized, focused on the incoming relay throw, while the base runner appears to be right on time with his fated collision course.  That, friends, is art!

This is also art: 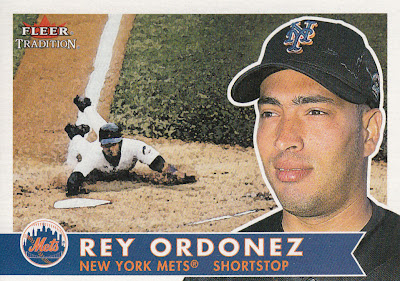 Tim has absolutely hooked me up with some super Ordonez cards over the course of our USPS bartering.  Love this one!

As a result of a prior exchange with the Toddfather, I received my first Mike Piazza card in which the slugger is sporting a Marlins uni.  I went gaga for it, simply because I had no idea there were any such things in circulation.

Well, now that card has a buddy... 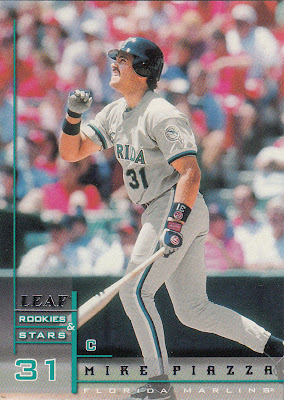 Great photo of Mike, as he squints through the blinding daylight to watch the product of his powerful handiwork. Outstanding card!

This package also featured a pair of firsts for me.  Like my first 1975 mini card... 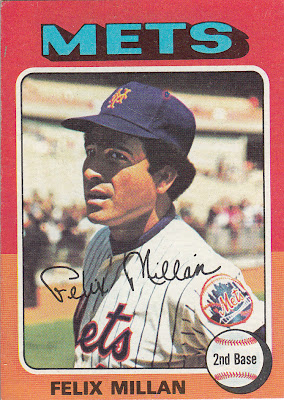 One of the leaders of the '73 pennant winners, Felix is a largely unheralded player.  In a dozen years as a big leaguer, he crafted a .279 career average and over 1,600 base hits.  The year that this card was produced (1975), Millan cracked a career-high 191 base hits.

The other "first"?  My first David Wright manupatch. 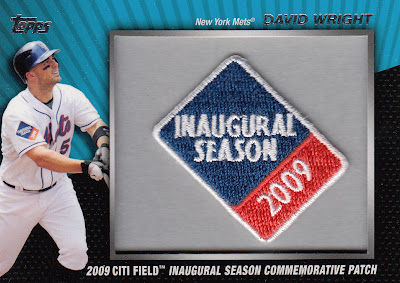 Replete with a replica of the "Domino's Pizza" Citi Field patch and everything!  This patch card hails from Series 2 of 2010 Topps.  And they even had enough sense to include a photo of David that prominently displays that very patch.

To cap things off, Tim was kind enough to track down a handful of Buffalo Bills cards from his football card collection. 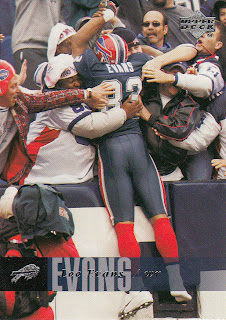 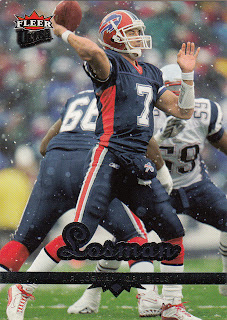 During the initial decade of this millennium, my beloved NFL club managed but one winning season.  And that effort -- a 9-7 record in 2004 -- didn't even produce a playoff trip.  In other words, they were (and are) as forgettable as the CFL-wannabe uniforms the franchise adopted between 2002 and 2010.

But, they're still my favorite team and I still enjoy collecting cards of all the players who wear/wore the red, white and blue.

So, there you have it.  Another trade post in the books.

Thanks once again for making me an extremely happy collector, Tim!