Red and Blue (and Chipper, too)

[Ed. Note: After consulting with Winnie the Pooh, I have altered the title of this post. Thank you.]

Whew, we made it to the weekend!  A long week replete with three nights of overtime at the ol' quarry has me ready for some R&R.  And some 2013 Topps!

On my way home from work Thursday I thought I'd treat myself to a 2013 blaster from Wal-Mart in order to procure some more of those snazzy blue parallels.

Little did I know that the thoughtful and beautiful Mrs. K had stopped at Target earlier that day and bought me a hanger box -- a little gift to help me relax after three long days.  So, I felt a little bad when I got home that evening and saw that she had laid out this little surprise for me before she left for her work shift.  I guess I didn't have to buy myself any new toys after all, eh?

Oh well, extra cards is better than no cards.  I got over my guilt real fast once I started ripping open the boxes. 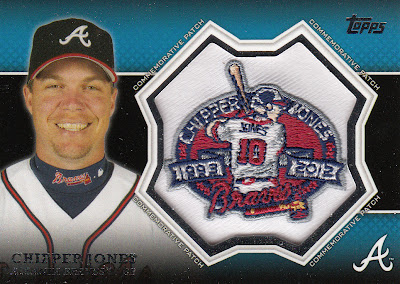 This was my patch card from the blaster.  I must admit that this is a pretty awesome patch, celebrating the terrific career of a player I loved to hate.  As attractive as this thing is, I'll likely be adding it to the trade pile.

Okay, onto stuff that I plan to keep...

I'll spare you the other inserts (alas, no Cut to the Chase card).  Not because they're somewhat boring (because they are), but mostly because I'm ready to get down to the meat of these boxes... well, in my world anyhow.  I refer, of course, to the colored parallels! 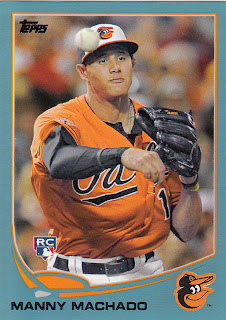 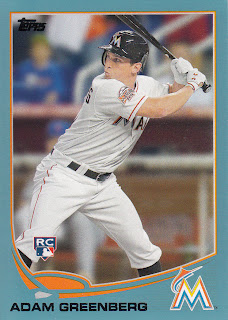 Twenty new blue borders towards my newest project!  Extremely happy to score the Machado and Greenberg cards, as I imagine these will be harder to pry away as we go along.

As mentioned, the hanger box from Mrs. K came from Target, thus my first exposure to the special red cards. 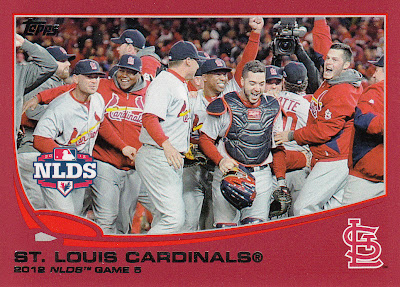 Overall, I still favor the blues.  But on certain cards -- like this one -- I think the red border really looks great.  If anyone is after these Target cards, give me a holler!

And, I did manage to snare a gold-bordered card, as well.  It came in the blaster box. 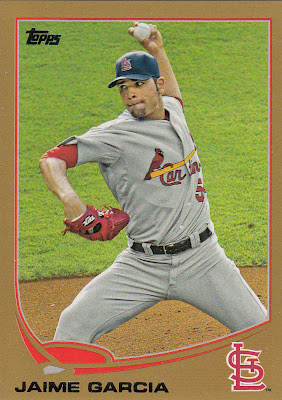 Overall, I made out just fine.  Nothing out of this world, but it was a great way to unwind on a Thursday evening. Plus, it gave me a nice big hunk of base cards and blues towards their respective checklists.  I'll probably spend some time later today sorting through everything.

You know, some more R&R.

I hope everyone out there has a great weekend!  If you live in the northeast and got some white stuff, don't overdo it with the shoveling out there.  Remember to take a cocoa break or two!