The Highs and Lows 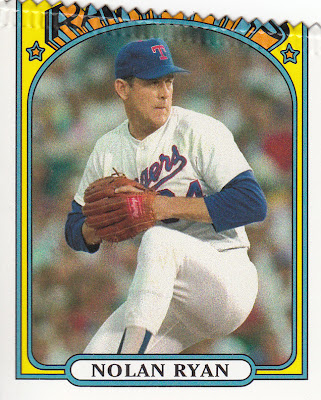 The card above doesn't really need explanation, does it?  It's the result of negligence and poor execution somewhere along the assembly line.  And just plain bad luck, yes.

So, what would otherwise be a happy occasion -- receiving a cool Nolan Ryan mini -- turns sour when other factors come into play.

Oh, hi there, folks.  Sorry to be so impersonal from the outset by diving right into things.  Let me backtrack by saying that this butchered card is one very sour note from my recent 2013 blaster purchase.

But, sour as it may be, that's really the only blight over the course of two blaster boxes that I recently picked up from Wal-Mart.  No, I didn't get any big, earth-stopping hits or anything along those lines (I don't even think those are possible in blasters, are they?).  Rather, I got another huge chunk of base cards and a nice big stack of blue parallels! 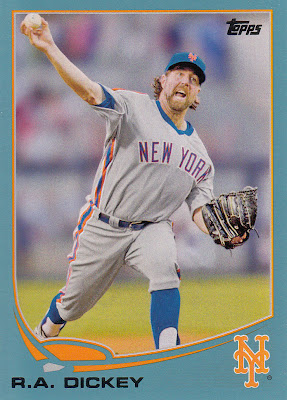 I think I've come to a decision in regards to the blue Wal-Mart specials.  I think I'm ready to commit to this as a set-collecting goal.  The fact that one blaster can yield 20 blue parallels is good ammunition.  A nod goes to The Junior Junkie for reminding me of this fact and urging me to go with the blasters.  Obviously, I wasn't sharp enough to read the box myself and see that every pack yields two blues.  I'm kinda ditzy like that sometimes, what can I say?

All of this has veered me away from the idea of going the hobby box route, also.  Sure, one hobby box pretty much puts you at the doorstep of set completion and gets you oodles of inserts and a couple hits, etc. etc. etc.

But, I'm feelin' kinda blue and think the Wal-Mart route is for me.  At least for Series 1. 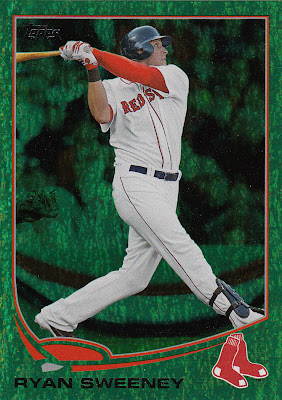 On the subject on colored parallels, I finally realize what these "emerald" guys remind me of.

While that thought freshens my mouth, it doesn't exactly get me excited for collecting.  Unless it's a player I collect or a Metropolitan, I'll be putting all these guys up on my trade page in the near future.

And speaking of trading... 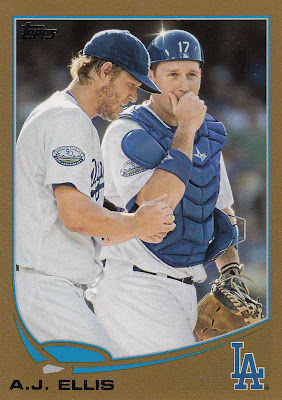 I finally got my first gold card of the year.  Neat photo.  Numbered 0025/2013.  This can be had by any Dodger collector of gold fanatic for the princely sum of one card in return.  I don't care what it is, but I'm itching to do one of these fashionable PWE (plain white envelope) trades with someone.  Any takers? 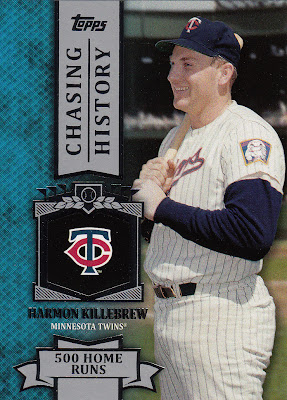 I still haven't changed my opinion of this insert set, "Chasing History".  I still really like it!  Enough so that I'll probably try to track down all the cards.  It won't be high on the priority list, but I think it'll be a neat set to gather.

And, finally, the best card that came from both blasters -- the yin to the yang that was the weed-whacked Nolan Ryan mini: 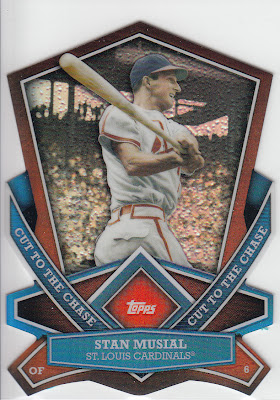 I was midway through my second blaster when I came across Stan the Man.  I nearly forgot about this insert set, since I didn't get one in my hanger box purchase from earlier in the week.  I am so happy to have gotten Musial's card from this set.  I had been looking for a nice Musial card from eBay on which to splurge ever since his passing.  I think this fits the bill nicely.

Oh, I nearly forgot.  And you might be wondering, Why hasn't he mentioned anything about the commemorative patch cards?  Yes, I did get them -- one in each box.  And, despite my previous statements of disdain for manupatches, I will admit that I really like the direction Topps took with this year's edition.  I got two of the rookie card patches, and both of them are really nice pieces.

What's that?  No, I won't be sharing them here.

Why?  Well, both cards feature a player in a certain uniform  And, I will be mailing them out to a certain blogger who collects players on this certain team.  I don't know if this person even likes these patches or cares to collect them, but he will undoubtedly enjoy them more so than myself.  But it's a surprise, see, and I don't want to spoil it here.

Boring, yes.  But, don't worry, I will unveil them at some point down the line after they have been received.

Until next time, have a happy weekend everybody!

I just found out earlier today that one of the shopping malls in my county is having a "sports card and memorabilia show" (is that not a wonderful combination of words?) all weekend, beginning tonight.  So, I think your's truly will be paying a visit on Saturday...