Splurging for the Splendid Splinter 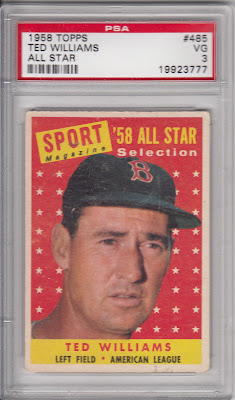 Not too long ago, Mrs. K and I got back from the card show Concord Mall (followed by stops at the Chinese buffet and BJ's Wholesale Club).  Normally, I like to drag out the drama of my card show purchases, saving the one or two "big" items for the end.

In this case, I'l not bury the lead.  For the price of a blaster box, I bought the above card of Ted Williams.  And I'm simply ecstatic to actually own an actual card of the Ted Williams.

When I first saw it laying out with a few other discounted items, I knew I wanted this card.  Yet, I left it behind and went off for another hour or so of wandering about and searching through dime boxes and such.  I told myself I'd stop by that table on my way out and, if the card was still there, I'd make my own.  Graded or not, weathered or not, it was a card of the greatest hitter of all time.  And, not owning any original Williams cards, I figured this might be one of the few chances I'd be able to have one for a reasonable price.

And, well, it was still there when I passed by the second time.  Had that not been the case, I'd probably be using this same space to tell of my lament for not just indulging in it at first glance. 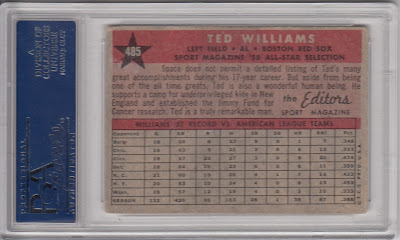 I'm not sure what most collectors' opinions are of graded cards, but I like them just fine.  I don't like paying the extra change that usually goes along with buying a graded card, but in this case I don't feel that I was doing so. After all, even though this one received a grade of Very Good 3, I think it's in nice shape for a 1958 card. Furthermore, the PSA (or BGS) cases provide a nice, safe eternal resting place for the card.

Bottom line, I don't know if I overpaid, underpaid or hit the bulls-eye   And I'm not much concerned, either. Just having a Teddy Ballgame card is worth it, regardless.

Just reading the back of this particular card leaves me in awe of what this man was able to accomplish during his career.  The 1958 season marked Williams' 17th in the pros.  As detailed on this card, Ted swatted away for a .388 average with 38 home runs during the '57 campaign.  Not bad for a man of 39, right?  And take a look at his team-by-team splits.  They tell the tale of what was probably either immense hatred or off-the-charts respect for Williams in the city of Cleveland.  In 18 games versus the Tribe in 1957, he hit .474 with nine round-trippers.

Beyond this treasured piece, I had a great deal of fortune on all sorts of collecting levels.  Some new stuff, some shiny stuff, some vintage, some autographs.  After I sort through everything over the next day or so, I'll share some of my new additions.

Thanks for stopping by, and enjoy the weekend!