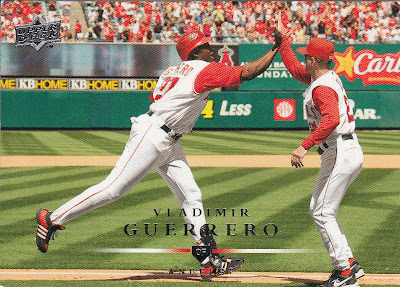 When I began blogging, I absolutely looked forward to meeting new collectors and eventually working out trades with them.  I've been very fortunate to accomplish both of those tasks and then some.

And, as with most things, each trade partner has their own style.  Not just in the cards they include, but in how they package the cards and present them, etc.

But the one thing all of the bloggers I've encountered have in common when it comes to trading is their propensity to be overly-giving.

Nick from Dime Boxes blog is a prime example of this.  If you're a baseball card blogger, you've most likely traded with Nick, probably on various occasions.  Not only does the guy produce an A-plus blog both in content and quality, but he's a hell of a dude.

And he puts together a mean trade package.

The card above -- the great Vladimir Guerrero -- is very emblematic of Nick.  Firstly it's a Vlad card and, well, Nick's an avid collector of his.  Secondly, it's a tremendous photograph.  Just the kind you'd find getting the royal treatment on the Dime Boxes blog.

Thanks to all the great Guerrero cards Nick included, I'm very close to breaking the 200-card barrier for Vlad. That is by far the largest player collection I have!

Other goodies that I received?  Glad you asked. 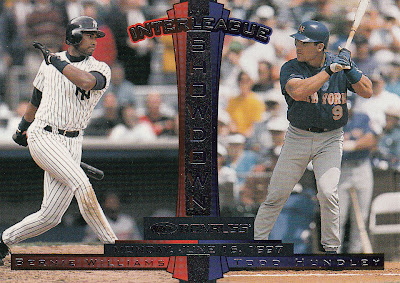 Man, this card instantly brings me back to June 1997, the first year of interleague play.  My buddy Joe and his family split Yankee season tickets with another couple families.  One of the games their family had was the middle game of the first-ever regular season Subway Series between the Mets and Yanks.  And I was invited to attend!  What a thrill it was.  I'll probably never attend a World Series game, and I've never been to a playoff game.  But this was pretty darn close to how I'd imagine it.  The atmosphere at the Stadium that night was just electric.  Sadly, the Mets didn't prevail (damn you, David Wells), but I'll never forget the excitement.

While we're talking Mets, here are a pair of neat cards of some lesser-known Metropolitan catchers: 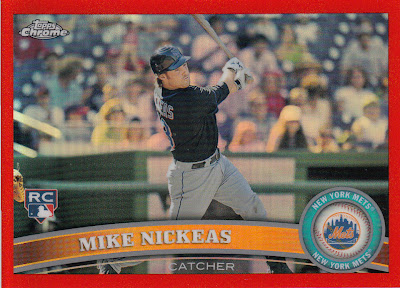 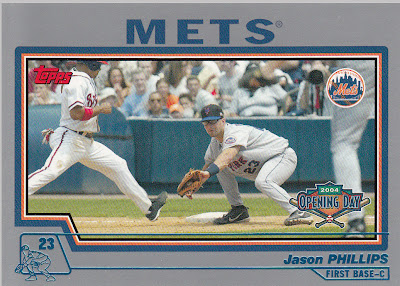 I think I've made this comment on the blog previously, but you don't remember and I don't either.  So I'll state it again.  Jason Phillips is most likely the slowest baserunner I've ever witnessed in a major league game.  But, the bespectacled Phillips was a fan favorite.  Well, at least I liked him.  Okay, I really just liked his stylish rec specs.  Sue me.

Another guy who was an absolute slowpoke on the base paths was John Olerud.  But he sure was an artist with the bat and a master with the glove.  Nick is also an Olerud collector and was able to share some of his extras. 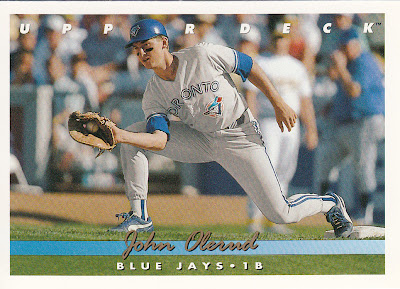 This 1993 Upper Deck card was my favorite of the lot.  Another gorgeous horizontal card from this set.  Man, I think I may seriously have to pursue this set some day.  I'll just add to the million other set pursuits I guess.

These next two cards are certainly not mainstream products.  And that's what I love about them. 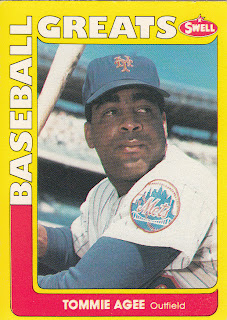 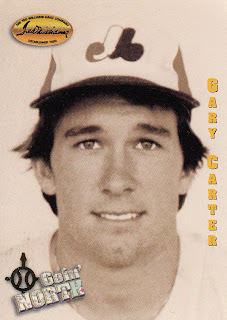 I really love this Agee.  One of the heroes of the '69 Amazin Mets.  It's from a 1990 Swell bubble gum set.  On the right, an angel-faced Gary Carter is highlighted on this card from the 1994 Ted Williams set.  The 1975 NL Rookie of the Year kinda reminds me of Jack Tripper from Three's Company in this portrait.

From oddballs to short prints, here we have a duo of Mets heroes from the past: 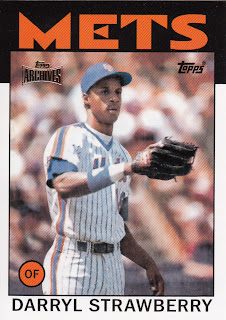 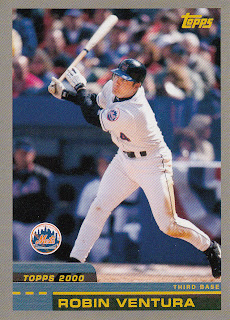 Both are from 2012 Archives.  The iconic 1986 Darryl is an Archives reprint, while Rockin' Robin is card No. 237 off the short-print checklist.  Very cool!

The Archives reprint wasn't the lone Strawberry card I received. 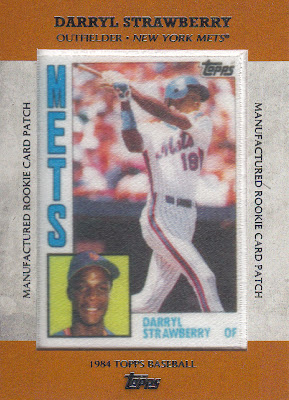 Bingo!  I finally have a rookie card patch from 2013 Topps to call my own!  I had previously bought a pair of blasters and received two of these patch cards.  But, they were players on a certain team which I felt would be more appropriately housed in another blogger's collection.  And they have since be mailed away.  This Straw patch, on the other hand, will be all mine!  I'm a bit curious why Topps didn't choose his '83 Traded card as the subject of this patch.  That is his actual rookie card, after all.  Anyhow, this manupatch is a real beauty!

While the patch card is a rare piece, the following card is cut from an even rarer stock. 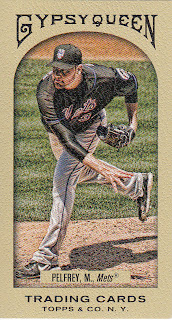 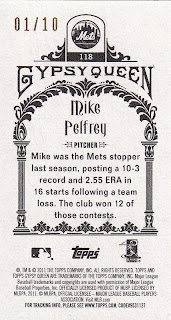 Not only is this card one of only 10 in existence, but it's No. 1!  I have very few Gypsy Queen and A&G minis, but recently have been considering adding more to my collection.  I'd say this Mike Pelfrey is a terrific addition. 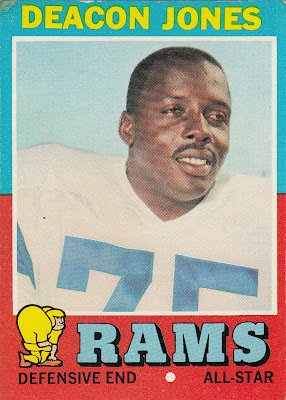 This is the very same 1971 Deacon Jones card that Nick showcased on a blog entry not too long ago.  I loved it when I saw it on his blog that day, and I love it even more in person.  This is probably my favorite vintage Topps football design.  And Mr. Jones is perhaps my favorite player from those bygone days.

As you can clearly see, I was the recipient of ridiculous spoils.

Thanks for all the amazing stuff, Nick!