Almost There (and quickly!)

When 2013 Topps arrived and I was able to get my hands on the various insert cards, I was of course intrigued by the '72 minis.  I loved collecting the '87s from the 2012 edition, but that's mainly due to personal connection I have to that 1987 Topps set.  They were, after all, the baseball cards I cut my teeth on.

So, when it came to this year's retro minis, I was wishy-washy.  Sure they are fun, colorful cards, with a nice mix of current and retired stars.  But was that gonna be enough to drive me to chase the entire collection?

To that question, an obvious answer availed itself at Sunday's card show.  Mixed into one of the dime boxes at my new favorite seller's table were hordes of those '72 suckers.  At 10-cents a pop, working towards completion of the 50-card set seemed like a no-brainer.

And so it was decided.  When the smoke cleared and I sorted through my purchases back at the Kaz manor, I counted 36 different minis.  Added to the 13 that I already had, that left me ONE card shy of a finished product.  The odd man out?  The Iron Man himself, Cal Ripken.  Living in Delaware, Orioles and Phillies stuff is usually scarce or over-priced, so I'm not shocked that I didn't stumble upon Cal.

Anyhow, chasing after just one card is way better than having a dozen or more still M.I.A.

In case you haven't seen it yet, here's what the almost-complete set looks like... 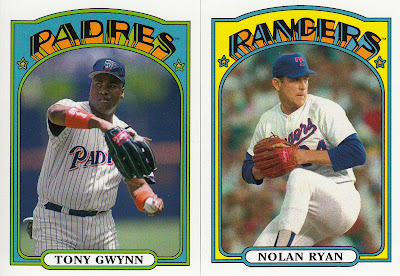 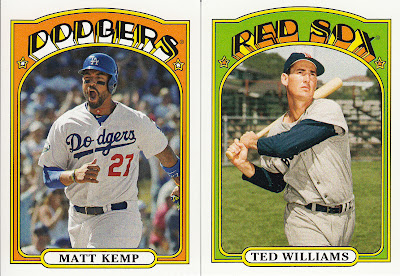 In the event you are curious, the Ripken card would slide right in between Nolan Ryan and Jim Rice.  And, FYI, I already had the Trout and Harper cards.  I wouldn't expect to find those two in any dime boxes any time soon.  Maybe a decade from now.

All told, this is a pretty snazzy-looking collection.  My top three favorites, in no particular order, are Braun, A-Rod and Votto.  The Trout is pretty darn cool, as well.

I'm kinda curious how/why Matt Kemp's card ended up towards the end of the checklist among the HOFers. Perhaps that slot was originally labeled for Mantle?  I don't know, but I sincerely doubt they mapped out the player order and felt that Kemp logically fit between Lou Gehrig and Ted Williams.

Also, what's Buster Posey doing at the card no. 1 position?  I thought we were going alphabetically by city?  Oh well, he was a league MVP and won another World Series ring last season; I guess he can go wherever he darn well pleases.

I can only hope the Series 2 and Update minis also find their ways into dime boxes.  But, that would be too easy...