It is truly a great day in the world of baseball card collecting (and, to a lesser degree, in blogging).  Not only did I find 2013 Heritage blasters at the Wal-Mart near my school, but we've finally come upon the top card in the 2012 Heritage countdown.  I snagged a pair of said '13 blasters, and shall be diving into them later on.  In the meantime, here we go with the countdown's conclusion.  Eleven other cards have been ranked and reviewed on this blog by your's truly, but none can claim the catbird seat.  That lofty position belongs to just one card, and it is this one: 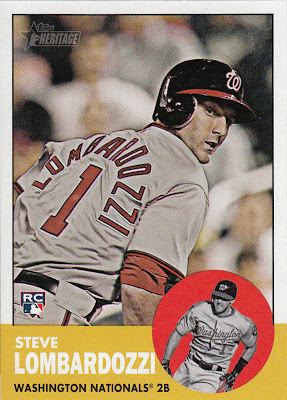 Is this a controversial choice?  Random?  Out of left field, so to speak?  I would imagine that to be the prevailing thought with many who might happen upon my ramblings.  If you've been following this countdown from the start, or even if you picked it up somewhere along the way, perhaps you take one look at this card and say, "This is his choice for the top card of the set?!"  After all, I've reviewed some pretty fine cards over the course of the past couple weeks.  Some with superior household name power, some with flashier photography.

But, whether you agree with this selection or not, you can't say that this ain't a unique baseball card.

This card and the Hosmer card (No. 2 on the countdown) are kind of related, at least in my mind.  Both feature photographs that you wouldn't expect to find in a Heritage set; both are nighttime settings; and both are short-printed cards.  They also happen to be the two cards I pined for the most when I initially delved into the SP hunt.

And while the Hosmer card has a greater element of bells and whistles, the quirky simplicity of this Lombardozzi card makes it attractive.  In other words, if the two cards were sisters, this is the sister who doesn't have to cake on the makeup or sling on the high heels to be a looker.

By the slumped angle of the body and the craning of the neck, I would guess that Lombardozzi, the son of a former big leaguer, is leading off one of the bases.  Or perhaps he's preparing to lunge back into the bag? Whatever the case, we can see the full last name displayed on the back of the jersey.  And boy is it a long one. So long, in fact, that it's forced to wrap around his number.  I certainly know how he feels, having a 10-letter last name myself.

If aesthetic explanations aren't sufficient, I can only offer this: I just like this dang thing.  I'm sure all of you out there who collect sports cards know what it is to like a certain card for no apparent reason.  Other than "just because."  Maybe no one else can see it, but you certainly can.  Some cards have a way of endearing themselves to us like that.  I've got the same sort of relationship with the '89 Topps Chris Sabo.  You know, the rookie cup one.  It's just a card I've loved since I was nine.  Who knows why.

Might I also add that after a summer-long period of hoping for this Lombardozzi SP via pack ripping or reasonable eBay auction, I stumbled upon it for the princely sum of one penny at a card show during this past autumn.  If that doesn't scream It's meant to be! then I don't know what does.

So there you have it.  My top choice.  I apologize if you're left mystified or underwhelmed.  All bias aside, though, I still think this is a pretty neat card.  Steve Lombardozzi, you might not be the top of anyone's list, but you've always got a place here at the Clubhouse.