A check of my local Wal-Mart on the drive home turned up zero 2013 Heritage packs or boxes.  No biggie, I didn't expect any to realistically turn up til Tuesday.  And, if I have to wait til Wednesday, so be it.  I plan to purchase a hobby box from my LCS anyhow.  Though it would be nice to find a few retail packs in advance. Anyhow, let's get on with the '12 countdown... 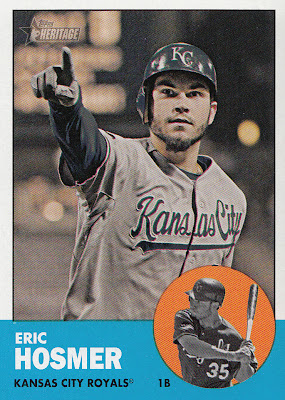 Despite what Eric Hosmer may seem to indicate with his finger gesture, his short-printed card isn't the No. 1 card from the 2012 Heritage set.  At least not in my estimation.  Though, one could hardly blame him if he -- or anyone -- considered it as such.

Hosmer might not be an Albert Pujols or Mike Trout in terms of star power, but you can't deny the out-of-this-world composition of this card.  Like I stated in my prior countdown post, this card scores big terms of 'style' as opposed to household name branding.

A very unique photograph of the Royals first baseman, formerly the top prospect in the Kansas City organization. Then again, to say this is a unique photo is an overwhelming understatement when it comes to Heritage cards. Who or what Hosmer is gesturing at is a mini-mystery, which makes this a perfect "short print" card.  I'm of the mind that SPs oughta have a little quirkiness to them.  So, in that regard, this one is a home run.

Another star -- perhaps the biggest star -- on this card's resume stems from the dreamlike background, which consists of a smeared palette of scoreboard light bulbs and street lamps.  This, of course, lends further intrigue to the card.  To have the distant stadium features appear hazy and out of focus is a tremendous touch and very fitting for the vibe of the card.

And, obviously, we've got a piece of nighttime at the ballpark captured on cardboard, to which I know at least one blogger would lend a thumbs up.  Check out the reflections from the house lights painting their impressions on Hosmer's helmet.  Beautiful.

This card hypnotized me from the moment I set eyes on it, and I was thrilled to acquire it as part of COMC's end-of-year sales bonanza.

But, there's still one more card from 2012 Topps Heritage that makes me swoon unlike any other...