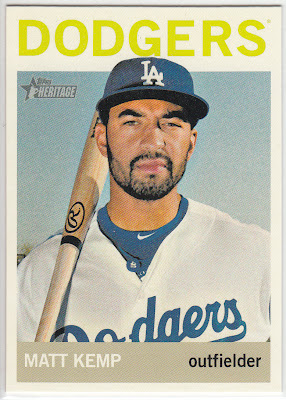 I finally got around to purchasing a hobby box of the brand-new Heritage at my local hobby shop on Thursday.  It was a little lot pricier than I had anticipated, but I went through with it anyhow.  I had been waffling about the value of the hobby box after seeing some of the retail luck other collectors were having.  But, many months back, I had promised myself I'd go the hobby box route with Heritage.  And if I didn't follow through, I'd probably give myself the cold shoulder for a few weeks...

So now it's time to tell you how I did.  Just the 'hits' and inserts.  I will spare you the base cards.  At least not this time around.

One very cool card I got was the above color variation of Matt Kemp's short-print No. 450.  Per the odds listed on the wrapper, these are seeded one per every 155 packs.  Essentially, that means there is one every six or seven boxes.  I guess that's impressive.  Personally, I would've liked to gotten one of the action photo variations, which are more attainable at 1:26 packs.  But, I'm certainly happy to land the Kemp.  By the way, how about the snarl on his face?  Yikes! 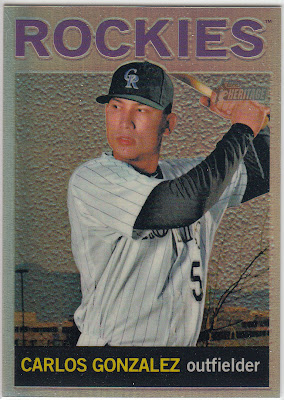 This is a chrome refractor, numbered 174/564.  These are found one every 42 packs.  So, again, I beat the odds, I suppose.  Nice card of one of the game's best all-around players. 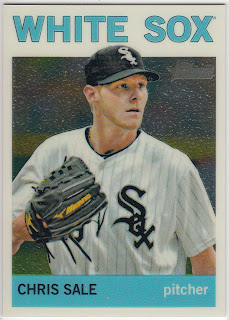 This is one of the regular chrome parallels.  One every 24 packs, or one per hobby box.  I like how the Carolina blue color scheme looks on the White Sox cards.  Not exactly doing backflips for Chris Sale, though. 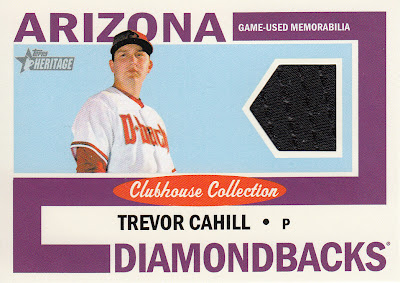 *Sigh*  I almost wish I had just gotten an extra base card or two instead of this.  Does anybody wish for these relic cards anymore when buying a box?  Maybe if it also had an autograph on it...or wasn't a Diamondbacks pitcher.  I only hope there is a Cahill collector or Snakes fan out there who might covet this. 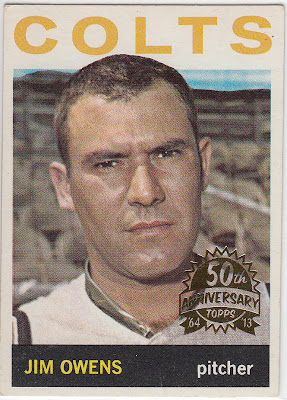 I'm not sure how I feel about these cards.  The individual wrapper for this card exclaims, "1 Original 1964 Card Inside!"  Except, it's an archival card adulterated with a gaudy faux-gold stamp.  And it even has four dinged corners.  I just hafta throw my hands up about this gimmick.

Now, onto something a little more my speed: Short prints! 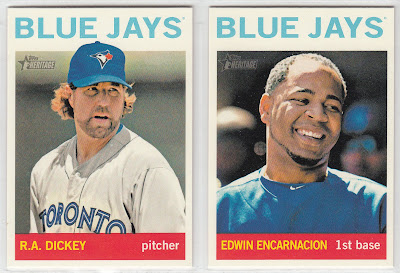 The Blue Birds were well represented.  A couple of good players to get right there.

A trio of Nationals.  Good players all, but not a Harper or Strasburg among them.  Rats.  By the way, how many freakin' Nats players are on the SP checklist?!

These three round out the SP crop for this box.  Alas, no David Wright, Mike Trout, Mike Stanton etc.  I have a feeling I'll be pulling my hair out trying to get all of these dang things.  Have I stated this before?  Well, I just stated it again. 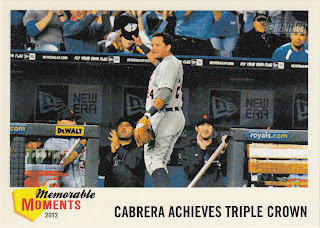 The Memorable Moments cards continue to impress.  Neat photo of AL MVP Miguel Cabrera, who was the first player to grab a triple crown since Yaz in '67.  All-Star teammate Justin Verlander even makes a dugout cameo. 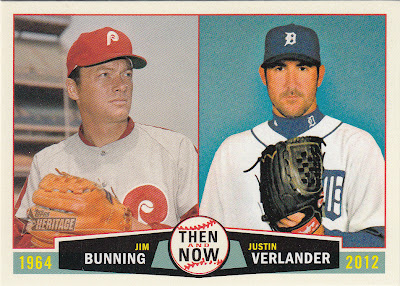 Another Tiger sighting, courtesy of Then and Now.  I'm a fan of the Jim Bunning photo because it was taken at Shea Stadium. 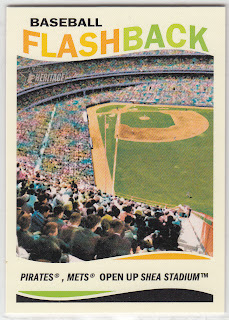 Ah, Shea Stadium.  The former home of the Mets opened for business in 1964.  Great card!  I'm pretty sure I've taken in a game at ol' Shea from perspective. 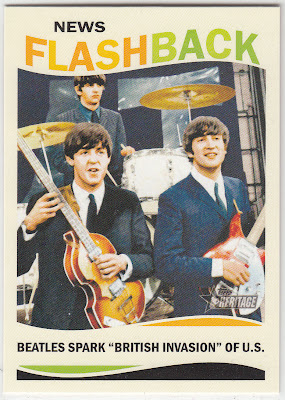 This is a fab card, too, but I won't be keeping it.  I know a fellow blogger who might like to add this to his rock 'n rollers collection.  By the way, whither art George?!

If you thought we were done with Miguel Cabrera and R.A. Dickey you were wrong!  I like these New Age cards more each time I see 'em.  Even though he's north of the border, I'll still continue to collect cards of Dickey.  I'm a fan of his for life.

Anyhow, those are the highlights.  Are you underwhelmed?  May I be honest with you?  I can't say I would make this purchase again if I had to do it over.  Don't get me wrong, I definitely like the oodles of base cards and various inserts -- some of which are hobby-only -- you get in these boxes.  And it's always fun to rip lotsa packs, naturally.  But unless you get a crazy hit like, say, a Harper auto or a Trout variation card, you really don't get your dollar's worth.

But, Mark, can't you say the same about every baseball card purchase nowadays, especially so with Heritage?

Ummm, no comment.  Trying to remain positive, damn it!

Wow, what a bummer of a way to end this post, huh?  Sorry about that, folks.  I'll do my best to be a tad more chipper (or shall we say Larry?) in the future.  In the meantime, I'll probably be tapping the brakes with Heritage -- or any -- purchases for a little while.