No Brutus, But A Pair of Trade Packages 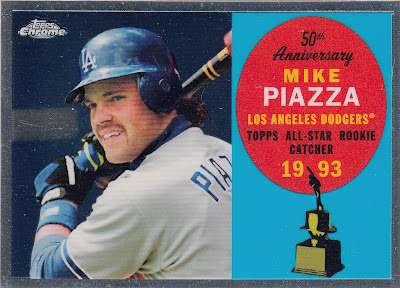 It seems like Friday is a popular day for trade packages to arrive in the Kaz mailbox, and yesterday was no exception.  Beware the Ides or March?  Hardly!  [Ed. Note: Sorry, Caesar...]

To my delight, yellow mailers arrived from Texas and New York.  I'll begin with my first-ever swap with Joe from NY, who resides in the Sandlot.  A fellow Mets fan and Piazza collector, Joe contacted me about some extra Piazzas he had accumulated which were absent from my P.C. list.  Like the chrome beauty up top. 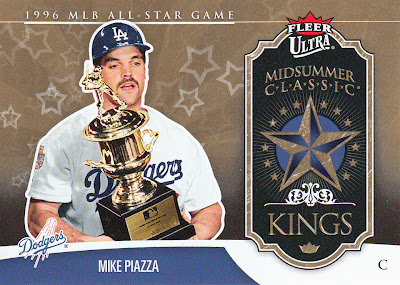 Piazza used the '96 All-Star Game at The Vet as an occasion for further pronouncement of his stardom.  He homered and doubled in the NL's victory, snatching a pretty sweet trophy in the wake of his heroics.  Though, the facial expression leads one to believe Mike began the 'party' before leaving the field. 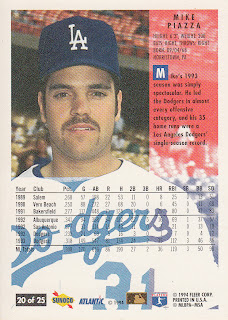 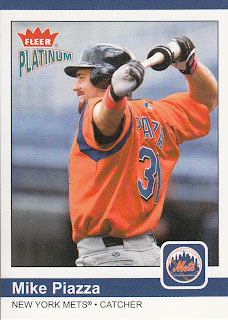 On the left, a 1994 Fleer Sunoco oddball.  Joe left the following inscription on the protective penny sleeve: "Rare?  No.  But something a lot of people will miss."  Right you are, sir!  The front of the card looks like a regular 'ol 1994 Fleer base card.  Anyhow, a great and, shall we say, non-mainstream piece for the collection.  Love it!

On the right, 2004 Fleer Platinum.  It's tough to find these Platinum cards on the secondary market, whether at shows or via vendors.  And if you do, boxes or lots are usually outrageously priced.  Thus, it's always exciting to come across one of your favorites in Platinum form.  Kind of a cool spring training shot of Mike here. 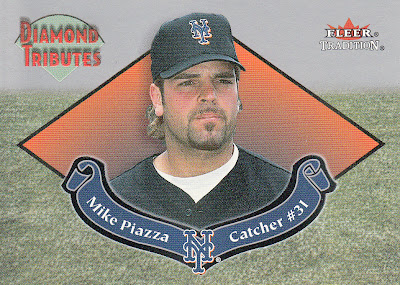 The third Fleer card out of five highlights.  I'd say that's a pretty fair indication that I miss Fleer!  I've stated this many times before, but I think Fleer had some of the best inserts out of all the major manufacturers.  They were sometimes tacky or downright silly, but they were always creative and memorable.  This is a Diamond Tribute insert from the 2002 set.  A bust of Mike inside of an orange diamond laid in a field of Astroturf.  What's not to like here?

Joe, it was a pleasure to receive these and all the cards you sent.  I hope we can trade again in the future!

Next up on the trade agenda, the waxcaptain, who fed into my Wal-Mart blue parallel addiction with nine fresh new cards!

Here are four of my favorites... 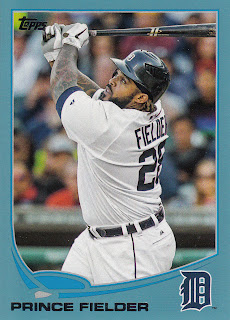 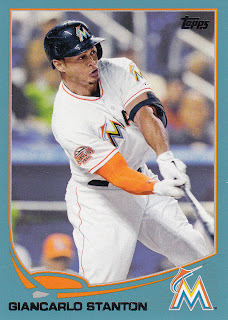 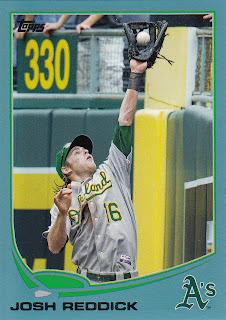 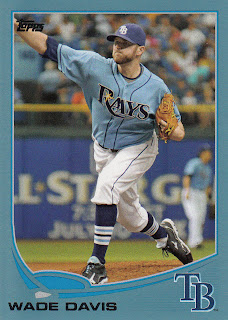 Was really excited to cross poster boy Prince off my checklist, as well as "Mike" Stanton.  The Reddick features a great SP-worthy photo (though, it ain't an SP), while Wade Davis' jersey looks oh-so-right on this blue-bordered presentation.

Oh, and one final piece to waxcaptain's package was this offering from the 2012 Series 2 "Gold Standards" insert set: 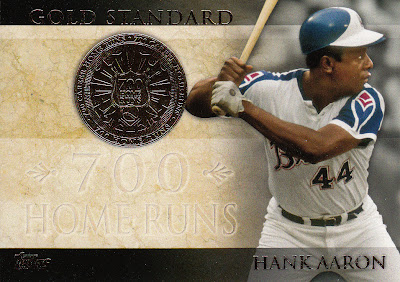 Yep, I'm still working on this dang thing.  I think I'm now down to just four cards needed to put it to rest.

My second trade with Victoriano (aka waxcaptain), and another happy result.  Many thanks, sir!

Hope everyone out there has a safe and enjoyable St. Patty's Day weekend...