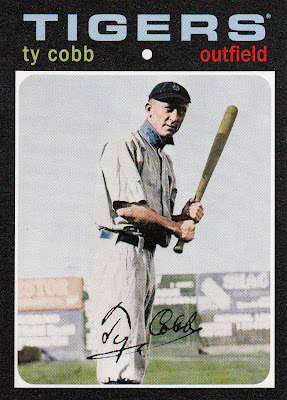 In my last post, I detailed the wonderful abundance of 1972 Mini inserts from this year's Topps set that I was able to accumulate out of a single dime box.  That, plus the baker's dozen that I already owned, put me one card short of a complete insert set.

That wasn't the only insert set I attacked out of that box, however.  In 2010, Topps produced a 50-card insert collection called Vintage Inserts, which featured 25 Hall of Fame players depicted on base-card designs that either preceded them or arrived post-retirement or death (or both).

At the time of its release in 2010 through this past Sunday, Vintage Legends never interested me.  Nothing therein moved me to pursue the cards.  But, for some reason, seeing these cards again (or, in certain cases, for the first time), I was really into them.  It's not like this insert set features a novel idea.  Retired players on various card designs from Topps' historical catalog has basically become old hat over the past decade, thanks to products like Heritage and Archives.

But, maybe it was the inclusion of players like Pee Wee Reese and Jimmie Foxx that hooked my intrigue.  Or the fact that, these days, I'm just way more into cards of HOF players in latter-day sets.  Also, I like how the back of the card relates the player's performance from a prime year to the year from which the card design comes.  In other words, how would Ty Cobb's 1911 performance have stacked up to the league's best from 1971. A pretty neat Strat-O-Matic type of concept.

I don't know this for a fact, but I'm thinking this 50-card set was released in two 25-card waves split between Series 1 and 2 Topps.  I could be completely wrong about that, but that's my best guess.  Some further proof: the Cobb card above is number 36, while the other Cobb (in which he's shown on a '56 Topps card) is card number 20.  No player has both their cards fall within the top half of the checklist.

Anyhow, here are the rest of the Vintage Legend cards I found from my box hunting last weekend:

That's a pretty decent beginning to the collection.

I'll definitely be on the lookout for these at shows in the future.

I'm not sure if I'll be posting again before the weekend, so I want to take the opportunity to wish everyone out there a Happy Easter! (and a Happy Passover, as well!)