Only four cards remaining in the countdown.  With the official release date of 2013 Topps Heritage on the horizon (March 6, hobby), we're all getting very excited here at the Clubhouse.  And by "all" I mean myself and maybe one of our two golden retrievers.  But likely just me.  So, forward we go (or is it backwards?) with the countdown, getting you, me and the doggies psyched up for the new cards... 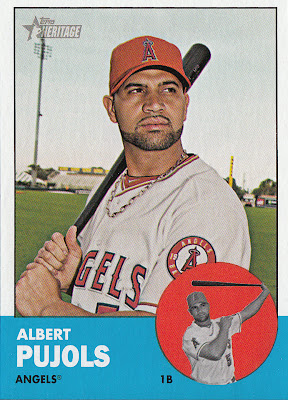 While our No. 5 card represented the curtain closing on a player's decorated career, this one represents the beginning of a new era for a slugger in his prime.  Albert Pujols, arguably the game's best hitter, certainly made waves prior to the 2012 season by trading in his red feathers for a golden halo.

For we the collectors, that meant a whole new frontier for baseball cards of King Albert.  It also meant the zit-faced millionaire nerds at Topps HQ would go scrambling to their computers to begin Photoshopping all those action shots of the Cardinal-clad Pujols.  To their credit, they did a pretty decent job on Albert's card in the '12 Topps flagship.  As we all know, that isn't always true.

Is the above a Photoshop job?  I mean, it most probably is.  Or perhaps they used a publicity photo provided by the Angels and digitally dropped in the spring training background?  Your guess is as good as mine.  Whatever it is, it looks pretty legitimate.  Then again, it's a lot easier to make Photoshop magic look legit with the faux-grainy Heritage photos than those on one of the glossy releases.

Regardless of how Topps arrived at this photo, Albert Pujols's card from 2012 Heritage is a top-5 card in my estimation.  It's a clean and timeless presentation, and Pujols looks pretty focused.  The accent colors used in the bottom quarter of the card nicely match the motif of the Anaheim California Los Angeles Angels uniform, which is always a plus.

Bottom line: Any time one of the giants of the game switches zip codes, that first card of him showing off the new threads is a big deal.  And when it's presented in a classically attractive and harmoniously colorful way, you've got a grand slam of a card.