A pair of eBay auctions that I won early last week arrived in Saturday's mail... 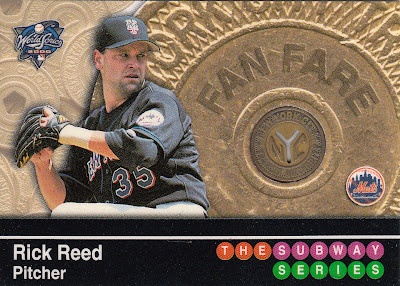 This first one is from a special 2000 Topps set commemorating the Subway Series between the Mets and Yankees.  That's an actual NYC subway token embedded into the card, which features pitcher Rick Reed.  From what I understand, there were one of these special relic cards inserted into each boxed set. 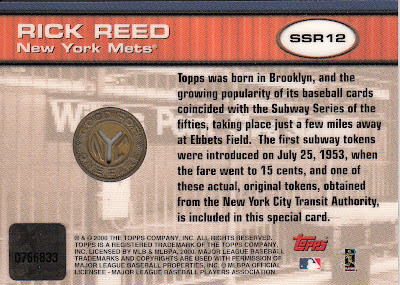 Most of the other token cards I've come across previously on eBay were way too pricey for my budget.  Then again, many of those featured more desirable players, like Jeter or Piazza or Rivera.  But, this Reed card suits me just fine; after all, he was the starting pitcher in the lone game the Mets won in the '00 Series.  And, at $6.99 delivered, I was happy to add this bit of history to my collection.

The  other acquisition wasn't quite as exciting, but made me happy just the same. 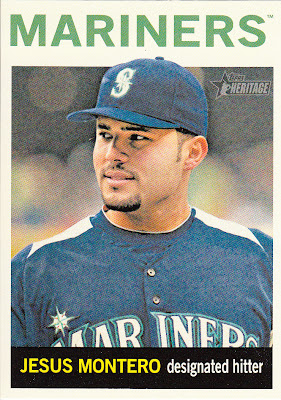 A 2013 Heritage SP of Jesus Montero.  But not just one; two came in the auction.  I picked them up for $1.99 delivered, which means less than a buck per card.  Pretty decent considering what Heritage short prints are going for.  And, getting two was nice -- one for the set and one for my small-but-growing Montero collection.

It turns out that these cards were just the tip of the iceberg from this weekend.  A little while ago I got back from the monthly card show at my local fire house.  I debated whether I was gonna go or not (I'm trying my best to be conservative with my money), but in the end gave in to my compulsion.  I capped myself off at twenty bucks, though.  A small concession for a weak man, I suppose.  Hey, I never said I was perfect!

Anyhow, more on that a little later...