And then there were three...  The 2012 Heritage countdown has been whittled down to a precious three cards. Which is convenient since the brand-new Heritage cards are due to arrive at your local hobby store in just three days.  The wait is nearly over, fellow Heritage fans! 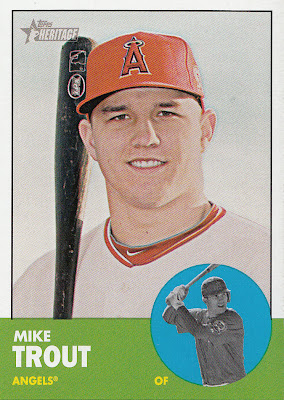 Earlier in the countdown we had back-to-back Blue Jays.  And with the designation of Mike Trout to the No. 3 slot, we now have belly-to-belly Halos.

I gave Trouty the edge over Albert Pujols for this position because, well, is there a hotter name in the baseball card market than the kid from Millville, NJ?  I don't mean to label King Albert's cards as passe, but he's certainly not as in-demand these days.  Hey, it happens to the greatest of them.

Besides, Albert's card was his first Heritage entry as an Angel; this is Trout's first Heritage card, period.  And if the reigning AL Rookie of the Year can turn his 2012 production into a perennial occurrence, this may well end up being a landmark card in the history of Heritage cards.

That, however, is still classified as an "if" for now.  Circumstance and/or injury have a foul way of playing havoc with the careers of ballplayers across all the major sports.  I certainly wish Trout well and hope this is just the first step in what will become a hallowed baseball career.  If I redo this same countdown in 10 years, Trout very well may wind up being the top card of the 2012 set.  Alas, for right now, he's a second runner-up.

That's not to say I didn't wrestle with the notion to place this card atop the list.  Because I absolutely did.  But, I choose style over substance for the two top spots, as you will see over the next couple of days.

This card, while certainly not an eyesore, just isn't that visually exciting.  It's a portrait-style photo that would fit in seamlessly with those cards of the original 1963 Topps set.  So it gets full marks for its archival appeal.  That, however, is just one faction of the rubric.