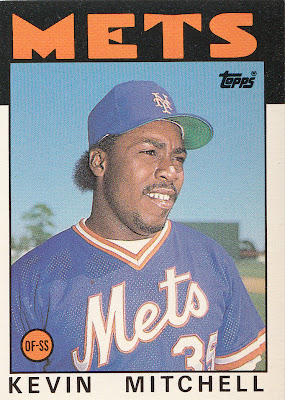 I'm not sure why I foster a special kind of love for all those wonderful Traded and Update series cards from the '80s.  Well, actually, I do know the reason: 'Cos I never had any of them when I was growing up.

I don't know about you, but I never came across Topps Traded packs in any the famous retailers of the time.  Or if I did, I guess I don't recall.  And Fleer didn't sell packs of their Update series as far as I know; they were just sold as sets.

Anyhow, any time I encounter these cards at shows, I kinda leap at the chance to gather 'em up.  In this case, I found a vendor at Sunday's fire hall show that had a bunch of these for just a dime each (or 15 for a buck).  The guy had 99% football cards, except for one row of a monster box that contained, among other things, Topps and Fleer cards from 1986 or '87.

The few '86 Topps Traded cards that were of interest to me were kinda miscut, but for 7 cents each, how can you balk?  The above Kevin Mitchell is one of my favorites from an '86 Traded set that contains oodles of well-known cards.  Will Clark, Bo Jackson, Wally Joyner, Andres Galarraga, etc.

Oh, and Barry Bonds, too. 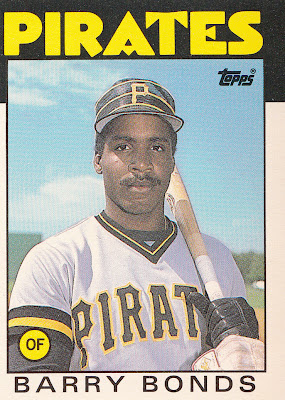 Yes, this one is pretty badly miscut from left to right, but for less than a dime, I finally got my own copy of one of the iconic Topps rookie cards of the '80s.

Fleer Update from '86 and '87 were well represented in the mix, too.  I completed the Mitchell trifecta with his Update cards from each year, respectively. 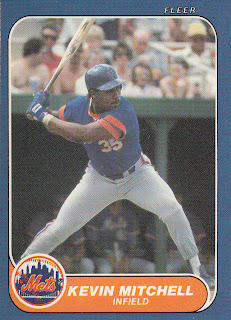 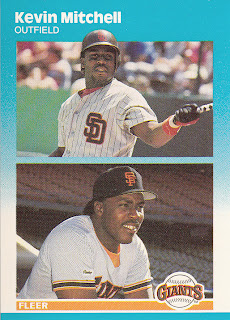 Mitchell was a busy man in 1987.  After getting swapped from the Mets to the Padres in December of '86 in the Kevin McReynolds deal, Mitchell played 62 games for the Friars in '87 before getting dealt at midseason to the Giants.  I can't think of another Update or Traded card in which a guy gets the two-uniform treatment. Pretty great!

I like the different shades of blue utilized by Fleer in these two successive years.  More so the '86 edition that went with the navy-colored borders. 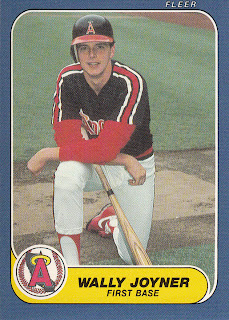 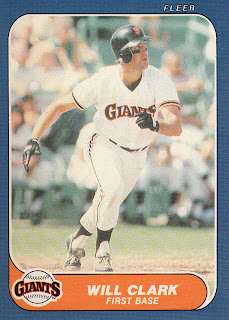 I've always kinda had a thing for Wally Joyner cards.  When I was a kid, I was always confused about Joyner being a big leaguer, since there were guys on my Little League team who looked older than him.  As for the Clark, I have a couple copies of this one already.  But, three is better than two when it comes to Will Clark rookie cards!

Then, in 1987, the Fleer border design trended more towards the sky blue motif. 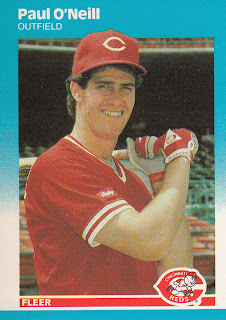 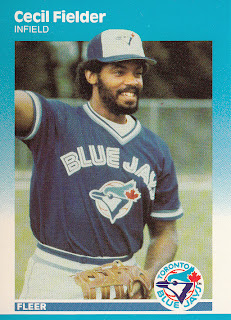 As much as I hated Paul O'Neill when he was a Yankee, I still get a kick out of collecting the guy's cards.  Truth be told, he woulda been one of my heroes if he played the bulk of his career in Queens.

Does anyone remember Cecil Fielder being that svelte?  Me neither!

In terms of the per-card price tag, these were by far the best pick-ups at Sunday's show.