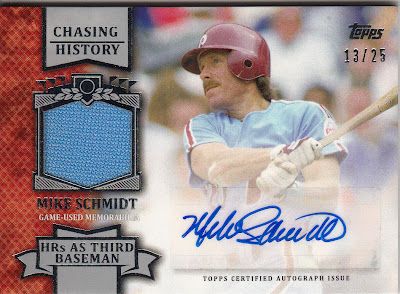 So my sister got me an Amazon.com gift card for my birthday.  And I was all set to burn through it on assorted prog and classic rock CDs (anybody still buy those 'compact disk' things anymore?) when an idea clicked into my head.  Hey, I said to myself, I haven't bought one lick of Series 2 Topps yet; why not look into getting a hobby box of the stuff if the price is right?

Wellp, that's what I did, and today the sucker arrived.  The crown jewel of the box is right above.  I would have likely exclaimed something similar to the corny title of this post, but I was kinda speechless at the time.  This is one pretty auto/relic card.  And that's coming from someone who doesn't usually do backflips for relics or sticker autos to begin with.  But, for Michael Jack Schmidt, on such a rare platform, I'll go cuckoo for Cocoa Puffs in this instance! 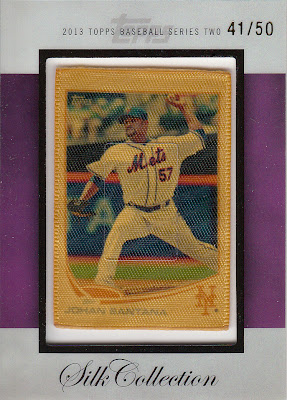 This was the other 'big deal' in the box, and I must say I'm quite proud to own it.  Even if Mrs. K things it looks like an old shirt tag, she still was diggin' it.  Because, of course, like a child, I ran into the next room each time I pulled something significant and had to show her.

Anyhow, I yanked one of these silk do-dads from a hobby box of Update last year, but have since shipped it off since it was a White Sox player of little interest to me.  It's very cool to actually obtain such a unique card of a guy who wears the right colors -- Mets colors, of course!  And a historic player in Amazins history, to boot.  He may never pitch a game for the Mets again, but you can't take away the man's no-hitter.

So, those are the main highlights.  No need to bore everyone with all the rest, since those sort of things have been posted eight ways to next Sunday all around the baseball card blogging web already.  Then again, I did get a few cool inserts and parallels that are perhaps noteworthy, so maybe I'll torture you with those in a future post.  Who knows.

In the meantime, thanks for checking in.  And, if you're a East Coast person such as myself, stay cool in this wretched heat!