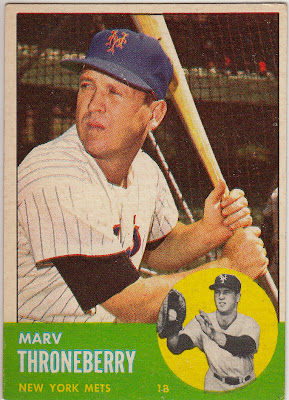 The part of my brain dedicated to card collecting has seriously been overtaken by all this All-Time Mets Project business. So much so that I've kinda put 2013's set pursuits -- Heritage and Series 2 flagship -- on the back burner.  In fact, at the Concord Mall sports and hobby show this past weekend, I didn't even attempt to search for any cards to help any of my set collecting needs.  Instead, it was all about combing through dime and nickel boxes searching for Mets.  Old Mets, new Mets, forgotten Mets, lousy Mets -- you name it.

But, let me not get too off-tracked.  This post isn't about all my card-show finds from the weekend; that'll have to wait til later this week.  Instead, I've gotta make up some ground on the Mets additions that arrived from my recent eBay prospecting.

When I first envisioned doing the Mets project, one of the first names/cards that came to mind is the one you see above.  "Marvelous" Marv Throneberry is one of the most notorious figures from Mets lore.  But, unlike Tom Seaver, Jerry Koosman or Gary Carter, Throneberry's notoriety didn't stem from his on-field greatness.
Rather, Marv became the iconic posterboy from the lovably inept days of New York's newly-minted National League club.  Scorned throngs of Giants and Dodgers fans who saw their favorite teams whisked 3,000 miles west flocked to the Mets in 1962 and, so happy to have NL baseball back in the Big Apple, placed little to no importance on quality of play or results.

And that's where Throneberry came into focus.  Once a highly-prized power-hitting prospect for the Yankees, Throneberry's numerous defensive gaffes and baserunning blunders during the '62 season are the stuff of sports mythology.  Real, fabricated or exaggerated, these anecdotes endeared Marv to the masses in spite of it all.

I've read conflicting accounts of Throneberry's reaction to this goofball mystique.  In some renderings, Throneberry took it all in stride, and actually played up the persona.  Conversely, I've also read about how Marv took the facetious treatment of his exploits with copious amounts of sadness.  Consider, after all, that this guy at one time was regarded as the next Mantle when he was bashing his way through the minors.  To fall from that height to being the butt of jokes for a historically inept ball club can't be an easy pill to swallow.

Anyhow, Throneberry is an important piece in the patchwork of Mets history, and I was thrilled to snag his 1963 Topps card for a mere 40 cents (plus shipping).

To be fair, it should not have taken me this long to get a copy of this card, Mets project or no Mets project. But, better late than never.

In a separate transaction, I was able to scoop up a seven-pack of Mets from 1965 for about four bucks shipped. All in pretty good condition. 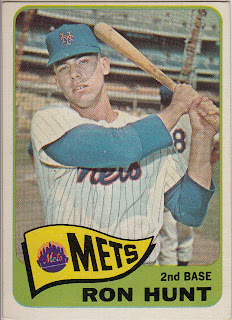 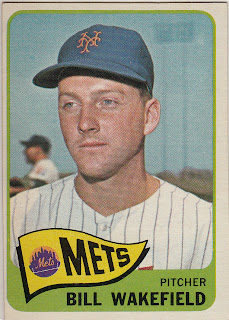 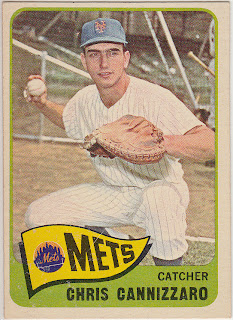 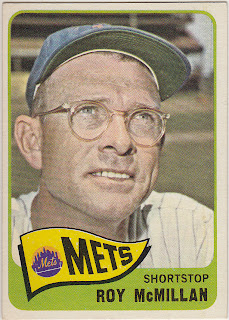 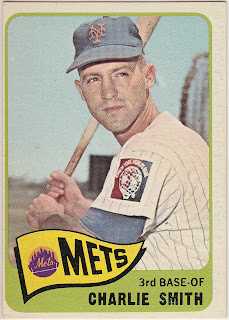 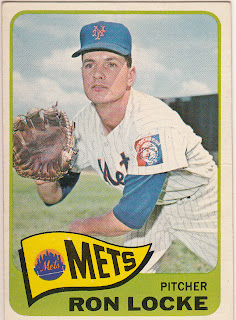 I know the '65 design, replete with the neat little team flag, is a favorite among most collectors.  And I can't raise a dissenting voice on that front.  [Ed. Note: Boy, is next year's Heritage set is gonna be under major scrutiny or what?!?]  Not even the curious combination of a green inner border and a yellow pennant can muck up these cards.  Furthermore, Mets cards from '65 are likely to feature the ultra-cool 1964 New York World's Fair patch, as seen on the left sleeves of Messrs. Smith and Locke. 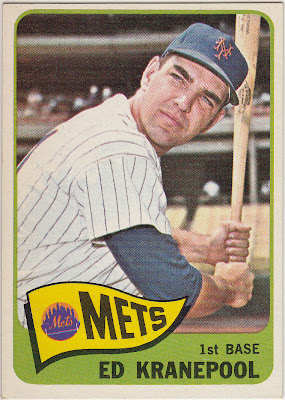 This was by far my favorite of the lot.  If not for the big-baseball-headed mascot who runs around Citi Field, Ed Kranepool would be a prime candidate for the Mr. Met moniker.  Seaver was the Franchise, yes, but Kranepool was the ironman of the franchise.  He played 1,852 games over 18 years for the Amazins -- by far the longest tenure of any player to suit up for the Mets.  He debuted in 1962 as a cocky 17 year old from the Bronx and bowed out after the 1979 season at the age of 34.  Kranepool would make his lone All-Star team in 1965, the same year as this card.  That, coupled with a great portrait shot of Kranepool, makes this a prime choice for binder inclusion.

Not counting the Kranepool or Hunt cards (since I already had cards for each), that's six more pick-ups for the ATMP.  A pretty good appetizer for the 20+ additions that awaited me at the Concord show...