If Wright is Wrong, Then I Don't Wanna be Right 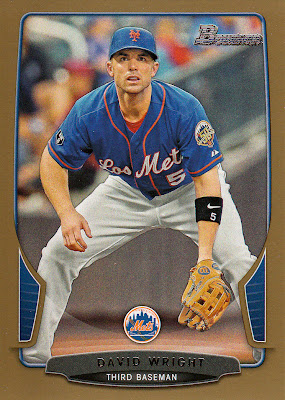 I hope all the crying and moaning has subsided in Western Pennsylvania.  Pedro Alvarez has been added to the N.L. roster of the super-important, life-altering event known as the Home Run Derby.  Because, you know, home-field advantage in the World Series depends upon the outcome of the Home....

Okay, we all know that Alvarez should have been a no-brainer pick by captain David Wright for the Home Run Derby squad.  We get it.  Then again, what are we talking about here?  It's a 'fun' exhibition event made even sillier by baseball's decision to elect team captains for each side.  And God forbid Wright should use the opportunity to select to the squad a boyhood friend who also happens to be a major leaguer.  If the derby was such an important mile marker in the baseball season -- one that should be observed with pomp and reverence -- perhaps they should have let Joe Torre or one of the other stiffs in the league office select the respective sides.

After all, the fans -- in spite of a pretty objective job with this year's rosters -- have proven themselves routinely incapable of choosing the right people for the actual All-Star Game (remember that thing?).  It's funny that the same people who probably stuffed the ballot boxes with votes for guys like Garrett Jones are the same ones criticizing Wright.  But, I digress.

I support David Wright insomuch that I don't care who "wins" the Home Run Derby.  I mean, let's stop fooling ourselves that league identity beyond the DH even exists anymore.  Players change teams and leagues more often than their underwear, and interleague play has become the norm.  I 'like' the National League because it's the league of the Mets.  No more, no less.  Furthermore, when did the Derby become a team event?  At the conclusion of the event, one hitter is left standing.  Not a team.

Okay, enough ranting.  Time to show some cards.  The Bowman Gold up top is a holdover from my recent card store visit.  The only thing better than a David Wright card is a golden David Wright card.

And the only thing better than a golden David Wright card are David Wright cards that arrive in the mail from a fellow blogger.  Pat, of Hot Corner Cards fame, recently shot me a trio of Wright pieces via PWE. 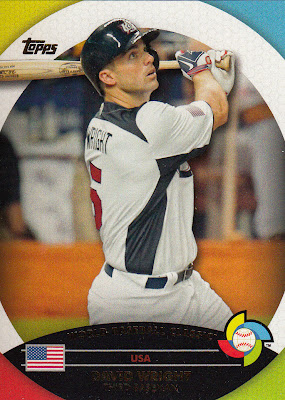 This is the first World Baseball Classic insert I've come in contact with.  Not the most impressive design layout, but it's fitting for an event that I'm kinda lukewarm on.  Though, to be honest, I got into it a lot more during this last go-round than previously. 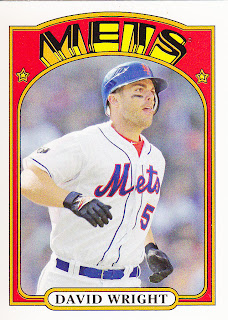 Another insert from Series 2 Topps, and this time it's the return of the 1972 minis  I like the mini retro sets, so color me a sap.  I just wish Topps hadn't chosen to smother us with the '72 design by including it in Archives, as well. 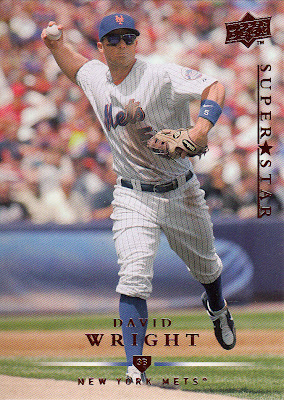 This is a variation of 2008 Upper Deck I've not come across.  The UD logo and embossing are all gold, while a "Super Star" inscription has been vertically added to the right-hand border.  Of course, a great action photo of the Mets All-Star is at the core.  A pretty sharp-looking package when you put it all together.

Thanks for the Captain America cards, Pat, and keep it hot over there in the corner.

And may we all -- even those in Pittsburgh, PA -- enjoy the Home Run Derby next Monday.